by peteblack4ua@gmail.com | Apr 15, 2021 | Courage Under Fire, Determination Despite the Odds, Limitless Possibilities | 1 comment 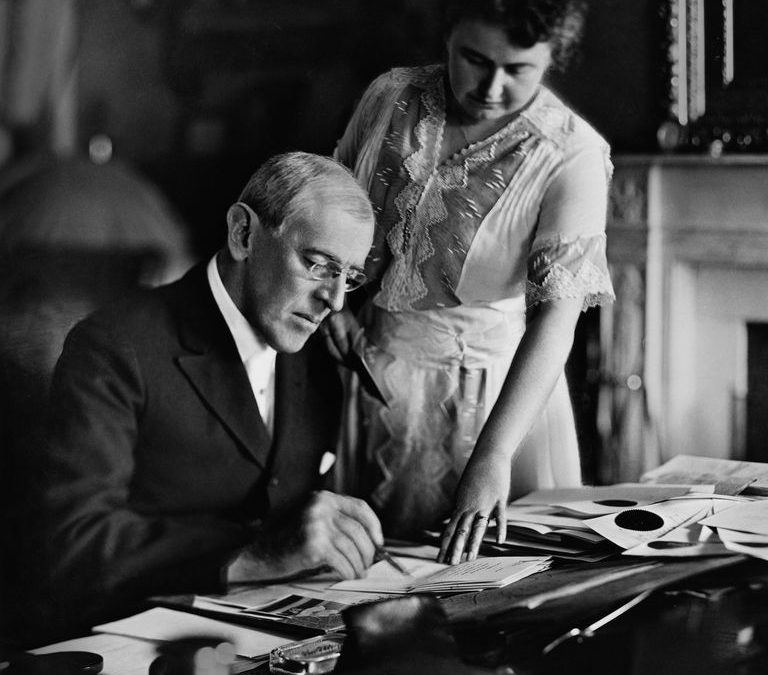 October 2, 1919 – The White House, Washington, D.C.: When Edith walked into their private bathroom at the White House, she found her husband, President Woodrow Wilson, lying on the floor. She immediately summoned the White House doctor. Upon examining Wilson, the doctor declared, “My God, the president is paralyzed!” Wilson had suffered a stroke, leaving him with slurred speech, the loss of his bodily functions and paralyzed on the left side.

The doctor recommended rest and total isolation. He instructed Edith to tell no one in the public and he recommended that she manage the day-to-day running of the White House.  A year before women were granted the right to vote, Mrs. Woodrow Wilson seemed a most unlikely candidate to seize control of the world’s most powerful country.

Born in 1872, Edith Bolling grew up in Wytheville, Virginia. Beautiful and intelligent, she only had two years of formal education and was mostly taught at home by her grandmother. At age 24, Edith followed her sister to Washington, D.C., where she met and married Norman Galt, a prominent jeweler. Galt died unexpectantly 12 years later, leaving Edith a jewelry store to manage.

Born in 1856 in Staunton, Virginia, Woodrow Wilson majored in political science and history at Princeton University. After college, he attended the University of Virginia Law School but dropped out after a year due to poor health. After trying to practice law for a year, Wilson returned to Princeton as a professor. In 1902, he became the University president.

Wilson was elected governor of New Jersey in 1910 and just two years later defeated Theodore Roosevelt to win the U.S. presidency. In 1914, Wilson’s first wife, Ellen, died from kidney disease. The president was so distraught he considered resigning, but staff members talked him out of it.

The first time the 56-year-old Wilson saw Edith Galt, a friend of his cousin, it was love at first sight. Soon Edith was being chauffeured to the White House in the evenings for dinner with the president. When Wilson’s political advisers learned he was planning to marry the 40-year-old widow, whom he had known for only three months, they had deep concerns about the impact on his political career. They were unsuccessful in changing Wilson’s mind and he married Edith in a quiet ceremony on December 18, 1915.

Wilson won reelection in 1916. From the beginning, Edith was the president’s constant companion in the White House. He involved her in diplomatic matters, insisted she attend key meetings, had her review documents before he signed them, and over the objections of his staff, he even trusted her with classified information.

For several months before his stroke in the fall of 1919, the president had suffered from severe headaches. Following the end of World War I, Wilson had been working long days hoping to convince Congress and the American people to endorse the League of Nations peace plan.

In 1919, there wasn’t a presidential succession plan. So, after her husband’s stroke, Edith got busy overseeing White House affairs. She ran the government from Wilson’s bedroom. The doctor assured her it was the only way to keep him alive. Edith controlled which staff members and Congressmen had access to Wilson. She reviewed important documents and helped him sign them. She always kept his left hand covered to conceal the extent of his paralysis.

The newspapers were told the president was suffering from exhaustion and just needed bed rest. America did not see the president for five months. Outside of the White House inner circle, few people ever knew about Wilson’s condition. Despite being repeatedly ridiculed by Congress and the press for her “petticoat government,” Edith Wilson served competently as America’s chief executive for 17 months until her husband’s second term ended in March 1921.

After leaving the White House, the Wilsons bought a home in suburban Washington. The former president remained an invalid until his death in 1924. Edith was active until her death on Woodrow Wilson’s birthday, December 28, 1961, at age 89, a few months after riding in President John Kennedy’s inaugural parade.