by peteblack4ua@gmail.com | Jul 1, 2021 | Against the Odds, Determination Despite the Odds, Long Shots 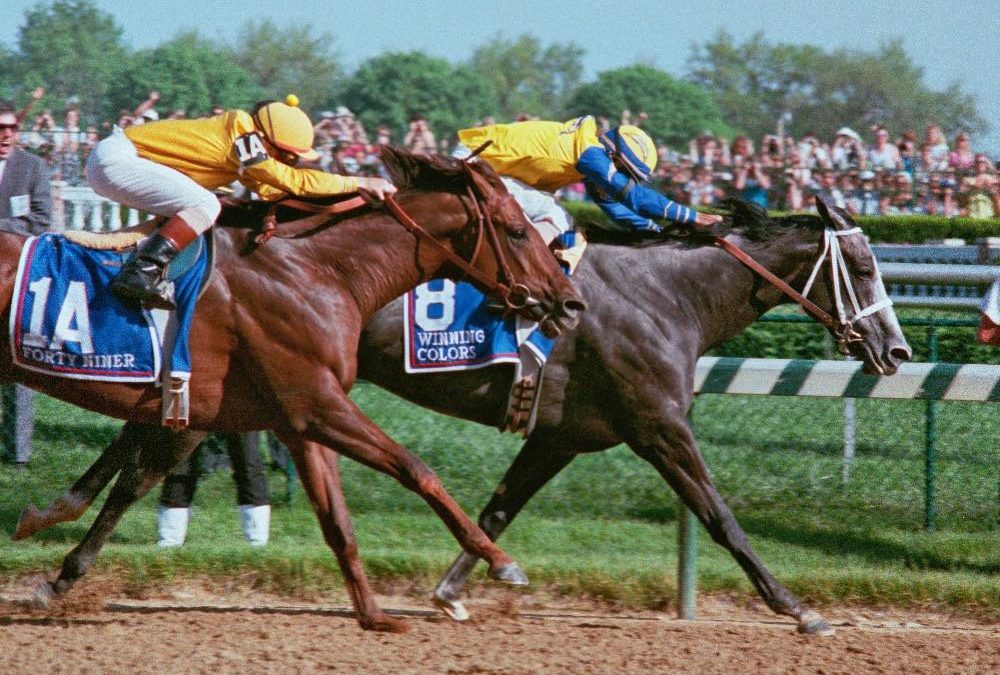 May 7, 1988 – Kentucky Derby – Louisville, Kentucky: The ladies came early. They came in record numbers with their painted signs and their flamboyant, frilly hats.  Believing the bigger the hat, the better the luck, they filed into Churchill Downs, the most famous horse track in America. And they placed their bets, hoping it was going to be a day for the one filly in the field of 16 colts.

They came to cheer for Winning Colors, a tall, leggy athletic gray horse with white splotches across her face. At 1,100 pounds, she was the biggest horse in the race. Only two fillies, Regret (1915) and Genuine Risk (1980) had ever won the Kentucky Derby in its 115-year history. The odds were against Winning Colors.

Horse racing fans mostly staked their money on Forty Niner, the champion 2-year-old colt, or undefeated Private Terms. Few thought about placing their paycheck on Winning Colors, who had only been raced five times.

Eugene Klein owned Winning Colors. He had sold his San Diego Chargers NFL team to focus on his new passion, thoroughbred racing. She was trained by Wayne Lukas, the nation’s most successful trainer. In the past decade, Lukas had won every major race. Only one goal eluded him. He had entered 12 horses in the Derby without a win, and Lukas and Klein were anxious “to get the Derby monkey off their back.”

Lukas had grown up training quarter horses in Texas and Oklahoma. He knew from experience that thoroughbred fillies could run against the males and beat them in prestigious races. However, Lukas’s last filly in the Derby in 1984 finished dead last. So when Winning Colors made the 17-horse field, the laughing and joking by other owners and trainers began.

Was Winning Colors the filly to break the curse and win the Run for the Roses? Lukas and those who knew her best were convinced. After she won her second race in December 1987, Winning Colors stable hands pooled their meager savings. They drove from Santa Anita, California, the horse’s home track, to Las Vegas to bet $2,000 on Winning Colors to win the Kentucky Derby at 100-1 odds.

Winning Colors lost in her first race in California in February 1988. There was nothing to indicate she could compete with the boys in Louisville. But a month later, when she blew away eight colts by seven lengths, Lukas decided to give her a shot in one of the best fields in Derby history.

The first Saturday in May was a beautiful cloudless day. At 6:03 p.m., when the bell sounded, as was her custom, Winning Colors took control of the lead from the start. She opened up a four-length lead in the backstretch and maintained it through the turn. With just over six football fields remaining, a win in the Derby seemed imminent – but Winning Colors had never run a mile and a quarter before. Lukas feared she might tire and fall back. Forty Niner and Private Terms were quickly closing while the long-legged gray filly was obviously tiring.

Jockey Gary Stevens left his whip idle. Instead, he let the reins out a notch. Winning Colors got the message. Time to let it all out and head for home. Stevens felt the surge as the big horse found another gear. Winning Colors dug deep in the final 12 seconds to win by a neck on Private Terms.

The ladies in attendance rocked Churchill Downs, and Winning Colors’s Kentucky Derby win erased a decade of heartbreak for Eugene Klein and Wayne Lukas. She was the clear choice for the champion 3-year old filly in 1988 and her legacy as a Kentucky Derby winner will live forever.

In 2000, Winning Colors was inducted into the National Horse Racing Hall of Fame. She lived until 2008, when at the ripe old age of 23, she died at her post-racing home at Green Tree Farms in Lexington, Kentucky. In 2015, Sports Illustrated named Winning Colors one of the 10 most memorable horses in Kentucky Derby history, and she remains one of three fillies to ever win the Kentucky Derby.

“Nothing feels better than doing what other people say you can’t do.”    Kylie Francis