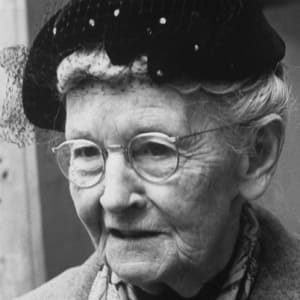 1860, Greenwich, New York: Anna Mary Robertson was born on a farm along with five brothers and four sisters. She did her share of the chores around the farm. At age twelve with money scarce, she began hiring out to work on more affluent neighboring farms. She pursued this work until age 27, when she met and married another hired farmhand named Thomas Moses.

Anna Mary and Thomas heard Yankees could get rich in the South after the Civil War, so in 1887 they moved to the Shenandoah Valley in Virginia where they hired out as tenant farmers. Anna Mary churned butter and made potato chips to supplement their meager income.  By 1905 they had saved enough money to buy a small farm in Eagle Bridge, New York, close to where she was born.

Anna Mary helped take care of the livestock, gardened, canned vegetables and was known for her jams and jellies at the local fairs. When she was in her fifties, her daughter suggested that she take up needlepoint and embroidering. Anna Mary fell in love with the craft, giving her embroidered pictures away to anyone who would take them.

When arthritis made needle pointing painful, a friend encouraged Anna Mary to consider painting pictures. At age 75, she began painting seriously. Her first paintings were done on cardboard with house paint on an old kitchen table in a small utility room. Anna Mary painted from her farm experiences. Her paintings told stories about making butter, soap, syrup, or candles. She loved painting farm scenes with Halloween, Thanksgiving, and Christmas themes. She painted farmhouses, churches, and families planting gardens.

Anna Mary gave most of her paintings away but occasionally sold one for $3-5 at a fair to help supplement her income. At the request of a local drugstore, she exhibited some of her paintings for sale in the store window. The paintings sat idle in the window for two years gathering dust.

On Easter weekend in 1938, Louis Caldor, a collector of local folk art from New York City, happened through Eagle Bridge and discovered the paintings in the drugstore window. He bought all the paintings and went to Anna Mary’s small farmhouse where he purchased 10 more. Caldor promised to make her famous. She thought he was crazy.

Caldor took his collection of Anna Mary’s paintings to New York City art museums. Although several museums admired the artwork, when they learned the artist was 78, there was no interest in an art exhibit. In 1939 Caldor persuaded the New York Museum of Modern Art to display three paintings in a private viewing but got little reaction from viewers.

Wearing a black hat and lace dress, the feisty, straight-talking 80-year-old Anna Mary Moses delighted the New York Press Corps. On that November day in 1940, the career and the legend of Grandma Moses was born. She began to exhibit her art in New York City and upstate New York. Over the next two decades, Moses fame spread nationally and then internationally.

Moses could not understand what the fuss was all about, once telling a reporter, “If people want to make a fuss over me, I let ‘em, but I was the same person before as I am now.” She was amazed that people were willing to pay such high prices for her paintings. Artwork that once sold for less than $5 in Eagle Bridge, frequently garnered $8,000 to $10,000.

At age 93, Grandma Moses was featured on the cover of Time Magazine and Life Magazine did a cover story on her 100th birthday. She was a prolific artist, completing 1,600 paintings in her lifetime. Anna Mary Moses painted until her death on December 13, 1961, at age 101.

“It is never too late to become what you might have been.”      George Eliot