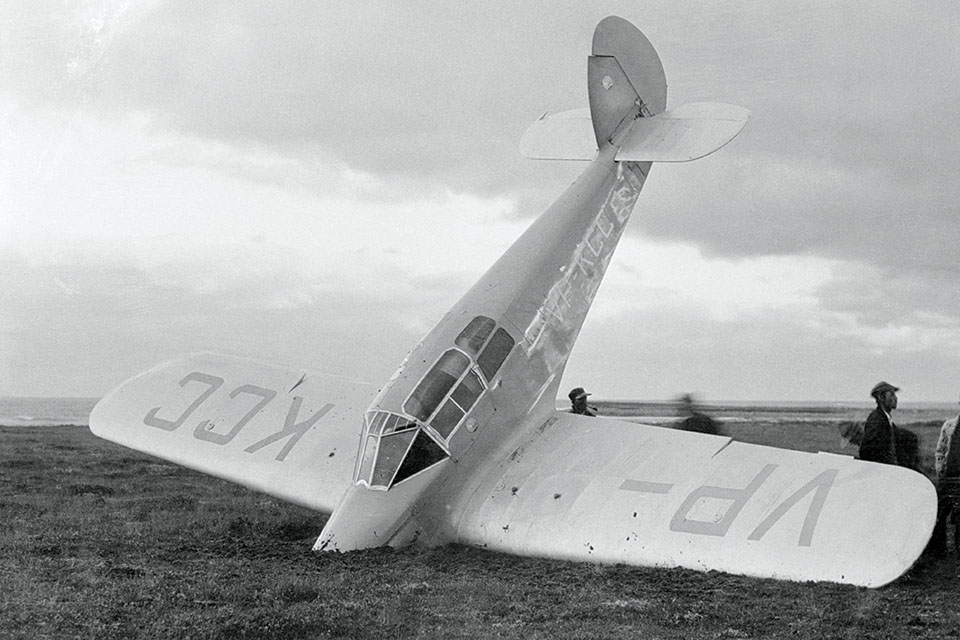 September 4, 1936 – Over the North Atlantic Ocean: At 10:30 p.m. the first gas tank ran dry sooner than expected, and the plane’s engine sputtered and died. Beryl Markham groped in the dark cockpit for a flashlight as the plane drifted back to earth. Finding it, she opened the valve on the second tank, but the engine did not restart as designed. Begging the engine to restart she helplessly watched the altimeter spin. At less than 100 feet above the water, the engine finally exploded to life. Markham breathed a thank you, pulled back on the stick and felt the plane begin to climb.

Born in 1902, Markham grew up on her father’s thoroughbred racehorse farm near Nairobi, Kenya. Under his tutelage, at the age of 18 she became the first female certified racehorse trainer in Africa. A decade later, she forgot about horses the day she first saw an airplane. In 1931, Markham became Kenya’s first female bush pilot and started carrying mail for East Africa Airways.

African villagers, many of who had never seen an airplane or a white woman, referred to Markham as “the lady from the sky.” She was the first to pioneer spotting elephant herds from the air for safaris.

A wealthy friend approached Beryl at a party and commented, “Several pilots have flown the Atlantic west to east. Several have died trying, but nobody has done it alone from England. I know a chap who could build a plane that would do it. Want to give it a chance?” Markham always up for a challenge didn’t have to think twice.

The plane, a single-engine Vega Gull, was built at the Percival Aircraft Works in Gravesend, England. Special gas tanks were fitted around the pilot’s seat to increase the plane’s range to 3,600 miles.

Before she departed, Markham’s flying instructor spelled out her challenge. “If you can get the plane off the ground with all the fuel, the trip will take you about 25 hours. The wind and the weather in September will be against you. If you misjudge your course by a few degrees, you’ll end up in the ocean. So don’t misjudge anything.”

At 6:50 a.m. on September 4, 34-year-old Markham left Abingdon Field in England bound for Floyd Bennett Field in New York. She set the altimeter at 2,000 feet and by dark had cleared the coast of Ireland. The weather service had not predicted a storm, but by 11 p.m., shortly after her scare with the fuel tank, the plane flew into a 40 mph headwind as rain pelted the windshield. Markham estimated she had 10 hours to go.

At 6 a.m., Markham saw a ship and the hills of Nova Scotia through the icy window. She was tired and cold but thankful for the sun. The storm had passed. Nova Scotia, Maine and New York lay ahead. Surely nothing else could go wrong. But five minutes later, the engine sputtered, died and then restarted. The oil pressure gauge was normal, but the plane was losing altitude. Markham calculated she was 10 minutes from the airport in Cape Britain, Nova Scotia. She planned to land there for repairs. Then the engine stopped and wouldn’t restart.

Markham managed to avoid trees and rocks as she nosed the plane through the air and into a bog. Unhurt, except for a gash on her head, she was discovered within hours by a local fisherman. It wasn’t the way she planned to arrive, but the following morning Markham arrived in New York by plane and was greeted by a huge crowd. Markham’s bravery was honored with a New York City ticker-tape parade and the distinction of becoming the first woman to fly from England to North America.

Markham’s flight log would read, “Atlantic Flight, 21 hours and 25 minutes from Abingdon, England, to a nameless swamp, nonstop.” She never flew a plane again after her transatlantic flight. After living in England and New York, in 1948 Markham returned to Kenya to raise and train horses. Her horses won the Kenya Derby six times.

“Our greatest regrets at the end of our lives will be the opportunities we left on the table, the passions we didn’t pursue and the dreams we didn’t go after.       Mark Batterson