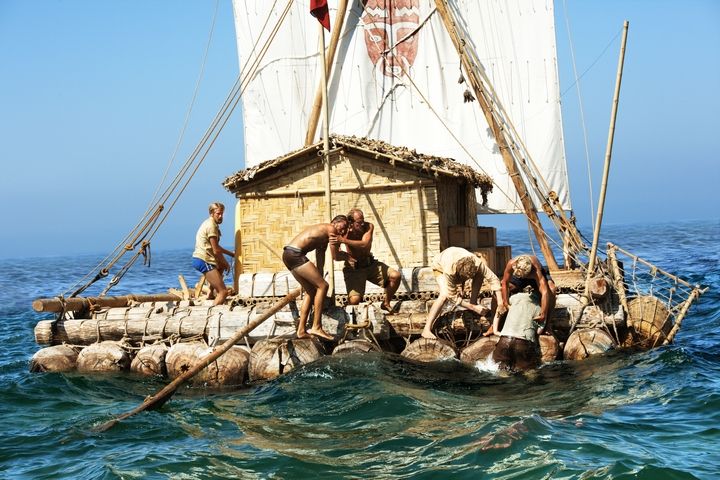 Early April 1947 – Lima, Peru: The Peruvian Navy admiral observed the crude raft being assembled. He turned to Thor Hyerdahl and said, “Mr. Hyerdahl, your father and mother will be grieved when they hear of your death.” Hyerdahl was reminded of the phone call a few days earlier with his wife Liv back in Norway. She had sobbed into the phone, “Thor, you can’t even swim! Please don’t do this to the children!”

Born in 1914 in Larvik, Norway, Thor Hyerdahl almost drowned as a child when he fell through the ice. As a result, he was afraid of the water and never learned to swim. As a teen he became fascinated with all the varieties of animals.

Hyerdahl studied zoology at the University of Oslo, and as part of the program, he spent a year on the Polynesian island of Fatu Hiva studying exotic animals. On huge stones about the island, he observed carvings of men on rafts and became obsessed with how ancient man reached these remote South Pacific islands. When Hyerdahl asked an old Polynesian chief how his people got to the island, the chief responded, “Tiki, the sun god brought us to the island from the land behind the ocean.”

Because of the currents, Hyerdahl believed the ancient people came from South America. He gave up studying animals to prove his theory that Inca Indians from Peru arrived in Polynesia by raft in about 500 A.D.

In 1946, after having dedicated a decade to developing his theory, Hyerdahl had failed to convince anyone in academia that he was right. He had been told numerous times that his idea was ridiculous. There was only one thing left to do: prove his foolish idea. Hyerdahl decided to sail an open raft from Peru to Polynesian, just as he believed it had been done 1,500 years before.

After failing to find funding in Norway, Hyerdahl came to New York hoping to borrow money for his expedition. National Geographic told him they would not finance a man bent on suicide. In February 1947, Hyerdahl flew to Peru, arranged a meeting with the country’s President and finally received his funding. He also got permission to build the raft in the Navy shipyard in Lima.

Hyerdahl convinced five other Norwegian fellows to join him on his crazy adventure. Based on the ancient carvings, they built a 30’ by 30’ raft out of balsa wood logs and lashed them together with rope as the Polynesia warriors had done. The raft included a small sail with a 20-foot steering oar in the rear.

In the early morning of April 28, 1947 a tugboat pulled the “Kon-Tiki” out of Callao Bay in Lima to the ocean. About 80 miles out, the raft caught the south equatorial current that would carry them west toward the setting sun as the Incas had done.

Each day the westerly wind propelled the raft onward, and each day the crew caught fish for food. The large raft easily handled the occasional storm. By day 45 the raft was 2,000 miles from Peru, about halfway to the Polynesia Islands. On July 16, they saw birds from the islands for the first time. Two weeks later, they saw the island of Puka Puka, but strong currents steered them away.

On August 7, day 101, strong currents steered the raft into a reef where it broke up and six thankful men waded ashore. Two days later, five Polynesian men showed up in a boat. They took them to their small village where they discovered the island was named Kon Tiki. Later a boat took the crew to Tahiti where Hyerdahl met the old chief from Fatu Hiva, who greeted him, “You came late, but you come with good news. We now know where our fathers come from.”

Thor Heyerdahl sailed 4,300 miles across the Pacific Ocean to prove his theory. His book Kon Tiki has sold 50 million copies and has been printed in 65 languages. Hyerdahl devoted a lifetime to adventures around the world. He died in 2002 at age 87 in Liguria, Italy.