by peteblack4ua@gmail.com | May 14, 2018 | Courage Under Fire, Determination Despite the Odds, Uncategorized 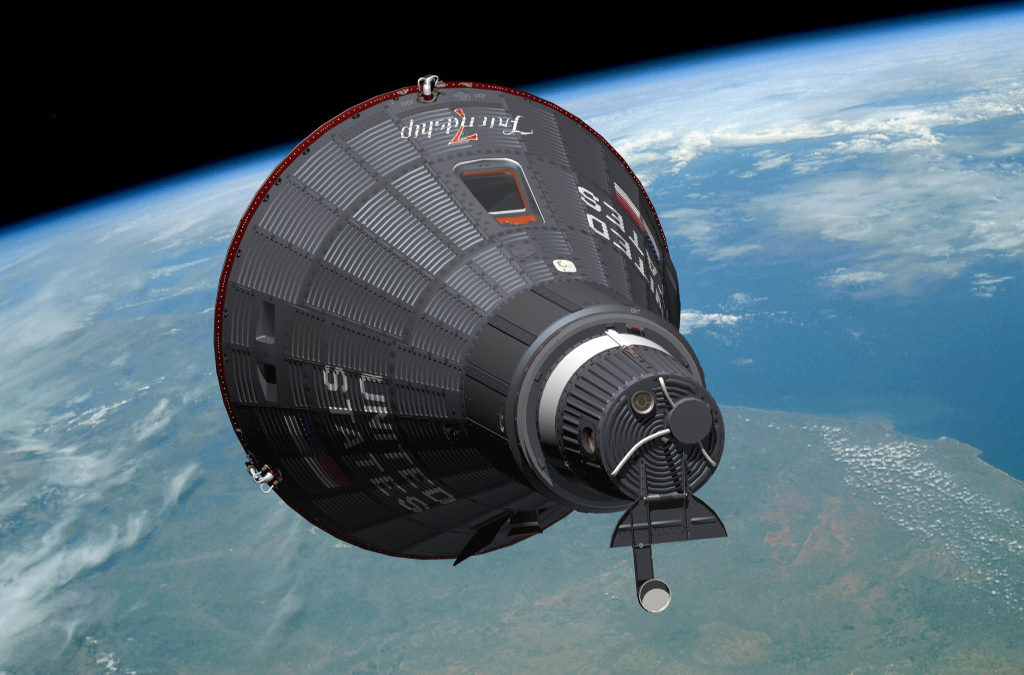 February 20, 1962 – Cape Canaveral, Florida: Imagine being strapped into a small capsule atop a 75-foot Atlas intercontinental ballistic missile.  Well aware that in the past, several previous launches had exploded on take-off, you trust that rocket engineers have the problems corrected. Upon take-off your flight needs to reach a speed of 17,500 miles per hour in order to blast out of Earth’s atmosphere and into the stratosphere.

The plan is to orbit Earth three times in a period of five hours then survive a bumpy ride home, despite temperatures approaching 3,000 degrees Fahrenheit on re-entry to the atmosphere. Project engineers think the capsule’s heat shields will protect the capsule, but if the shields fail, you will disintegrate. Once through the atmosphere, a parachute will deploy, helping to slow the speed of descent before the capsule crashes into the Atlantic Ocean, where hopefully it will float until a rescue ship arrives.

That was the case in February 1962, as 40-year-old Mercury astronaut John Glenn sat in the Friendship 7 capsule atop a rocket, waiting for countdown at Cape Canaveral, Florida. He remembered the words of fellow Mercury astronaut Gus Grissom, who after observing an earlier Atlas rocket explode questioned, “Are we really going to get on top of one of those things?” When Glenn’s wife, Annie, had tried to talk him out of the dangerous mission, he responded as he always did, “I have to go.”

John Herschel Glenn, Jr., was born on July 18, 1921, in Cambridge, Ohio. His father owned a plumbing business and his mother was a schoolteacher. After graduating from high school in 1939, he enrolled in engineering  at Muskegum College in his hometown. He earned his private pilot license and on July 8, 1941, the day after the U.S. was attacked at Pearl Harbor, dropped out of college to join the Marines. As a fighter pilot, he flew 119 combat missions during World War II and the Korean War receiving numerous medals.

After the war, Glenn continued to fly. In 1957, he made the first transcontinental supersonic flight, piloting an F8U-1 Crusader from Los Angeles to New York in record time: 3 hours 23 minutes. Two years later the lieutenant colonel heeded a call for test pilots to apply to be astronauts for the newly formed National Aeronautics and Space Administration (NASA). He was accepted into the program and eventually chosen to pilot the United State’s first space flight to orbit the earth.

After two months of delays due to weather or equipment malfunction, 40 million anxious Americans watched on television, hoping and praying that the launch would happen on this fourth attempt. On February 20, 1962, all systems worked as planned and Glenn’s rocket lifted away from Pad 14 at 9:47 AM Eastern time. In four hours and 56 minutes, Glenn orbited the earth three times before landing in the Atlantic Ocean 800 miles southeast of the Bahamas.

John Glenn became the first American to orbit the earth and claimed a place alongside the Wright Brothers and Charles Lindberg. President John Kennedy invited him to visit the White House, a New York City ticker tape parade was held in his honor, and Glenn toured the country promoting the space program. After repeatedly requesting another mission, and being told that he was too valuable a hero to risk on another flight, Glenn retired from NASA in 1964.

October 29, 1988 – Kennedy Space Center, Cape Canaveral, Florida: Thirty-six years after his Mercury flight, while chairing the President’s Council on Aging, 77-year-old Ohio Senator John Glenn finally got his chance to return to space. He served as a mission specialist aboard the space shuttle Discovery on a nine-day mission to the Space Station in which he participated in the launch of the Hubble Space Telescope orbital test platform.

Up until the age of 90, John Glenn flew his own plane, a twin engine Beechcraft, which he sold only after it became too difficult for Annie and him to climb into the cockpit. He died December 8, 2016, at age 95, and was buried at Arlington National Cemetery on April 6, 2017, his and Annie’s 74thwedding anniversary.

“Courage is being scared to death and saddling up anyway.”      John Wayne