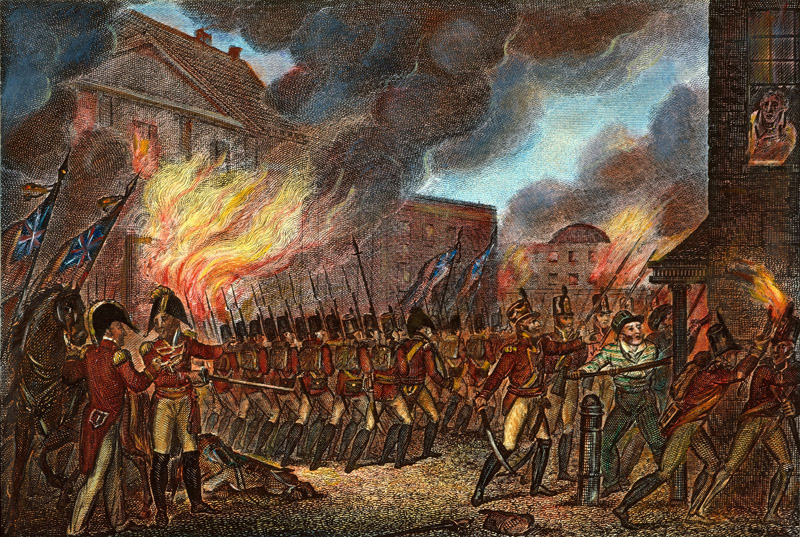 August 25, 1814 – Washington, D.C.: It was a most unusual weather phenomenon for the nation’s capital. Based on historical data, four decades later the National Weather Service described that day, “In the early afternoon, a strong tornado spawned by an approaching tropical cyclone from the southeast struck Washington county. Prolonged, torrential rains rolled over downtown Washington and high winds blew roofs off structures and uprooted trees.” A side note added, “The rains helped quench fires set by the British earlier that day.”

Just 30 years after the American Revolutionary War, England and America fought again in the War of 1812. The war was caused by British restrictions on U.S. maritime trade and America’s desire to expand its territory. The United States was taking on the greatest naval power in the world.

A week before the surprise hurricane, 16 British naval vessels landed at Benedict, Maryland, 50 miles southeast of Washington. Under the direction of Major General Robert Ross, more than 4,500 troops intent on burning the capital marched toward Washington. President James Madison and his cabinet fled the city.

The day before the storm, about 6,500 Patriot militia volunteers confronted the British forces on the road in Bladensburg, Maryland,10 miles north of Washington. The militia killed 65 redcoats and wounded 180, but they were no match for the British. The inexperienced volunteers were quickly scattered. As the army approached Washington, many of the 10,000 residents prayed for a miracle.

The following morning, British soldiers began torching the Capital, White House, congressional buildings and other key structures. Although the soldiers were accustomed to frequent light rain in England, they were unaccustomed to tornados and hurricanes and therefore they disregarded the darkening skies, lightning, thunder and strong winds.

As the hurricane swept in from the Atlantic, it spawned a tornado that ripped down Constitution Avenue toward the marauding British troops with high winds and sheets of rain. The storm lasted for hours, killing several residents and 30 redcoat soldiers.

A British officer described the storm, “Of the prodigious force of the wind, it is impossible for you to form any conception. Roofs of houses were torn off and whisked into the air like sheets of paper, while the rain was like a mighty torrential flood. The most appalling effect I had ever, or probably will ever witness.”

The flames doused the fires and sent the redcoats scurrying for cover. Before the storm even subsided, the British quickly withdrew from Washington as night approached. As a British officer retreated, he yelled to a local woman, “Great God, Madam! Is this the kind of storm to which you are accustomed in this infernal country? She responded, “No, sir, this is a special interposition of Providence to drive our enemies from our city.”

The British troops returned to their ships, several of which were severely damaged. The British occupation of Washington lasted but 26 hours. Thanks to the storm, they retreated to Bermuda.

President Madison returned to Washington two days later. The Capitol Building survived, but the Senate wing and White House were in ruins. Rebuilding began immediately. Four months later, the War of 1812 ultimately ended in a draw on the battlefield. A peace treaty was signed in December.

Did the storm stop the British rampage? Or were they finished with their mission? Was the storm a curse or blessing? Historians have long debated this event. The nation’s first Commander-in-Chief, George Washington’s perspective: “Who can look upon the events of the American Revolution without feeling the warmest gratitude towards the great Author of the Universe whose divine interposition was so frequently manifested on our behalf.”

After the war, President Madison called America to thanksgiving and prayer with a proclamation, “No people ought to feel greater obligations to celebrate the goodness of the Great Disposer of events than the people of the United States.” Madison quoted James 1:17 to remind Americans that if anything good happens to our nation it is from God who sends down every good and perfect gift needed for our care. Even hurricanes.