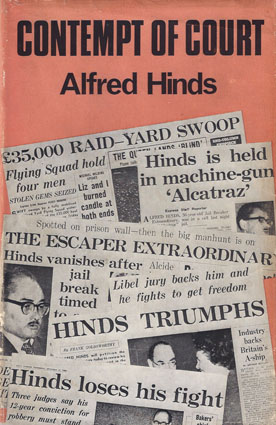 September 29, 1953 – Wandsworth Prison – London, England: Alfred Hinds sat in his cell, dejected and despondent. His two-day trial had been a farce. After not allowing five of Hinds’s key witnesses to testify, the judge sentenced him to 12 years in prison for armed robbery. Although Hinds had eight prior arrests, he was innocent this time.

Born in a suburb of London in 1917, seven-year-old Alfred Hinds was sent to an orphanage when both his parents went to prison for armed robbery. His father died in prison after a beating by the guards. After running away from the orphanage, Hinds lived on the streets and was frequently in trouble. He later joined the British Army but received a dishonorable discharge.

Hinds and three others were charged with robbing Maple Jewelry Store in London of cash and jewels worth $90,000. Hinds, by then a successful demolition contractor, was accused by one of the robbers as the fellow who blew the safe. Hinds had a handful of family and friends willing to testify that he was with them and not at the robbery.

Hinds hired a lawyer to appeal his case. He cited 16 errors in a 30-page summary about the injustices during the trial. Nine months later the appeal was rejected, and in February 1955, Hinds received a transfer to Nottingham Prison. He determined his only alternative was to escape and plead his case on the outside. On November 25, 1955, Hinds used two nine-foot wood-paneled doors he built in the carpenter shop to escape over a 20-foot fence.

Hinds fled to Dublin, Ireland. He used code to send a letter to his wife in London. At his request, she contacted three London newspapers all of which published the letter with reasons for his innocence. During the following eight months, Hinds sent additional letters to newspapers, however, in August 1956 authorities captured him in Dublin. Hinds was taken to Pentonville Prison in a London suburb.

At Pentonville, Hinds devoted his time to studying law books in the library. He discovered cases similar to his. Nixing a lawyer, in October and December he presented his case in two lower courts, but was found guilty and returned to Pentonville. In May 1956, Hinds appeared in person to appeal his case to the Court of Criminal Appeals in London, but the judge dismissed his case after one day and returned him to Pentonville.

Hinds concluded his best alternative was to escape again. On June 25, while pleading his case in the Law Courts in London, he locked two guards in the bathroom and slipped out of the courthouse – only to be arrested five hours later at a London airport. This time he was taken to the maximum-security prison at Chelmsford, England.

Another letter writing campaign followed, this time to the London Daily Mail newspaper. By now Houdini Hinds’ two escapes and frequent letters pleading his innocence had caused him to be somewhat of a celebrity with Londoners.

On Sunday morning June 1, 1958, Hinds successfully escaped from Chelmsford after having several keys made in the shop. Under the alias of William Bishop, he once again surfaced in Dublin, where he rented a one-bedroom apartment, frequently sent letters to newspapers, and landed a job as a car salesman. After 22-months he was identified, arrested and sent back to Chelmsford, only to begin another round of appeals.

In December 1960, Hinds, with an armload of law books, became the first prisoner to appear before the English House of Lords Appeals Committee. After pleading his case for four hours, he was turned down and transferred to the Parkhurst maximum-security prison on the Isle of Wight.

In November 1965, after 12 years in prison, three successful escapes, filing 17 total appeals, and countless letters to newspaper across the United Kingdom, justice was finally served. Forty-eight-year-old Alfred Hinds won a libel case against the policemen who arrested him and was exonerated of the crime.

After leaving prison, Alfred Hinds was a sought-after speaker and later became a member of the U.K. Mensa, the high IQ Society, for those with an IQ above 130.

“If you’re discouraged, don’t give up without a fight. Nothing worthwhile ever happens without endurance and energy.”                  Rick Warren