by peteblack4ua@gmail.com | Jul 12, 2021 | Beating the Odds, Courage, Determination Despite the Odds | 3 comments 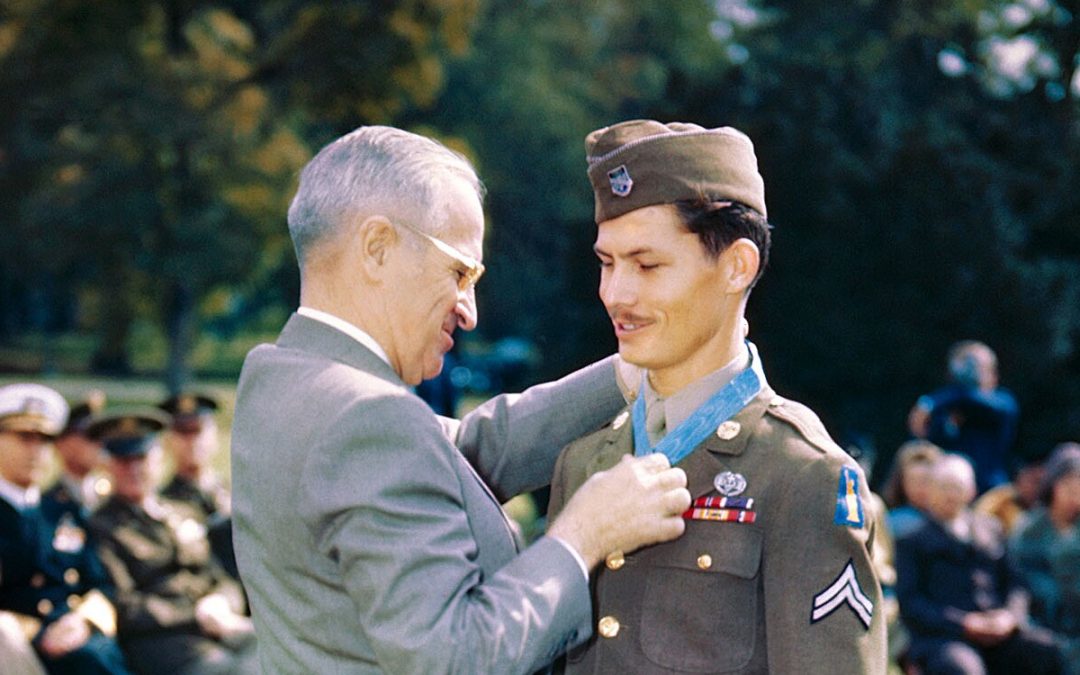 April 1943: Captain Jack Glover tried to have Desmond Doss discharged from his Army company. A Contentious Objector, Doss wasn’t like the other soldiers. He didn’t eat meat, refused to carry a rifle or work on Saturday, his Sabbath. And he prayed all the time. Fellow soldiers ragged Doss constantly and sarcastically nicknamed him Holy Joe.

Desmond Doss grew up a devout Seventh Day Adventist in Lynchburg, Virginia. His mother was the spiritual influence in his life, his father an alcoholic carpenter. Desmond once wrestled a gun from his drunken father who planned to use it on Desmond’s uncle. Afterwards, the teenager swore never to use a weapon.

With the advent of World War II, Desmond joined the Army. The Private First Class soldier became a medic in B Company in the 77th Infantry Division and shipped off to the South Pacific. Desmond went to war without a gun. He took only the pocket Bible his wife gave him and his faith.

The battle for Okinawa, a small island off the coast of Japan, began on April 21, 1945. The island was one of the last stepping-stones to the Japanese mainland. Japanese soldiers manned machine-gun posts and were hunkered down in caves. The Japanese stronghold was atop a 400-foot cliff U.S. soldiers referred to as Hacksaw Ridge. Taking the ridge was critical to the taking the island.

On April 29, after several failed attempts to take the ridge, B Company made another attempt. Soldiers used wooden ladders and cargo nets to scale the cliff. Then they had to work their way through booby traps while under heavy machine gunfire. It was bloody – more than half the soldiers in B Company were wounded on the ridge.

For 12 hours, 5’8” and 145 pound Desmond Doss ran into enemy fire to rescue his wounded comrades. One at a time, he carried them to the cliff and lowered them to safety in a basket. One soldier was rescued only 25 yards from a Japanese machine-gun bunker. After rescuing each soldier, Desmond prayed, “Lord, help me to rescue another one.”

Desmond Doss rescued 75 men that day. None died. Later, when a reporter asked how Desmond saved that many men without getting shot, and how no one died that day, a soldier responded, “Doss prayed.”

The grisly battle wore on and the night of May 21, grenade shrapnel hit Desmond in his hip and leg. He treated himself and planned to rescue more wounded until his commanding officer ordered him to the rear for medical attention. While Desmond was waiting to be transported, a shot from a Japanese sniper shattered his arm from the elbow to the wrist.

Aboard the hospital ship USS Mercy, doctors splinted Desmond’s arm and removed 27 pieces of shrapnel from his hips and legs. A few days later, when Desmond realized he had lost his Bible, his fellow soldiers found it and returned it to him. On June 12, after 52 days, the Allied forces finally captured Hacksaw Ridge and the island of Okinawa.

The battle for Okinawa was the bloodiest and last WWII battle in the Pacific. More than 12,000 Americans died on the island and 49,000 were wounded. More than 110,000 Japanese died defending Okinawa.

For his bravery, Corporal Desmond Doss received two Bronze Stars and three Purple Hearts. On October 12, 1945, in a ceremony at the White House, President Harry Truman presented Desmond the Congressional Medal of Honor, the military’s highest honor. More than 42 million Americans have served in the military during wartime. Only 3,500 have received the Medal of Honor including just three conscientious objectors.

After the war, Desmond spent six years in and out of hospitals being treated for war wounds and tuberculosis, which he contracted on Okinawa. Despite his injuries, he worked and raised a family on a small farm in north Georgia. In 2006, Desmond Doss died at his home in Piedmont, Alabama, at age 87 and is buried in the National Cemetery in Chattanooga, Tennessee.

“Desmond was not one to give up. He didn’t know how.” Harold Doss, brother