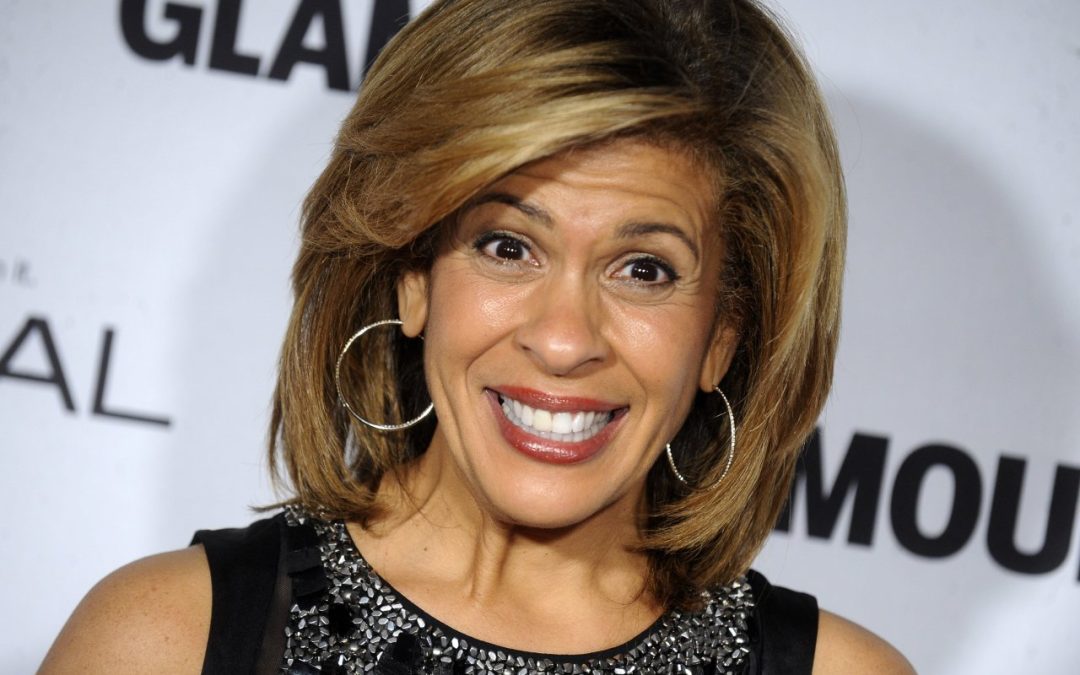 “Say your dreams out loud. If you want something bad enough, say it out loud, even if you whisper it in the bathroom mirror. Dreams have a way of coming true.”  Hoda Kotb

May 1986 – Morgantown, West Virginia: Hoda had her Virginia Tech journalism degree, her VHS videotape promo and a job opportunity in Richmond. She was going to be a television news anchor. Confident she would land the job, she borrowed her mother’s car and only packed one suit, her favorite green one. She showed up 30 minutes early for the interview.

The news director put Hoda’s tape in the player for a couple of minutes before ejecting it. “Hoda, I’m sorry, but you are not ready for the job.” Hoda got up to leave. “But I have a buddy in Roanoke who is looking for someone like you. I’ll call him.” Hoda drove to Roanoke and arrived at the station early the next day.

After quickly watching Hoda’s tape, the Roanoke station manager shook his head, “Hoda, honey, you are not what we are looking for. You’re not ready for Roanoke. But I know a guy in Memphis who will hire you.”

Memphis sounded like a nice TV market. Hoda ironed her green suit and drove 650 miles to west Tennessee. When she arrived, the news director informed her that he only had five minutes for her interview. Hoda was familiar with the drill. A quick peek at her tape and, “I’m sorry you are not what we are looking for, but good luck.” Followed by an escort to the door.

Hoda borrowed her mother’s car for 10 days while she drove all over the southeast looking for her first job. She interviewed in the Carolinas, Georgia, Alabama, the Florida Panhandle and Mississippi. Some nights she slept in her car. After being rejected by 27 TV stations, Hoda called her mother from Mississippi, “Mama, I don’t think I’m cut out to be a TV reporter. I’m coming home. I’m going to get a job in public relations. It pays more anyway.”

Hoda was driving home through the rural Mississippi delta when she saw the billboard. “Greenville, Mississippi, our eye is on you. CBS.” She stopped and went in. CBS affiliate WXVT news director Stan Sandroni played her tape. Hoda watched him while he watched all 30 minutes. Then he said words she would never forget, “Hoda, I like what I see!” She burst into tears.

Hoda Kotb began as a news story writer at little WXVT TV. A few months later, Sandroni rushed into the station offices and asked, “Who has a blazer, a coat?” Hoda raised her hand. “OK, Hoda, Ann Martin is sick. You will anchor the 6:00 news tonight.” She was a natural. After two years in Greenville, Hoda moved to ABC affiliate WQAD in Moline, Illinois, and worked there in 1988-89. Then it was on to CBS WINK in Fort Meyers, Florida, for two years before joining CBS affiliate WWL in New Orleans from 1992 to 1998.

Hoda got her big break in April 1998, when she joined NBC News in New York as a correspondent for Dateline NBC and all NBC news platforms. After a decade, she moved to NBC’s morning show and remains a co-anchor of the popular Today Show. She also headlines Today’s fourth hour segment, Today with Hoda and Jenna, which she hosts with Jenna Bush Hager, daughter of President George W. Bush.
Hoda has won every award available to broadcast journalists, including a Daytime Emmy, Peabody Award, Gracie Award and the prestigious Edward R. Murrow journalism award. She is the author of six books, including her bestselling autobiography Hoda: How I Survived War Zones, Bad Hair, Cancer and Kathie Lee. She is a breast cancer survivor.

“It only takes one person to change your life,” Hoda says. “Stan Sandroni was that person for me. He helped make all my professional dreams come true. Without him, I would have probably worked a career in public relations. He made me feel like I was Walter Cronkite. Stan was like B12 shots for my soul.” The 22-year-old journalism major who received 27 rejections before landing her first job is one of the most recognizable personalities in American broadcast journalism.