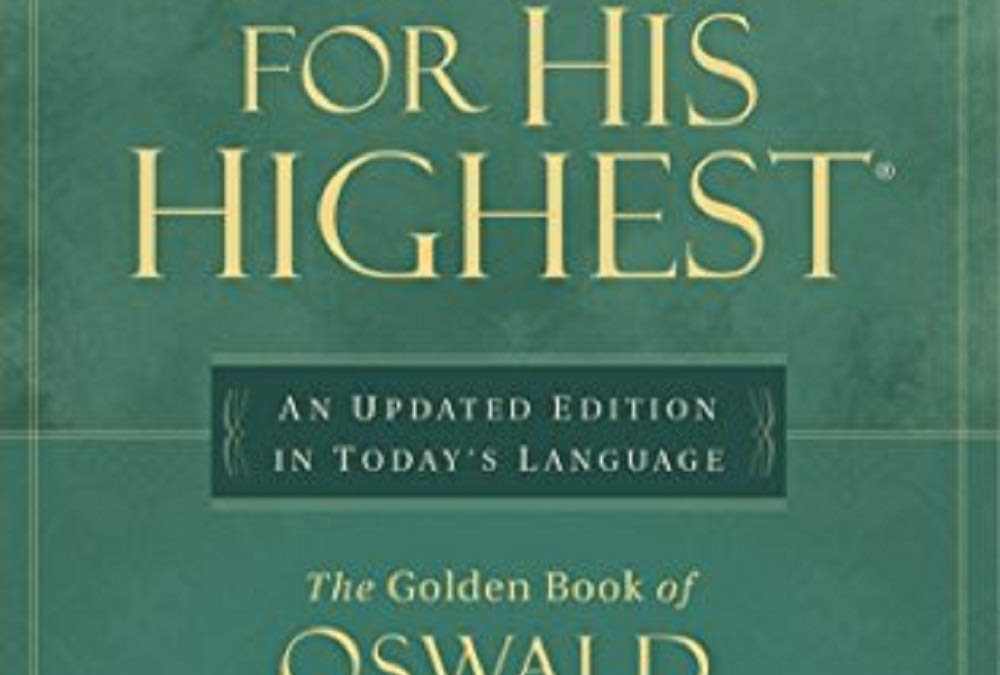 “For each of us, there is only one thing necessary: to fulfill our own destiny, according to God’s will, to be what God wants us to be.”       Thomas Merton

November 16, 1917 – Cairo, Egypt: The funeral possession slowly crossed the Nile River to a British military cemetery south of town. There, 43-year-old Reverend Oswald Chambers, a YMCA chaplain, was buried with full military honors. Today, save for the shorthand notes of his beloved wife, Biddy, he would be long forgotten.

Oswald Chambers was born in 1874 in Aberdeen, Scotland, the son of an evangelist. After dropping out of the University of Edinburgh Royal College of Art, he graduated from Dunoon College, a small theological training school. Chambers migrated to London, where he became a preacher.

Born in 1884, Gertrude Hobbs grew up in London. After taking a stenography and typing course through Pittman’s Correspondence School, she began work for an attorney. Gertrude hoped to be the first female secretary to the British prime minister. Brilliant in shorthand, she could take notes at 250 words per minute, faster than most people talk.

In 1908, Oswald, 35, met Gertrude Hobbs, 24, at the church his brother Arthur pastored in London. After a two-year courtship, they married. Oswald referred to Gertrude as his “beloved disciple,” which became B.D. and later, affectionately “Biddy.” Oswald taught and preached while Biddy took shorthand at every venue. It was her way of listening.

In 1911 Oswald and Biddy started a small Bible college with 25 live-in students. Oswald lectured and taught Bible classes with Biddy by his side, taking notes. It was a great partnership. Their only child, Kathleen, was born at the school in 1913.

With the outbreak of World War I, the Bible college came to an end. Oswald volunteered to be a chaplain at a YMCA Quonset hut at a British army base at Zeitoun, Egypt, a few miles from Cairo. Oswald and Biddy fed hungry battle-worn soldiers during the day and Oswald taught Bible classes to as many as 700 soldiers at night. Biddy was always there with her notebook taking down in shorthand the words her husband spoke.

In November 1917, after two years in Cairo, Oswald developed complications following surgery for a ruptured appendix and died. A few weeks after Oswald’s death, a co-worker suggested to Biddy, “Wouldn’t it be a fine thing to print one of Oswald’s sermons and give it to the 700 soldiers for Christmas?” Biddy agreed. She transcribed a sermon “The Place of Help” and gave it to the soldiers.

The response to the sermon was so overwhelming that Biddy printed another one and then another. Soon the YMCA asked if they could handle the task. Each month they sent 10,000 copies of sermons to British soldiers in YMCA huts in every theater of the war.

Biddy and Kathleen remained in Cairo until June 1919, when the last soldier left. Then the 34-year-old widow returned to England with a 5-year-old daughter and several trunks of her voluminous notes, confident that her calling was sharing her husband’s words with the world. She took to her typewriter and produced lectures and sermons. At the same time, she supported herself by running a boarding house for four college students in Oxford.

Biddy began to work on compiling a collection of carefully chosen paragraphs into daily readings gleaned from Oswald’s talks. It was a challenging editing project. She created 366 readings, one for each day of the year. In 1927, 10 years after Oswald’s death, Biddy published My Utmost for His Highest. The title for the book was one of Oswald’s favorite expressions. Almost 100 years after it was published, My Utmost remains the world’s best-selling devotion with more than 13 million copies sold. It has been translated into 45 languages.

By the time she died in 1966 at age 82, Biddy Chambers had compiled 30 books, always with Oswald’s name on the cover and a short note inside the book’s cover stating, “Compiled by Biddy Chambers.” The God-inspired words came from Oswald, but the books and her husband’s fame rested on Biddy’s extraordinary stenographer skills and her sensitivity to God’s leading. She had given her utmost for God’s highest.