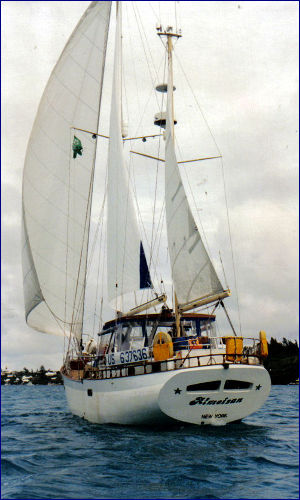 Monday, May 2, 2005 – Bridgeport, Connecticut: It was supposed to be an uneventful six-day sailing adventure to Bermuda on the 45-foot sailboat Almeisan. First mate Lochlin Reidy, age 58, had made 16 crossings with Captain Tom Tighe. The captain had made the 600-mile trip 48 times. This one, at age 65, was going to be his last. Also on board were three paying crewmembers, none of who had sailing experience.

When the Almeisan left port, Tighe was aware of a low-pressure system that was forecasted to develop off the Georgia coast later in the week. He planned to sail east of the system and did not anticipate a problem. However, by Friday morning, the crew was encountering 30-knot winds and 10-foot waves. It was too late to turn back. They couldn’t outrun the storm. They had no choice but to sail through a rapidly strengthening low-pressure area off the North Carolina coast.

By Saturday afternoon, the Almeisan had dropped the sail and was trying to motor through 20-foot seas as the storm intensified. At 3 a.m. Sunday morning a 30-foot wave swamped the boat. With the boat damaged and taking on water, Tighe radioed the Coast Guard that they were abandoning the vessel. He turned on the emergency location beacon. Tighe and Reidy were deploying the lifeboat when a large wave knocked them both overboard. The other three crewmembers were left on the disabled boat.

Miraculously, the two men found each other in the dark in the huge waves and tied their life jackets together with a short rope. They were in 70-degree water and knew that if the storm did not drown them, hypothermia would probably kill them in 12 hours. The relentless waves often dunked them below the surface. Tighe saw the situation as hopeless. Reidy begged him to not give up. He promised the captain that he would get him home, but on Sunday afternoon Tighe died from hypothermia.

Committed to his promise, Reidy kept Tighe’s body tethered to him. He had been in the water 16 hours and wasn’t sure how much longer he could hang on. His eyes were raw and his lips and tongue were severely swollen from the salt water. Reidy tried to focus on the positive – at least the storm was keeping the sharks below the surface.

On Sunday at 5 p.m., Reidy saw a Coast Guard C-130 plane drop out of the clouds. His hope was buoyed. The Coast Guard was searching for him, but then the plane was gone. As darkness fell, so did his hope. His teeth chattered, and his hands and feet were numb. Reidy wondered how he could he possibly make it through the night? Finding a person in the Atlantic Ocean at night was virtually impossible.

Reidy convinced himself that if he could survive the night, the Coast Guard would find him at daylight. It was a speck of hope, but it was all he had. Occasionally, he removed a small strobe light from his lifejacket pocket and turned it on for 30-minute intervals. Shortly after midnight, the C-130 was back. A spotter thought he saw a faint strobe light in the dark ocean below, but because of the heavy rain he could not be sure. The plane dropped flares to mark the spot and radioed the Sakura Express, an oil tanker that happened to be in the area, to help with the search.

The tanker located the flares and after several minutes of shining a searchlight, got a brief glimpse of Reidy’s orange life vest. As the ship rolled in 30-foot seas, the crew performed a dramatic rescue. They lowered a cargo net and after several tries, Reidy was able to drag himself and the captain’s stiff body into the net.

Against impossible odds, Lochlin Reidy’s promise to his friend, Tom Tighe had kept him hanging on when the situation seemed hopeless. He kept his promise. They were going home. On Sunday morning a Coast Guard helicopter rescued the three crewmembers from the half-submerged Almeisan, and Reidy accompanied Tighe’s body back to his family in Putnam Lake, New York.