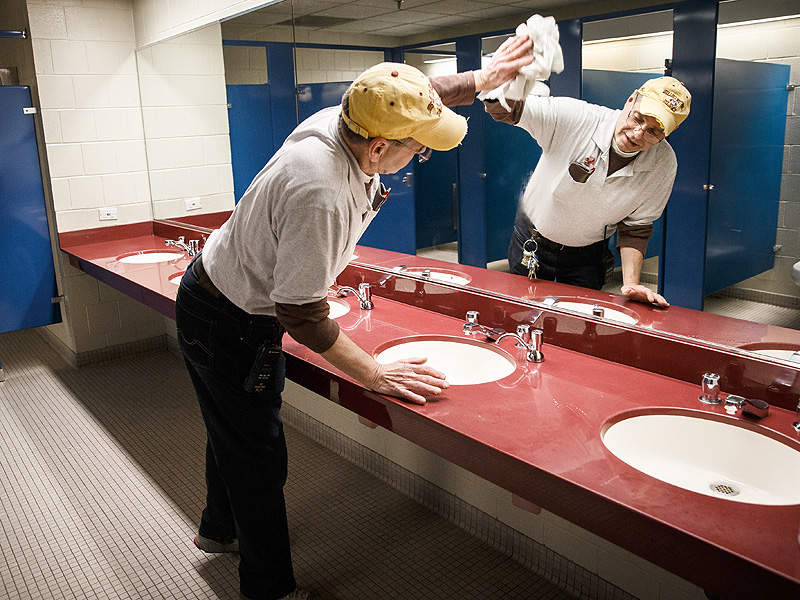 It is 3:00 AM and the Robsham Theater Arts Center on the Boston College campus is quiet and deserted. Fred, the graveyard shift janitor, pushes his yellow cart from room to room carrying his mop, broom, and cleaning supplies. His job is monotonous and not real challenging, but it provides Fred with the means to create a better life for his five children. Although the job would be demeaning to many people, for the past fifteen years Fred has been happy to have steady work with good benefits and his job is less physically demanding than his previous job as a cafeteria cook at Boston College.

Fred Vautour was born in 1954 in Waltham, Massachusetts, about twelve miles from Boston. His family did not have the money to send him to college and he wasn’t interested in school anyway. At age 14, Vautour started washing dishes part-time at Ritcey’s Seafood Kitchen in Waltham. At 16 he was promoted to a full time cook position and later became the restaurant manager. He stayed at the restaurant for 27 years, until 1994 when he landed a job cooking at Corcoran Commons, a huge student cafeteria at Boston College. It was the first job he ever had that paid benefits like vacation and medical.

There was another benefit that Vautour discovered a few months after beginning work at Boston College – children of employees could attend the university tuition-free, as long as they met the entrance qualifications. With a required minimum ACT score of 30 or a 1300 SAT score, only 30% of those who apply are admitted to the prestigious Jesuit Catholic Research University.

In 1998 Vautour’s oldest daughter Amy applied and was accepted at BC. Vautour was coaching one of his son’s baseball teams when Amy arrived at the field with a bunch of maroon and gold balloons to share the happy news with her father. He proudly framed the letter and hung it on the wall at his house. With scholarship money, Amy’s annual cost to attend BC was reduced from $65,000 a year to $3,000 a year. She graduated in 1992.

Cooking for 2,300 students was tough, demanding work, particularly as Vautour got older. When Amy was a junior, he applied for and became the night shift janitor at the Robsham Theater Arts Center, a complex that included a 570-seat theater, classrooms, and a dance studio. Since that time, Vautour has meticulously cleaned the facility and encouraged his other four children to set their sights on Boston College. Oldest son John was next to be accepted and graduate followed by Michael, and then Thomas.

In May 2016, Vautour’s youngest child, Alicia, earned her nursing degree from Boston College becoming the fifth child to earn a degree there. Before Alicia was presented with her diploma, 62-year old Fred Vautour was called to the stage and given the honor of presenting Alicia with her diploma. It was an emotional day for Vautour who has had a child at BC for 18 consecutive years. As each child graduated, Vautour became prouder and more excited. He and wife Debra created a BC hall of fame room in their house with each child’s college acceptance letter and diploma proudly displayed.

All five kids lived on campus and often stopped by and visited with their dad as he cleaned Robsham Hall. Michael, now a mortgage writer at Wells Fargo, remembers bringing some friends by one night to meet his dad. He told them, “Meet my dad who works graveyard shift and sacrifices so I can afford to go here.” The friend was so moved that he hugged Vautour’s neck.

With Amy’s graduation behind him, Vautour continues with his work at the Robsham Center scrubbing floors, vacuuming, emptying trash and polishing the mirrors, proud of his job and the five college degrees his graveyard shift job helped provide. Vautour plans to keep his job at BC. He says, “I love my job, being on a college campus keeps me young.”