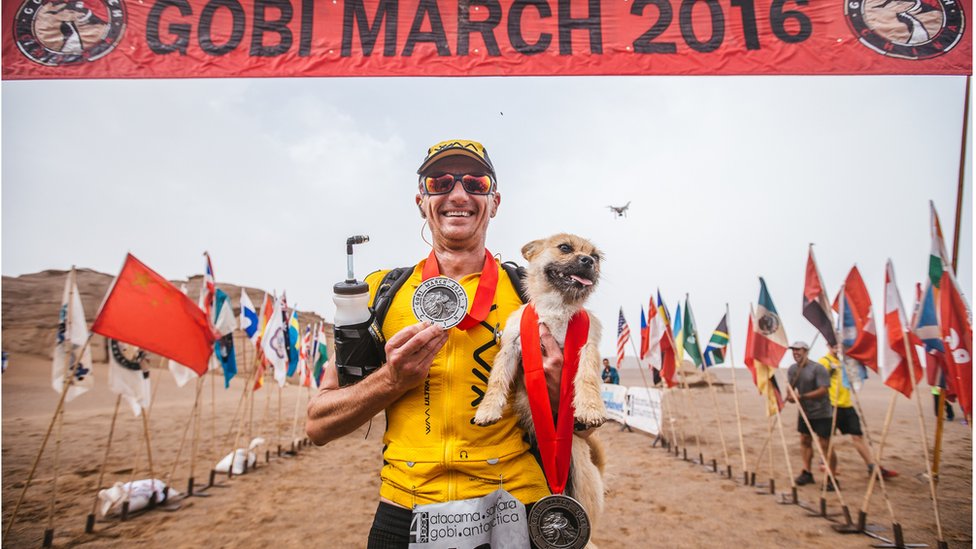 The heart has its reasons which reason knows nothing about.”    Blaise Pascal

June 20, 2016 – Gobi Desert – China: Dion Leonard stood at the starting line on the second day of the Six-Day 155-mile Gobi Desert Run. A scruffy little brown dog materialized at his feet. Concerned he would trip over the dog, he tried several times to shoo it away. But when the race began, the dog was still there and ran along side of him.

Several more attempts to lose the dog were unsuccessful. She ran the entire 23 miles through the mountains that day with Leonard, and that night she shared his sleeping bag and adopted him.

Leonard named the dog “Gobi.” The little mixed breed mutt ran step for step with him all 26 miles of day three. Because of the rugged terrain and extreme temperatures on days four and five, race officials agreed to drive Gobi to the finish line where she waited patiently for Leonard. Gobi ran with Leonard on the final day and when he received his second place medal in the field of 100 ultra runners, Gobi, the race mascot, got one, too.

The following day, as runners boarded buses to Urumqi, China, the departure point for home, Gobi stood staring up at Leonard with big brown eyes and a wagging tail. Leonard hesitated. “Ok, little buddy, let’s go. We will figure it out later,” he muttered as he picked her up. From Urumqi, he phoned his wife at their home in Edinburg, Scotland, prepared with his rationale for bringing a stray dog home. No worry. She had been following the story on Facebook and her first words were, “Are you bringing Gobi with you?”

Leonard left Gobi with race officials in Urumqi and returned to Edinburg to make arrangements to bring the dog back. The complicated process surprised him. World Pet Care informed Leonard that Beijing officials must approve the paperwork, then a veterinarian would check for rabies and other diseases. Afterwards, the dog would be quarantined four months in China before she could leave the country.

The Leonard’s created a computer website to help with the estimated $6,500 costs and raised the amount in less than 24 hours. Within a week, 14 million people had seen Gobi’s story on social media and newspapers around the world were asking for interviews.

Then Leonard got a call from Urumqi saying Gobi had run off and hadn’t been seen for 10 days. Heartbroken, he left immediately on the 30-hour trip to China to look for his dog. He posted a $1,500 reward and spent the next week with a small group of volunteers putting up lost dog posters in the city of three million people.

The efforts seemed fruitless and Leonard was losing hope when he received a picture on Facebook of an injured dog curled up on the side of a road. Despite a serious cut on her head and a broken right hip, Gobi squealed and jumped into Leonard’s arms when she saw him.

Leonard was happy to be united with Gobi, but he no longer trusted race officials to keep his dog. He was missing his wife, out of vacation and in a dilemma, but he felt that he needed to honor his commitment to Gobi. With the support of his wife and encouragement of his boss, Leonard took a four-month leave of absence and rented a small, shabby apartment in Beijing to care for his dog during the quarantine period.

On New Year’s Eve 2016, six months after Gobi singled him out of 100 runners, Dion Leonard and his dog boarded a flight in Beijing to return to Scotland. They arrived to find a huge crowd of family and friends gathered to celebrate their arrival.

“I don’t know why Gobi chose me,” Leonard told the BBC, “But I made a promise that I would bring her back to the UK. We battled through ups and downs and I am glad that we got through it.” In the future, Leonard plans to run the 155-mile Atamara Desert Run in Chile. He jokes, “I’m hoping a llama or alpaca doesn’t follow me. I may not get away with bringing that back.”