by peteblack4ua@gmail.com | May 29, 2018 | Adversity, Chasing Your Dream, Getting Fired, Uncategorized | 1 comment 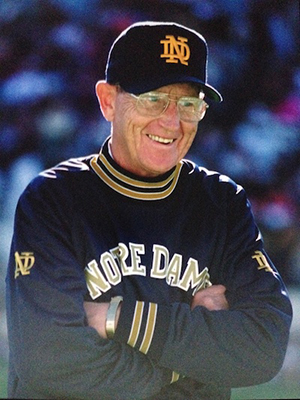 Sunday, December 18, 1983 – Fayetteville, Arkansas: Arkansas Head Football Coach Lou Holtz had just returned from church when Athletic Director Franks Broyles called and asked him to come by his office. When Holtz arrived, Broyles got right to the point, “Lou, I want you to resign.” Holtz thought he was joking, but Broyles was dead serious. “Why?” Holtz asked. “I just think it is best for the program,” Broyles replied. The news hit Holtz like a brick.

Holtz and his wife Beth had hoped that Arkansas would be their last stop and they talked about retiring in Fayetteville. He had the best won-loss record (60-21) in University of Arkansas history, had the second best won-loss record ever in the Southwest Conference, and during his tenure Arkansas had received seven consecutive postseason bowl invitations. Holtz didn’t think that he deserved to be fired. He was angry and hurt.

The following day Harvey Mackey, a successful businessman, New York Timesbest-selling author, and personal friend gave Holtz a call. Mackey, who was a University of Minnesota alumnus, was helping the athletic director fill the head coach position. He wanted Holtz to come to Minnesota. As far as Holtz was concerned, Minneapolis was the North Pole. Beth encouraged him to stay positive instead of moping around and feeling bitter, so he followed her advice and packed for a trip to Minnesota.

It was snowing during the drive to the airport to catch their flight and Holtz threatened to go back home. “No,” Beth advised, “We’re more than halfway to the airport and the snow is easing up. Plus, there’s nothing waiting for us back in Fayetteville.” Despite zero temperatures and lots of snow on the ground, Holtz liked the people and the program at Minnesota.

When he and Beth prayed about the decision in their hotel room, Holtz had a sense of peace about the offer and he got an idea. He asked the University of Minnesota for a Notre Dame clause – if in the future Notre Dame offered Holtz a job, and if Minnesota were bowl eligible, he could terminate his contract and accept the position. Holtz, a devout Catholic, had grown up in Ohio with a dream to coach football at Notre Dame. In high school, the sisters of Notre Dame taught him and he marched to the Notre Dame fight song at recess, lunch, and at afternoon dismissal.

The Minnesota athletic director initially balked at Holtz’s request. But Holtz was the fifth coach offered the job and after two days the AD agreed to the clause. In 1984, Holtz became the head coach at the University of Minnesota and won four games. The following season his team went 6-5 and was invited to the Independence Bowl in Shreveport, Louisiana. Holtz got a call a week after the bowl that began, “Lou Holtz, this is Father Joyce from Notre Dame…”

According to Holtz, “Things are not always going to go the way you would like them to go and it is important to maintain a good attitude and don’t ever lose sight of your dreams. If I had been able to see the future and known what would happen five years later,” Holtz smiles, “I might have hugged Frank Broyles neck when he asked for my resignation. You never know when bad things are intended to lead you in a good direction.”