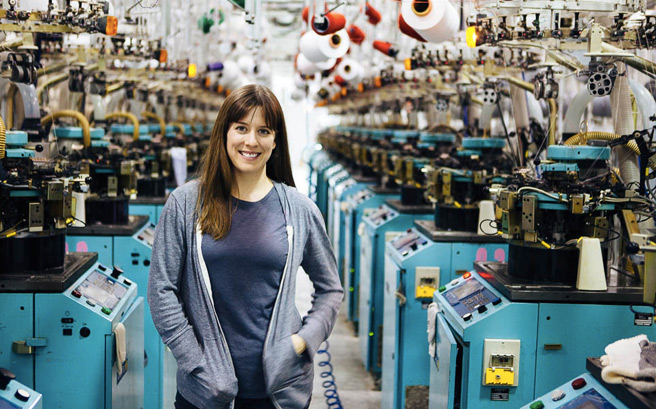 In early 2008, Terry and Regina Locklear sat in the office at their sock mill, Emi-G Knitting, in Ft. Payne, Alabama, wondering what the future held for them. The mill was quiet, and except for a few key employees, all the workers were laid off. On the days the plant operated, it had only been running at 30% capacity and this did not come close to paying the bills. Terry’s brain suggested he turn out the lights and go home, like so many sock mill owners in town had done, but his stubborn heart told him to hang on. He knew if he closed the doors, he would never re-open the plant.

For decades the green sign on the road into town had declared, “Welcome to Ft. Payne – The Official Sock Capital of the World.” In 1907, the W.B. Davis Company opened the first sock mill in Ft. Payne and for the next century sock making was king in the northeast Alabama town of 14,000. By 1994, when the North American Free Trade Agreement was passed, there were over 125 sock mills employing almost 8,000 people. But in the late 1990’s and early 2000’s things began to change for Ft. Payne as cheaper imported socks hit the American market. The mill closures were rapid and devastating.

Growing up in Ft. Payne, Terry Locklear, like most of the town, had family and friends who worked in the mills, and he dreamed of having his own sock mill like his brother. In 1991, Terry left his job as the General Manager of a Chrysler dealership, took a leap of faith, and with borrowed money started his own mill. He named it Emi-G Knitting after his two young daughters Emily and Gina. Terry and Regina worked long hours for years to build their business. By 2005, annual sales totaled almost $3 million. Russell Mills in Alex City, Alabama, was their anchor customer and white athletic socks were their bread and butter.

On a difficult day in 2008, when Terry and Regina were worrying about the business, 26-year old Gina, having had an epiphany, popped in the office from her real estate job in Birmingham. She had decided to quit her job and join the family business. Passionate about organic and green living, Gina excitedly suggested they introduce a fashion sock made from organic cotton and dyes. Terry, whose paradigm was white athletic socks sold in bulk to big box retailers, wasn’t buying. He was deeply concerned about Gina joining a business whose future was in the past. He also thought the new product might require new sock machines at a time when there was little money for investing.

Gina persisted, and her enthusiasm ultimately moved Terry to commit a small budget for product development. Gina sought the help of Billy Reid, one of Alabama’s leading men’s clothing designers. After considerable research and product development, Gina challenged Emi-G mill manager Vance Veal to tackle what seemed impossible at Emi-G – produce a six-color, multiple-pattern sock. After a plethora of trials and the purchase of a few new state of the art Italian sock machines, Gina’s new product was born.

Late in 2008, Gina introduced the Zkano line of six-color fashion socks for women made from organic cotton grown in Lubbock, Texas, and dyed yarns sourced from North Carolina. The socks, aimed at 15 to 35 year olds, featured trendy stripes, polka dots, and colors. Emi-G followed the women’s sock success with the introduction of men’s fashion socks. In 2013, Emi-G introduced another line, Little River Mill Socks, named after the Little River that flows near the factory. The two popular sock brands can be purchased online directly from Emi-G or found in over 200 stores from Alabama to New York, and from Maine to California. Socks sell for $15 to $30 a pair.

Gina had been twelve when Terry started his sock mill and in the afternoons after school, she had doodled colorful sock designs in a 3-ring notebook and helped in the mill by sorting socks. Twenty-five years later she designs the socks and Vance Veal figures out how to configure the machines to produce her designs. In 2015, Martha Stewart Living presented Emi-G with their American Made Award, which recognizes entrepreneurs who make distinctive, innovative American products. Gina’s story has been featured in the Wall Street Journal, the New York Times and she has appeared on the NBC’s Today Show.

Today the sock capital of the world sign is gone. There are less than ten small sock mills operating in a town that once produced 600 million dozen pairs of socks annually – one in every eight pairs in the world. In the shadow of Little River Canyon, the 20,000 square foot Emi-G factory sock knitting machines are humming. Gina Locklear refused to accept the inevitable and saved the business that her parents worked so hard to build.

“We shall draw from the heart of suffering itself the means of inspiration and survival. Sure I am of this that you have only to endure to conquer.”         Winston Churchill