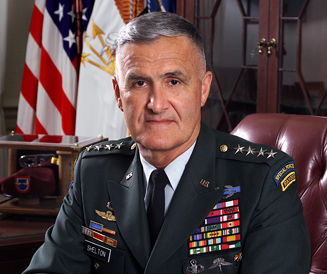 March 23, 2002 – Innova Fairfax Hospital – Falls Church, Virginia: After reading the MRI, the doctor turned to former Army Four-Star General Hugh Shelton and grimly commented, “General, I am going to put it to you straight. You are never going to walk again. You may eventually regain use of your hands, but we can’t even guarantee that.” Shelton responded, “Your name isn’t God, is it? We will see about that.”

Hugh Shelton was born in Speed, North Carolina in 1942. He attended North Carolina State University, participated in Army ROTC, and earned a degree in Textile Engineering. After graduation, Shelton was commissioned as an Army 2nd Lieutenant. He served two tours of duty in Vietnam with the 5th Special Forces group and later held senior command positions during the Gulf War.

In October 1997, Shelton became Chairman of the Joint Chiefs of Staff, the highest-ranking military officer in the U.S. Armed Forces. He served for four years as the primary military advisor to the President and Secretary of Defense. His leadership was critical during the 9/11 terrorists attack on America.

The 66-year-old’s Saturday morning work list included trimming an oak tree in the back yard. When he cut through a three-inch limb, it clipped his stepladder. Shelton fell five feet and landed on the back of his head. The fall paralyzed him immediately. As he lay there, Shelton, a former paratrooper with more than 450 jumps, wondered how he would explain this incident to his wife, Carolyn, who was inside enjoying her morning coffee.

After almost an hour, a neighbor heard Shelton’s cries for help. Paramedics rushed him to Inova Fairfax Hospital where he received the grim diagnosis. That afternoon, because of his senior military status, Shelton was flown to the Walter Reed Army Hospital trauma center in Bethesda, Maryland. A team of neurosurgeons had both good news – his spinal cord was not severed, and bad news – the injury would likely leave him a quadriplegic.

The neurosurgery team suggested to General Shelton that he consider a radical, but risky, new procedure for treating spinal cord injuries. It involved raising his blood pressure to astronomical levels. If successful, it would force blood to the damaged tissue, possibly helping it to heal. The risk was the possibility of a massive stroke or fatal heart attack during the procedure. Shelton contemplated the choice for thirty seconds. He turned to Carolyn and told her, “The game favors the bold; let’s do it.” She calmly responded, “I knew that you would say that.”

Shelton survived the procedure. Physical therapy began immediately with a goal of getting the General to wiggle a little toe. Try as he might, there was no feeling and no movement. Carolyn encouraged him, “Hugh, you can do it. If anybody can, you can.” In late May, two months after the injury, doctors removed pieces of four cervical vertebrae that had been compressed in the fall and rebuilt them with titanium rods and screws. By then Shelton could wiggle his toes and fingers.

On June 13, 2002, eighty-three days after General Shelton arrived at Walter Reed, he walked out of the hospital. His remarkable recovery was a result of top-notch medical care and his fierce determination to overcome the paralysis. His humor and eternal optimism were a catalyst for his recovery and an inspiration to those who took care of him.

Today, at age 75, General Shelton leads a full and active life. In October 2010, he published his autobiography, Without Hesitation: The Odyssey of an American Warrior. He devotes time to the General Hugh Shelton Leadership Center at North Carolina State University and is a frequent speaker at corporate meetings and leadership events across the country.