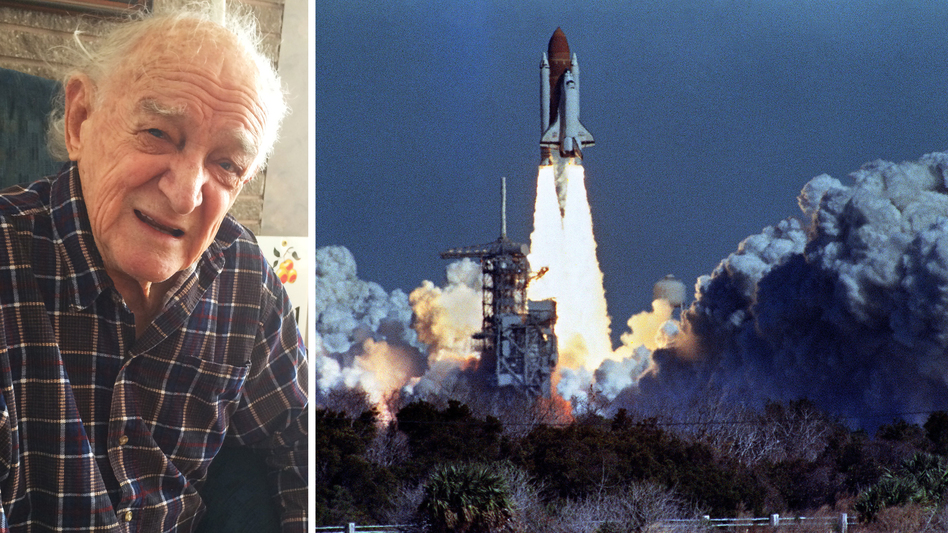 Ebeling knew what those at NASA did not know. The rubber O-rings used to seal the joints on the space shuttle fuel lines stiffened in cold weather. A strong cold front in Florida was going to subject the O-rings to 30-degree temperatures. Ebeling was gravely concerned about a fuel leak and a shuttle explosion.

Ebeling’s call to McDonald triggered six hours of conference calls between Thiokol engineers and NASA executives at the space center. The engineers begged for a delay of the next day’s launch. NASA overruled them. The launch had already been delayed once.

Bob Ebeling had grown up in San Diego. After high school, he joined the Army and served as an infantryman in the Philippines during WWII. Later, Ebeling got married, fathered four daughters and earned a mechanical engineering degree from California Polytechnic State University in 1952. He began his career as an engineer with Convair, a San Diego manufacturer of rockets. A decade later, Ebeling joined Morton Thiokol a builder of rocket propulsion systems.

By the 1980s, Ebeling was manager of the ignition systems and final assembly for the shuttle rocket boosters. On that cold January 1986 afternoon, Ebeling drove home furious. His wife Darlene had never seen him so upset. He was inconsolable. “The Challenger is going to blow up,” he cried. “Everyone’s going to die!”

The next morning, Ebeling watched the launch on a big screen at the Brigham City office with Roger Boisjoly, Thiokol’s chief seals expert. They prayed and held hands. When the shuttle cleared the launch pad safely, Biosjoly breathed a sigh of relief and turned to Ebeling, “Well, we just dodged a bullet.”

Less than a minute later, at 11:39 a.m. EDT, 73 seconds after liftoff, the space shuttle erupted in a fireball killing all seven astronauts on board. Ebeling walked to his office and cried.

Bob Ebeling felt guilty for his failure to stop the launch. He wondered if there was more he could have done to prevent the tragedy or if another engineer might have convinced NASA to postpone. He believed God had made a mistake by picking him to be on the team. Ebeling started having severe headaches and nightmares.

A few months after the shuttle explosion, 59-year-old Bob Ebeling resigned from his job at Thiokol. He could not risk the possibility of another disaster at NASA. For 22 years he managed the Bear River Migratory Bird refuge near his house in Brigham City. Dealing with ducks and swans was far better than the daily reminder of what happened at NASA. In 2013, Ebeling was named National Wildlife Refuge Systems volunteer of the year.

In January 2016, on the 30th anniversary of the Challenger explosion, the 89-year-old engineer who was dying of bladder cancer agreed to speak to National Public Radio (NPR) about the incident. He was finally making his guilt public. He told NPR that God should not have picked him for the job. He was a loser. NPR received hundreds of emails, letters and phone calls from listeners wanting to let Ebeling know that the disaster wasn’t his fault. They urged him to forgive himself. Ebeling’s daughter in Brigham City read him the letters.

Perhaps the most significant impact came from Ebeling’s old boss, Allan McDonald. He told Ebeling, “My definition of a loser is somebody that really doesn’t do anything, but worse yet, they don’t care.” McDonald continued, “You did something – you called the Kennedy Space Center trying to stop the flight – you really cared. That’s the definition of a winner.”

The calls and letters had a miraculous effect on Bob Ebeling. On his deathbed, he finally forgave himself for something that was never his fault. On March 21, 2016, thanks in part to Allan McDonald and hundreds of NPR listeners, Bob died unburdened by the guilt that had haunted him for 30 years.