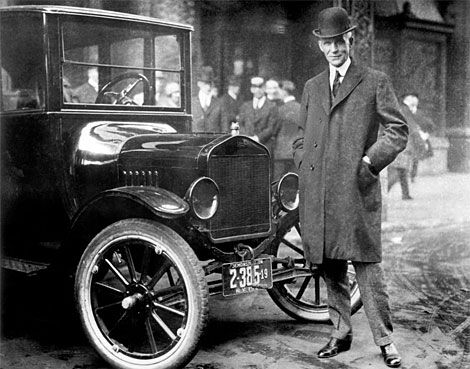 1899 – Detroit, Michigan: At age 36, his associates and friends referred to him as “a day-dreaming mechanic who preferred to tinker with odd machines rather than to work steadily at a responsible job.” He had been fired from one job, quit several others, and had failed twice in business ventures. To their surprise, less than a decade later, the tinkerer was internationally famous.

In 1863, Henry Ford was born outside Detroit, Michigan, in the small community of Dearborn. From an early age he was fascinated with how machinery worked, but he was less enthusiastic about farming, much to his father’s disappointment. At 13, Ford took a watch apart and put it back together. Through a small watch repair business, he taught himself the fundamentals of machine design.

At l5, Ford became an apprentice mechanic at the Michigan Car Company, a railroad car manufacturer. He frequently used his skills to repair his father’s farm equipment and the machines on neighboring farms.

At age 28, Ford got a job as the night engineer for the Edison Electric Illuminating Company. Although he worked his way up to chief engineer, his interest was not in electricity. He devoted his nights and weekends to trying to invent a horseless carriage. That same year Ford drove his first self-propelled vehicle, the Quadricycle, through the streets of his neighborhood. The gasoline-powered vehicle was a wagon with four bicycle tires that steered like a boat using a rudder.

Ford’s passion created a conflict with his job. Edison Electric wanted to promote the 36-year-old year Ford to general superintendent. But he would have to give up his tinkering on gasoline-powered vehicles. Ford quit his job to devote all his time to his horseless carriage project.

In August 1899, Ford started his first company, the Detroit Automobile Company, to manufacture vehicles. The company failed due to a lack of sales. In March 1902, he started another business, the Henry Ford Company. Ford had philosophical differences with the investors – he wanted to mass-produce automobiles and they didn’t. Ford quit the venture, which later became Cadillac.

In June 1903, the few family and friends who still had faith in 40-year-old Ford invested $28,000 to help him start his third automobile company, the Ford Motor Company. On October 1, 1908, after five long years without a profit, Ford Motor introduced the Model T automobile and forever changed how America travels.

The Model T was reasonably priced, reliable and efficient. It came in one color, black. At $850, it was an automobile almost every American could own. By 1913, Ford had built a massive plant in Highland Park, just north of Detroit and developed a moving assembly line. The plant employed 14,000 people. By 1925, Ford produced two million vehicles annually, and half of all automobiles in America were Model T’s.

In the late 1920s, Ford’s sales dropped to No. 3 behind Chevrolet and Dodge. Hoping to improve market share, Ford summoned his engineers. He asked them to design a more-powerful V-8 engine. They told him it was impossible. Ford responded that the engineers who worked for him would develop a V-8 engine. After months of trying, the engineers told Ford that they could not do it. Ford, never one to take no for an answer, sent them back to the drawing board to try again.

On March 31, 1932, almost three years after he commissioned the project, Henry Ford surprised the automotive industry with a V-8 engine. The original engine can be found in the Henry Ford Museum in Detroit. A brass tag on the engine reads, “This is V-8 No. 1 motor. Hold for Mr. H. Ford.”