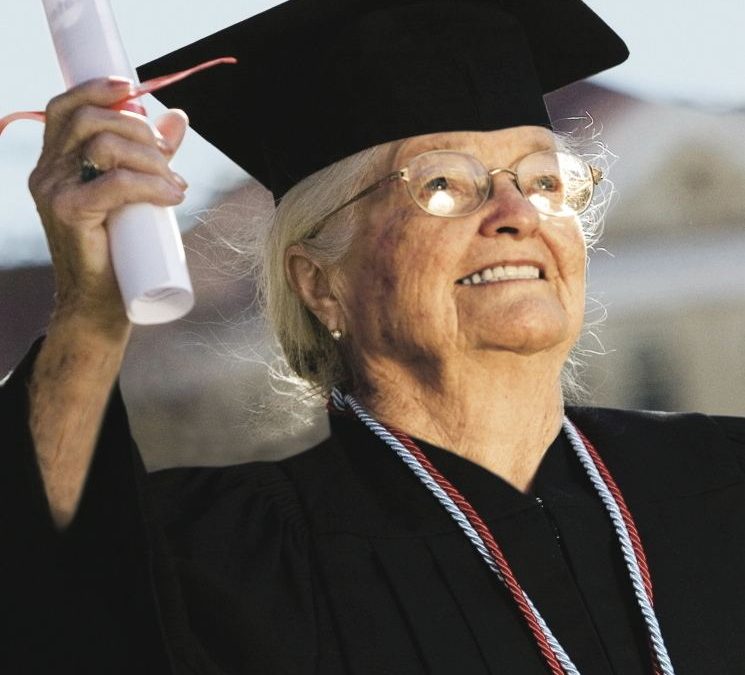 2005 – Fort Hays State University – Fort Hays, Kansas: Nola Ochs was cleaning out a closet when she discovered a brochure from Fort Hays State University. She sent them an email enquiring about her old transcript. Academic adviser, Joleen Briggs, finally found Och’s transcript archived in the basement of the admissions building. Astounded, Briggs called Ochs. She began the conversation, “Mrs. Ochs, are you 94 years old?” Ochs responded, “Well, I don’t keep up with my age, but I was born in 1911. Let’s see now. Yes, I am.”

Nola Ochs grew up on a farm in Jetmore, Kansas. In 1930, she graduated from high school and began taking correspondence courses from Fort Hays, then known as Kansas State College. After passing her teacher’s certification exam, Och’s taught in a one-room school for four years before getting married. Her college pursuits took a back seat to raising four sons and helping her husband on their wheat farm.

After her husband of 39 years passed away in the fall of 1972, Ochs started taking a few classes at Dodge City Community College. Sixteen years later, she finally earned her associate degree. With that milestone behind her, Ochs needed another goal so she began taking additional classes at Dodge City.

In the fall of 2006, after corresponding with Briggs, Ochs left the familiarity of her Jetmore farm after 75 years and moved 100 miles to Hays, where she rented a small on-campus apartment. Her goal: to complete the 30 hours of history and art classes that she needed to earn her bachelors degree.

Faculty and students welcomed the charming, witty grandmother of 13 and great grandmother of 15. She asked for and got no special treatment from faculty because of her age. In her first semester, Ochs and her granddaughter Alexandra took a course together.

In early May 2007, the news spread across the Fort Hays campus that 95-year-old Nola Ochs would break the Guinness World Record for being the oldest college graduate and that Kansas Governor Kathleen Sebelius would be there to present Ochs with her bachelor’s degree.

On May 14, 77 years after she started college, Nola Ochs, with her white hair pulled back in a bun, received her diploma from the governor, graduating with a 3.7 GPA. It was also a special day for 21-year-old Alexandra Ochs who received her diploma and walked across the stage with her grandmother.

After taking the summer and fall off to help with the family wheat harvest, Ochs began work on her master’s degree. In May 2010, the 98-year-old completed her 50-page research paper and passed her final exam to earn her masters degree in liberal studies, with an emphasis in history. She once again she broke a Guinness World Record for the oldest person to ever earn a masters degree. After earning her masters, Ochs applied for and received a graduate teaching assistant position in the history department at Fort Hays.

On November 15, 2011, Ochs celebrated her 100th birthday at a Fort Hays State University basketball game. At the time, she was a graduate teaching assistant working on a genealogy project, and writing a book, Nola Remembers, about her life. Nola Ochs died in 2016 in a senior living facility in Dodge City, Kansas, at the age of 105.

“I don’t dwell on my age. It might limit what I can do,” said Ochs. “Most everyone has an inner desire…something they would like to do. It may seem impossible, but it isn’t. Today there are so many options. I would encourage people to search their desires, to pick out one, and then get out and do it!”

“When you start a thing, don’t quit until you finish it.”    Henry Ford