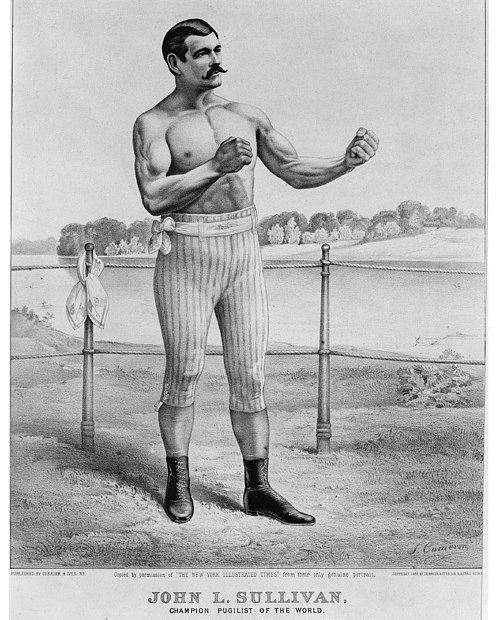 September 7, 1892, 9:00 p.m. – New Orleans, Louisiana: On a hot, sultry night in New Orleans more than 10,000 men, and a few women, crowded into the recently electrically illuminated Olympic Club to watch the Heavy Weight Boxing Championship. Tickets to the match ranged from $5 to $15, a price only the rich could afford. Many in attendance disagreed with the new “sissy” Queensbury rule requiring boxing gloves to be worn for the first time – real boxing involved bare knuckles and bloody noses.

There was a carnival atmosphere in the French Quarter. Newspapers across the country covered the biggest pugilistic event of the century. Two thousand miles away, beacon lights on top of the Pulitzer Building in New York City would indicate to New Yorkers which fighter won the round – red for the champion and white the for challenger.

The title fight featured legendary bare-knuckled champion John L. Sullivan, also known as “The Boston Strong Boy.” The son of parents who fled the Irish potato famine, the hard-hitting, hard-drinking 34-year-old boxer embodied the spirit of the fighting Irish. During an 1887 match, Sullivan broke his left arm in the first round of the fight, but fought five more rounds with his right hand before the match ended in a draw. Sullivan’s handlebar mustache, womanizing, and run-ins with the law endeared him to newspaper reporters.

Sullivan had won the heavy weight-boxing crown in 1882 and successfully defended his title for ten years. He was unbeaten in his 40-fight career. In the era of last-man-standing-wins-the-bout, Sullivan knocked out challenger Jake Kilrain in the 75th round during his last championship defense. The heavy betting indicated that no one believed Sullivan could be beaten.

In the other corner was challenger James J. “Gentleman Jim” Corbett. He represented a new era in boxing. Corbett had never fought with his bare hands. Rather than learn the trade in the streets or bar rooms, he learned boxing technique in the clubs and gyms around San Francisco. The son of a preacher, Corbett had been an actor, attended college, and worked as a bank clerk before becoming a boxer. Corbett at 6’ 1’ and 185 pounds was out-weighed by almost 30 pounds, but was much quicker on his feet.

During the first few rounds, fans booed the dapper collegian as he deftly dodged the punches of the champion. But they were standing in their seats when Corbett broke Sullivan’s nose in round three. With blood dripping from his nose, like a raging bull Sullivan charged Corbett for the next several rounds. Corbett’s ability to side-step punches and his nimble footwork frustrated Sullivan and the crowd who were there to see Sullivan thrash the challenger.

By the 20th round, it seemed the fight might go another 10-15 rounds. But early in the 21st round, Corbett landed a hard left hook to Sullivan’s jaw and he wobbled. After two quick punches Sullivan was on his back on the canvas. Pandemonium broke out as the trainer carried the dazed Sullivan to his corner.

After the fight, a reporter asked Corbett, “How do you become the heavy weight boxing champion of the world?” Corbett answered, “The most important thing to do is to fight one more round.”

The 1982 bout would be the last of John L. Sullivan’s career. He retired to Boston and toured the country starring in vaudeville shows and theatrical productions. Jim Corbett boxed for ten more years with a mediocre career record of 10 wins, four losses, and three draws. But Gentleman Jim would forever be remembered as the man who knocked out John L. Sullivan.