Falling Down and Gettting Back Up – Monroe Journal – November 1, 2018 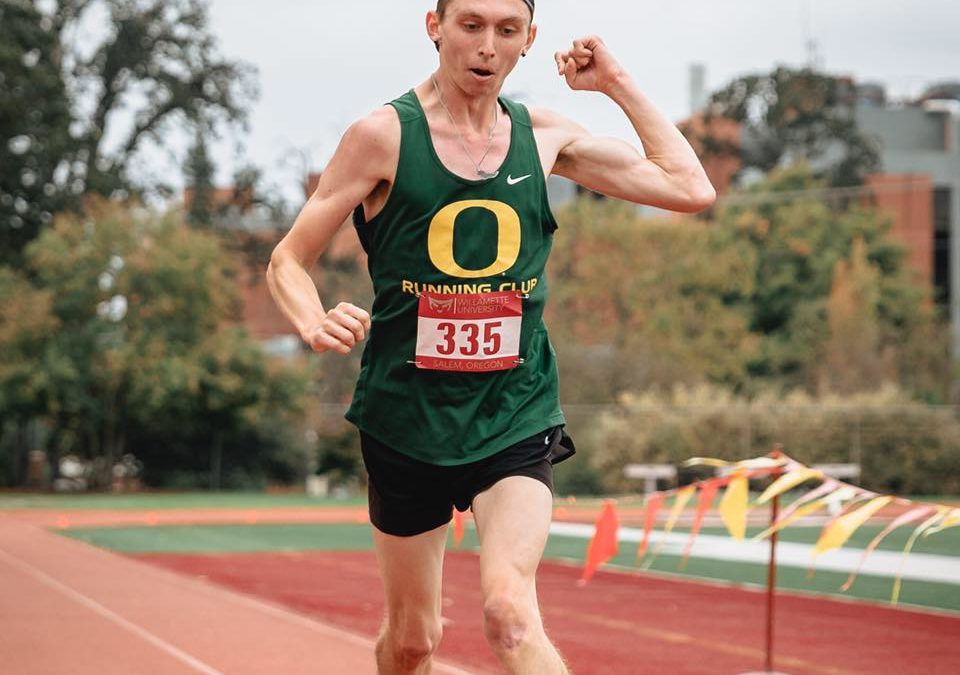 Wednesday, October 8, 2018 – Oregon University – Eugene, Oregon: Justin was exhausted, too tired to notice the cameras. He had just finished a grueling three-mile cross-country race. As he cooled down with his fellow University of Oregon cross-country club team members, John Douglass, the Nike Insight Director, approached him.

Addressing the small group gathered near the finish line Douglass said, “Today, I am here on behalf of Nike to present Justin Gallegos with a three-year contract to be an official Nike athlete.” Hearing these words, Justin collapsed to his knees in tears. It was a moment he could not have dreamed of and a moment he would never forget.

Nike has paid hundreds of professional athletes to wear its brand since they introduced their “Just Do It” slogan in 1988. But never before had they chosen an athlete with cerebral palsy.

Justin was born with cerebral palsy, a neurological disorder that affects movement, motor skills, and muscle tone. Instead of making excuses for his disability, his parents treated him just like the other children. He used a walker until elementary school, and transitioned to knee braces for several years before being able to walk on his own.

Growing up in Santa Clarita, California, Justin loved sports, particularly football but could not participate, so his father suggested he try out for his high school’s cross-country team. Hart High School track Coach Darren James welcomed the freshman.

Justin fell often. Skinned knees and elbows were the order of the day. So was finishing last in races. Justin’s awkward running style with his feet turned inward and his heels splayed to the side drew stares and snickers, but Justin didn’t quit. He was having fun.

Although he often finished last, by his senior year Justin had reduced his mile time from 8:30 to seven minutes and reduced his three-mile cross-country time by five minutes. After high school, he accepted an invitation to join the University of Oregon running club team. Across town, Nike CEO Phil Knight heard of Justin’s story and arranged to meet Justin at Nike headquarters.

Nike asked Justin to work with them to design a running shoe for his unique running gait. In July 2017, Nike introduced the Air Zoom Pegasus 35 to the market. The shoe features additional padding in the toe box and more stability in the heel for runners like Justin. Rather than laces, it has a zippered heel for easy on and off.

Justin was named one of Runner’s World Magazine’s 2017 Heroes of Running. In April 2018, he ran the Eugene Half Marathon finishing in two hours and three minutes – three minutes over his goal. “No amount of bloody knees and worn down shoes can compare to crossing the finish line,” shouted Justin.

John Douglass coordinated the presentation of the contract to Justin to coincide with the World Cerebral Palsy Day on Saturday, October 6th. It is a day established to recognize Justin and the 17 million people in the world who struggle with the condition. Douglass told Justin’s teammates and friends that it was Justin’s spirit that inspired Nike to offer him a running contract. Justin told the small crowd, “Growing up with a disability, the thought of becoming a professional athlete is like climbing Mt. Everest.”

Nike paid Bo Jackson, Tiger Woods, Michael Jordan, and many other professional athletes to wear their brand because it was about winning. When 20-year-old Justin Gallegos dons their gear, it will be about overcoming, persevering and not quitting. Run Justin run. Show ‘em how it’s done.