by peteblack4ua@gmail.com | Jun 2, 2020 | Against the Odds, Never Give Up, Never Lose Heart, Perserverance | 3 comments 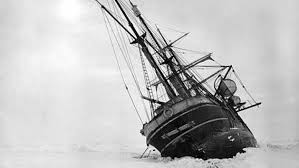 Winter 1915 – Antarctica: Captain Ernest Shackleton made the gut-wrenching decision. They would eat their 70 sled dogs. With their food stores almost gone, the 28-man crew had been expecting the decision. Some were disgusted by the idea – many of the dogs had become pets – but they knew their plight had come to this.

Their ship, Endurance, had been frozen in the polar ice for seven months. The men stared at each other. They were all thinking the same thing, though they dared not voice it to the captain. They were going to die in this God-forsaken place.

British explorer, Ernest Shackleton, had longed to get his name in the Antarctic record book. He failed in his attempt to reach the South Pole in 1909, only to have Robert Peary accomplish the feat two years later. In 1914, Shackleton received financial support from England for the first Trans-Antarctic Expedition. He planned to take two teams of 28 explorers to Antarctica, one to the west coast and one to the east coast. They would traverse the 1,800-mile long continent on dog sleds meeting at the South Pole.

In December 1914, Shackleton’s east coast team set sail from South Georgia Island, 800 miles northeast of Antarctica. As the ship sailed southward, it became frozen in an ice flow in the Antarctic Ocean on January 19. By February, Shackleton realized that the ship would be trapped in the ice until September. The crew would endure the brutal Antarctic winter aboard the ship, six months of total darkness. There is no desolation worse than the polar winter night  – no light, no warmth and no life. Winter temperatures sometimes drop to 100 degrees below zero.

After the dogs were gone, the crew ventured on to the ice to kill all the penguins and seals they could find. They eagerly awaited the spring thaw in September. Shackleton hoped and prayed that the ship, when released from the ice, could work its way back to South Georgia Island.

When the ice break-up finally arrived in late September, the pressure from the shifting ice slowly crushed the ship’s 120-foot wooden hull. Night after night, the crew lay in their bunks, listening to nightmarish sounds of cracking and moaning timbers. On October 24, with the ship taking on water, the crew took the remaining supplies and lifeboats and abandoned ship.

For the next six months, the crew lived in tents on an ice flow adrift in the Antarctic Ocean. In April 1916 when the ice flow broke up, Shackleton ordered the crew into three small lifeboats. After a harrowing five days at sea, they made it to Elephant Island off the Antarctic coast, 350 miles away from where their ship had sunk. It had been 500 days since the crew walked on solid ground.

Shackleton, knowing that they would not survive a second winter, took one of the lifeboats, and with a crew of six set out on an 800-mile voyage across the roughest ocean in the world hoping to reach South Georgia Island. During the journey, they survived a blizzard with 50-foot seas and hurricane-force winds that threatened to sink the raft with every wave. On May 20, 1917, starved and half-frozen, they made it to the whaling station on South Georgia Island.

Shackleton arranged for a whaleboat and headed back to Elephant Island to rescue his remaining men. After three failed attempts due to sea ice, he appealed to the Chilean government for help. They allowed him the use of a navy tugboat and on August 30, 1916, Shackleton reached Elephant Island. The 22 men left behind never lost hope that their courageous captain would come back for them.

Ernest Shackleton had only one rule during the perilous expedition – he refused to let his men complain about their circumstances. Despite the dire conditions he demanded that they remain positive. Although some lost hands and feet, all 28 men survived the 19-month ordeal. Buoyed by their leader’s irrepressible optimism, they never quit fighting despite the impossible odds against them. More than 100 years later, business schools and the military still teach Ernest Shackleton’s leadership principles.