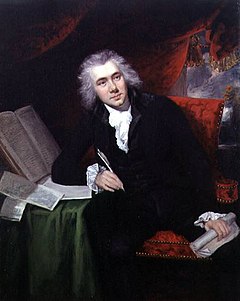 On February 26, 1791, 88 years old and in failing health, Methodist theologian John Wesley penned a letter to his good friend in the faith, William Wilberforce. It was the last letter he ever wrote. Wesley, a long-time outspoken opponent of the British slave trade, wrote to encourage Wilberforce to continue his valiant fight against slavery in Parliament. Four days after writing the letter, Wesley died. The letter read:

Unless the divine power has raised you up…I see not how you can go through your glorious enterprise, in opposing that execrable villainy, which is scandal of religion, of England, and of human nature. Unless God has raised you up for this very thing, you will be worn out by the opposition of men and devils. But, “If God be for you, who can be against you?” Are all of them stronger than God? O “Be not weary in well doing!” Go on, in the name of God and in the power of His might, till even American slavery (the vilest that ever saw the sun) shall vanish away before it. That He who has guided you from your youth, may continue to strengthen you in this and all things, is the prayer of,

When Wilberforce received Wesley’s letter, he was once again facing a discouraging defeat in his attempt to abolish Britain’s slave trade. Wilberforce had delivered an impassioned four-hour speech against slavery to the House of Commons in Parliament; only to have his bill soundly defeated 163 to 88. Wesley’s letter not only encouraged him to continue the fight that spring of 1791, but it was an inspiration to him for the rest of his life.

William Wilberforce was born in Hull, England, in 1759, and at age 17 entered Cambridge University. In 1780, while still a student at Cambridge, he was elected a member of the House of Commons, representing his hometown of Hull. Although slavery had been legal in the British Isles for hundreds of years, Wilberforce became more attuned to the appalling practices of African slavery following his conversion to Christianity in 1785.

In May 1789, motivated by his desire to put Christian principles into action, Wilberforce introduced twelve resolutions to Parliament condemning the “morally reprehensible” treatment of Africans, particularly on slave ships. British cargo ships would carry goods from England to Africa, then transport slaves – who were chained and often stacked like logs for shipping purposes – to the West Indies, and from there would return to England with slave-grown products like sugar, tobacco, and cotton.

With eighty percent of England’s foreign income based on the slave trade, Wilberforce encountered violent opposition to his resolutions. Although frequently vilified by his colleagues, Wilberforce introduced anti-slavery bills in 1792, 1793, 1794, and every year thereafter, for the rest of the decade.

In 1804, Wilberforce was successful in getting a bill passed by the House of Commons, only to see it defeated in the House of Lords. Finally, on March 25, 1806, after 18 years of speeches and legislation on the part of William Wilberforce, Parliament passed the Slave Trade Act.

The Slave Trade Act was passed, but slavery did not go away. The law was not strictly enforced, and many slave traders ignored it completely. Wilberforce continued his campaign; he gave his final anti-slavery speech in April 1833. William Wilberforce died on July 29, 1833. Two days after his death and forty-four years after he had given his first anti-slavery speech, Parliament passed a law abolishing slavery forever in England, saluting William Wilberforce and freeing 800,000 slaves.

Although he did not live to see the realization of his dream, no one was more responsible for the demise of slavery in the British Empire than William Wilberforce. On numerous occasions Wilberforce had been tempted to give up the fight. However, every time he became discouraged, he would return to Wesley’s letter, and Wesley’s words never failed to encourage and strengthen him.

“The power of words is immense. A well-chosen word has often sufficed to stop a flying army, to change defeat into victory, and to save an empire.”           Emile De Girardin