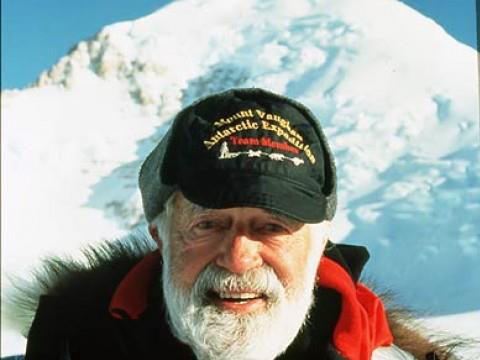 Twenty-two-year-old Harvard University student Norman Vaughan was trying to make the freshman football team when he read the headlines in a Boston newspaper, “Byrd to the South Pole.” Thoughts of the expedition consumed him and he told his four roommates, “I’ve got to do this.” They all laughed, but they knew that he had dropped out of Harvard three years earlier and used sled dogs to deliver medical supplies in Labrador. Vaughan was drawn to things that would cause others to run away.

The following day Vaughan showed up at Richard Byrd’s home in Boston to sign up for the expedition but the maid refused to let him speak to the Admiral. Undeterred, he tracked down W.A. McDonald, the journalist who had written the article and convinced McDonald to send Byrd the message: “I have sled dog driving experience in Labrador. I will leave Harvard to go to New Hampshire to assemble and train your 100 dogs. I will do all of this for no pay.” After 11 months of Vaughan’s persistence, Byrd accepted his offer and Vaughan dropped out of Harvard a second time for a mission to explore the South Pole.

In the summer of 1928, Vaughan was part of the team that established Little America, Byrd’s basecamp on the Antarctic’s Ross Ice Shelf. His well-prepared Husky sled teams helped in the successful mapping of the polar region. Admiral Byrd was so pleased with Vaughan’s contribution that he named a 10,300-foot mountain, “Mount Vaughan.”

In 1932, Vaughan represented the United States in the winter Olympics in Lake Placid, New York; the only time dog sledding was a demonstration sport in the Olympics. Later, during World War II, his dog sled ambulance teams rescued many American soldiers in Germany, France, and Belgium. After the war, Vaughn became chief of search and rescue for the International Civil Aviation Organization. During his lifetime, he was an advertising executive, a snow mobile dealer, a ski instructor, and a sled dog trainer.

In 1971 at age 65 he moved to Alaska. Vaughan was 72 when he first raced the Iditarod Sled Dog Race, which at almost 1,200 miles, is Alaska’s longest and most grueling dog race. He participated in the event 13 times before race organizers kicked him out for being too old and slow. Shortly after this, the 84-year-old Alaskan dog sled racing legend was selected to the Alaska Musher Hall of Fame.

On the day that Admiral Byrd named the mountain for him, Vaughan had told Byrd, “One day I will come back and climb it,” to which Byrd had replied, “Norman, I believe you will.” It was an opportunity that Vaughan dreamed about for more than 60 years. At age 87, he decided to finally climb his mountain to celebrate his 88th birthday.

Vaughan raised more than a million dollars to fund the expedition, no small thing for an octogenarian planning to use sled dogs to climb a mountain. When one of the expedition’s supply planes crashed on take-off for Antarctica, the expedition had to be canceled. Friends and family suggested that Vaughan scrap the mission, but he responded, “Dream big – dare to fail.” It had become the theme of Vaughan’s life and not the first time the family had heard these words.

In 1994, on his 89th birthday, Norm Vaughan reached the summit of Mount Vaughan, the mountain Admiral Byrd had named for him 65 years earlier. National Geographic accompanied the team in order to capture the story, and Vaughan wasn’t done yet. In 1997, at age 92, he created his own dog sled race – the 800-mile Norm Vaughan Serum Run from Nenana to Nome, Alaska.

Norman Vaughan died December 19, 2005, four days after his 100th birthday. At the time of his death he had been in the early planning stages of a return to Antarctica for a second climb of his mountain.