by peteblack4ua@gmail.com | Nov 21, 2017 | Adversity, Against the Odds, Perserverance 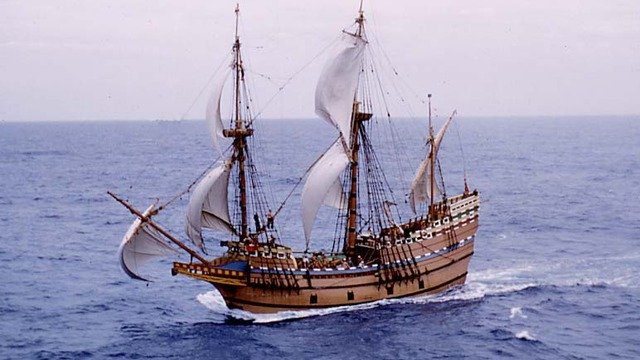 It was as bad a North Atlantic storm as Captain Christopher Jones had ever seen. For several weeks, intermittent gales kicking up thirty, and occasionally fifty-foot waves, had pounded his small sailing ship. A seasoned captain, having spent half his life at sea, he was confident that his 132-foot freighter-turned-passenger ship could make the crossing. It was 1620, and ships were now making the crossing from England to the New World of America on a monthly basis.

Huddled beneath the dripping decks in the cold, damp Mayflower, the 102 passengers were very aware of the challenges they faced. If they survived the ocean voyage, there were the savage Indians to worry about, and they all had heard about the tragedy at Jamestown where 1,000 of the 1,200 pioneers died in the first year from scurvy, pneumonia, and the brutal winter cold. The naysayers predicted the same thing would happen to them.

After several weeks of persistent storms and high seas, Captain Jones presented the passengers with an option: turn around and sail back to England or continue on to the New World. The brave Pilgrims chose to go on. Turning back was not an option. They had their sold houses, and left their jobs, family, and friends behind. They had a dream of a new life – a life free of religious persecution – and a government grant for a tract of land on the coast of the New World.

The Mayflower set sail from Plymouth, England, on September 6, 1620, which was late for a voyage to the New World. Late spring was the preferred departure time when the winds were more favorable and the passengers could arrive before the onset of winter. The ship carried a crew of thirty, plus 102 passengers, comprised of religious separatists from Holland and merchants from London. Earlier expeditions to the New World had involved only men, but the Mayflower passenger list included thirty-four women and children.

The voyage was wet, cold, and miserable. Storms pounded the vessel for four straight weeks, and the passengers were ordered to remain below deck. Freezing water routinely rained down on the frightened passengers, as they huddled in semi-darkness lit only by an occasional candle. They wondered if each dip and roll of the ship would be its last. Rough seas, and the large number of passengers made it impossible for the crew to cook hot meals. The daily fare consisted of moldy cheese, rock-hard-insect-infested biscuits, pickled pork, and salted fish. Making things worse, the salty crew was hostile toward the religious dissenters, openly mocking them when they gathered together on Sundays for singing and praying.

Although confident that God had called them to a make this journey to the New World, there were times when the Pilgrims wondered aloud if they had been foolish to leave their established lives in Europe. Their frequent and fervent prayers could not completely alleviate their fears and doubts. They had no choice but to endure. Finally, on November 9th, sixty-five days out of port, they joyfully made landfall on the coast of New England.

They named their new settlement Plymouth. By early December, having completed the first structure, a 20-foot by 20-foot common house, the men began construction of individual houses. However, extreme winter conditions caused the construction to move slowly. The brutal winter and poor nutrition took its toll on the unprepared pioneers. By early December nine settlers had died of scurvy and influenza, ten more died in January, seventeen in February, and another thirteen in March. Four months after arriving in Plymouth, their numbers had been reduced in half, evidenced by the forty-nine graves on the hillside overlooking the settlement. Due to lack of accommodations, some of the passengers still lived on the Mayflower.

The Pilgrims had tried for several months to make contact with the Indians, when finally on March 22, 1621, God’s providence prevailed. On that day, to the settler’s amazement, two English-speaking Indians, Samoset and Squanto, walked into the village and welcomed them to their new home. Squanto taught them how to catch fish and eels for food, and he instructed them on how to plant corn using fish as fertilizer. On April 5, the Mayflower sailed for England with a crew of twenty, ten having died during the winter. And even though the Pilgrims had lost wives, husbands, fathers, mothers and children, not a single person requested to return home on the Mayflower.

By May, the settlement consisted of seven family houses, four common buildings, twenty acres of corn, and several small garden plots. In the fall, the corn harvest was plentiful. As the first anniversary of their arrival in the New World approached, newly elected Governor William Bradford declared a day to be set aside for giving thanks to God for his blessings. Although about ninety Indians accompanied Squanto and Samoset to the first Thanksgiving celebration, there was plenty food for everyone. Deer, turkey, fish, eels, carrots, turnips, cucumbers, cabbages strawberries, plums and cherries and more for all to eat.

Shortly after the celebration, a second group of 35 people arrived from England. Encouraged by their arrival, the small colony knew the worst was over. They would survive and prosper. Lesser men and women would have given up in the storm and sailed back to England, or would have returned in April on the Mayflower. But these hearty souls had been knit together by their struggles and hardships and unified by their common courage and their dream for a better life.