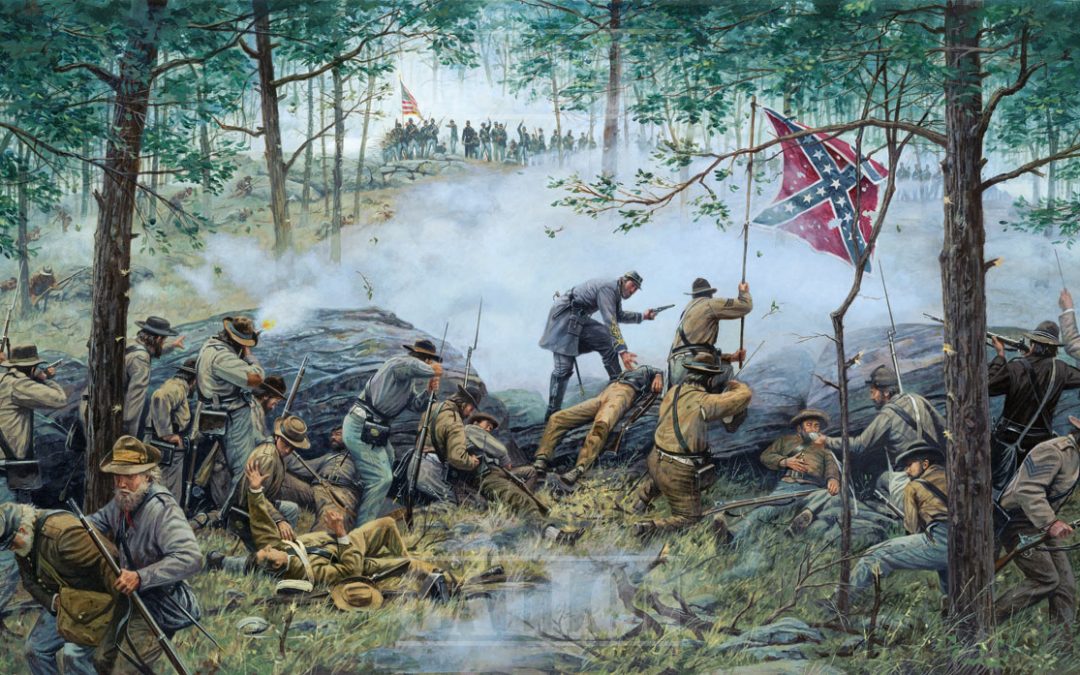 Friday July 3, 1863 – Gettysburg, Pennsylvania: It was a hot, sultry afternoon. Joshua Chamberlain and the 20th Maine Regiment were positioned on Little Round Top, a hill at the extreme left end of a line of 80,000 Union soldiers, which stretched out three miles to Gettysburg. A year earlier, 34-year-old Chamberlain had been a professor at Bowdoin College in Maine. On this afternoon, he was the colonel in charge of the 20th Maine.

Chamberlain’s unit had formed in the summer of 1862 with almost 1,000 volunteers. A year later they joined General Meade in southern Pennsylvania. After marching 100 miles in five days in the hottest weather any of them had ever seen, Chamberlain’s regiment reached their position at Little Round Top at midnight two days before.

Chamberlain’s orders were to defend the position, the highest point on the battlefield, at all costs. “You cannot withdraw under any conditions,” he had been commanded. Chamberlain understood that if he let the Rebels break through, the battle might be lost. He could not retreat, and he knew it.

All day Thursday the fighting was fierce. Casualties were high and Chamberlain was concerned that another day like that would decimate his remaining 300 men. They awoke Friday morning, exhausted and hungry, their meager food rations gone.

At 3 p.m. on Friday afternoon the Alabama 15th and 47th Regiments made a charge up Little Round Top. Chamberlain’s men were positioned behind a 100-yard-long low rock wall they had built. The 20th Maine stopped the Rebel charge, only to face a second charge, a third, and then a fourth charge. As the sun set, the Rebels were regrouping at the bottom of the hill.

Chamberlain was down to roughly 200 soldiers, and they were low on ammunition. First Sergeant Ellis Spear approached Chamberlain and reported, “Colonel, they are forming again, we’ve lost almost a third of the men, we’re almost out of ammo.” Spear suggested they consider pulling out. Chamberlain replied, “Take ammunition from the wounded. Not pulling out, carry out the order!” Spear shouted, “If they come again, you know we won’t hold ‘em.”

Chamberlain paused while Spear and several officers awaited his decision. Chamberlain looked from face to face. If he retreated the hill was lost. After a long moment, Chamberlain shouted, “Fix bayonets – Charge!” The men stared at him in disbelief. But jumping the wall, stepping over the bodies of the dead, and screaming like wild animals, they charged down the hill.

Chamberlain watched as the rebels turned and ran back down the hill. They were surprised and uncertain about what was happening. Assuming Union reinforcements had arrived, the Rebel soldiers surrendered. As night fell, the 20th Maine, with help from the 83rd Pennsylvania Regiment, captured about 400 confederate soldiers.

Colonel Joshua Chamberlain knew his position at Little Round Top was a critical one, but he could not have imagined the potential implications of carrying out his orders and not retreating on that hot July afternoon. Like Chamberlain, we may never know the consequences of our decisions when we choose to persevere even when the odds seem overwhelming.