by peteblack4ua@gmail.com | Nov 29, 2021 | Beating the Odds, Determination Despite the Odds, Perserverance | 2 comments 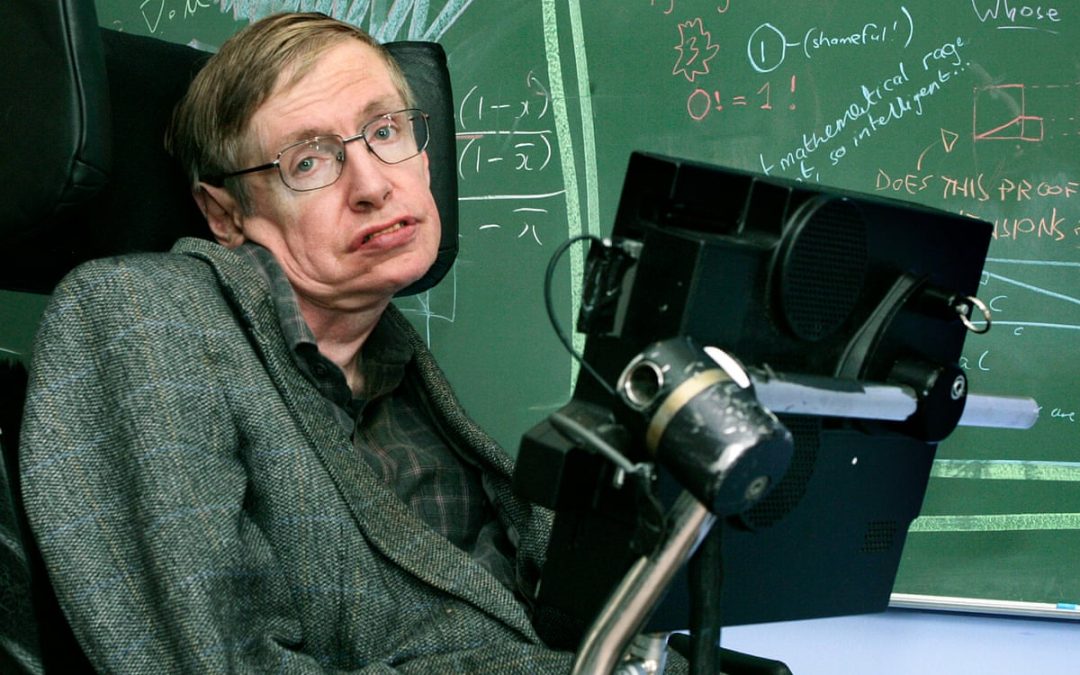 “However difficult life may seem, there is always something you can do and succeed at. My advice to other disabled people would be concentrate on things your disability doesn’t prevent you doing well, and don’t regret the things it interferes with. Don’t be disabled in spirit as well as physically.”                     Stephen Hawking

Fall 1963 – Oxford, England: It began with increasing clumsiness and tripping on the stairs. By the time Stephen Hawking went home from college for Christmas break, his parents noticed he occasionally slurred his words. The shocking diagnosis came a few months later. The 21-year-old Cambridge University physics major had ALS, better known as Lou Gehrig’s disease. Hawking was told he would not live to see his 25th birthday.

Despite average grades, his fellow high school students had recognized Hawking’s brilliance and dubbed him “Einstein.” He chose Cambridge because both parents had attended and he got a near perfect score on the entrance exam. After getting married to Jane and completing his undergraduate work in physics and mathematics, Hawking received his PhD in applied mathematics and theoretical physics in March 1966, at about the time he was supposed to have died.

After completing his doctorate in the study of the origin of the universe and Albert Einstein’s field of general relativity, Hawking joined the faculty at Cambridge. By the early 1970’s, his disability had progressed from a cane, to crutches and to a wheelchair. He could no longer lecture.

As Hawking’s physical condition deteriorated, his intellectual accomplishments soared. His research into black hole phenomena produced new information about the universe and he answered one of Einstein’s questions regarding unified field theory.

In 1979, Hawking became the Lucasian Professor of Mathematics at Cambridge, the distinguished professorship once held by Sir Isaac Newton. At that point, only family and close friends could understand his speech. Hawking resorted to computer software to aid him in oral and written communication and continued his research.

In 1985, Hawking was placed on life support after a severe bout of pneumonia. Jane refused to allow the doctors to take him off life support. Instead a permanent tracheostomy was inserted to help him wean off the ventilator and allow him to be fed through a tube. He was eventually able to leave the hospital but required round-the-clock nursing care.

Hawking remained in the Lucasian Professorship until 2009 when he became Director of Research at the Center for Theoretical Cosmology. He authored 15 books and scientific papers, including A Brief History of Time, which was on the British Sunday Times best seller list for a record-breaking 237 weeks and has sold more than 10 million copies.

Hawking continued his research and traveled to speak at various scientific gatherings, despite the fact that he could only move his eyes and a few muscles in his face. In order to communicate, he used a cheek muscle to activate a computer, which selected commonly used terms and phrases and made them audible through a speech synthesizer.

Hawking is a member of the British Royal Society, has won the U.S. Presidential Medal of Freedom, and is ranked at No. 25 on the BBC’s poll of the 100 Greatest Britons. Stephen Hawking died in March 2018 at age 76, more than 50 years after his anticipated death.

Hawking’s fellow high school students were right. He is the Einstein of his generation – the most brilliant theoretical physicist since Albert Einstein. His IQ is among the ten highest in history. Brian Dickie, the research director at the Motor Neuron Disease Association, an organization that researches ALS says, “In my opinion, Professor Hawking’s victory over his disease is no less deserving than his scientific research of a Nobel Prize.”