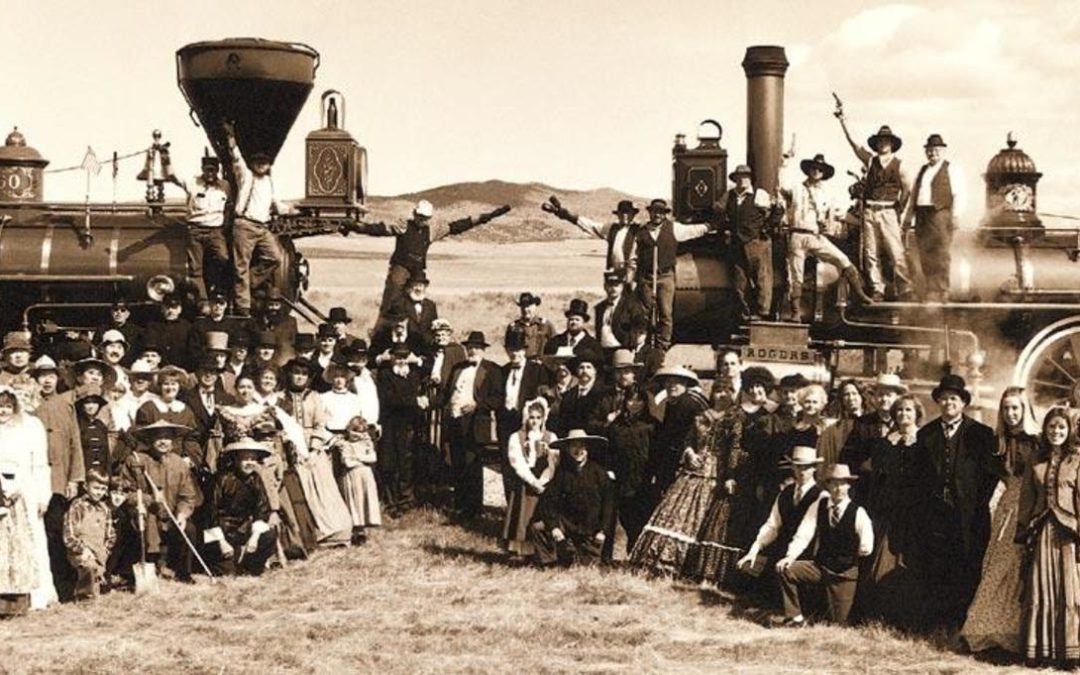 1804 – Washington, D.C.: Thomas Jefferson dreamed of a practical route from the East Coast to the Pacific Ocean. He commissioned Meriwether Lewis and William Clark to find a water route. Two years later, they returned having failed in their mission. By 1860, it was still easier to travel from New York to Europe than to California. Two travel options existed: five months by wagon train or six months around the tip of South America by ship.

On July 1, 1862, President Abraham Lincoln, a lover of railroads, revived Jefferson’s dream signing the Pacific Railroad Act to create a transcontinental railroad from New York to San Francisco. Lincoln received scathing criticism from both Congress and the newspapers for wasting government money on the ridiculous project.

For more than 25 years, railroad experts had believed connecting the two oceans by rail was impossible. The obstacle was the Sierra Nevada Mountains in California, with 14,000-foot peaks. Getting a steam locomotive over the mountains was inconceivable.

When Lincoln signed the legislation, Theodore Judah, the chief engineer for the Sacramento Valley Railroad in California, was at the table. He had traveled to Washington to help sell the railroad idea to Congress. Judah had studied engineering at Rensselaer Polytechnic Institute in Troy, New York, where he first dreamed of a railroad across the country. The newspapers referred to the 36-year-old civil engineer as “Crazy Judah,” and the name stuck.

Theodore Judah knew what others didn’t. He had surveyed the old wagon train route through the mountains. His survey indicated the shortest and best way was through the 7,000-foot Donner Pass. Although extremely difficult to build, the project would involve the highest bridges ever constructed and would require 15 tunnels through solid granite, the long, gradual grade might work.

Construction of the transcontinental railroad began on January 8, 1863. Two companies were chosen to build the mountain section. The Union Pacific started on the east side, and the California Railroad began on the west coast. The Union Pacific used Civil War vets and 3,000 Irish immigrants, while the California Railroad workers included 10,000 Chinese immigrants, many of who had come for the gold rush 15 years earlier. A total of 25,000 people were employed at multiple locations during the project.

The construction progressed with only manual tools such as picks, hammer drills and dynamite. It would be 40 years before the bulldozer was invented. The work progressed 24/7 despite rain, snow or blistering summer temperatures. The Sierra Nevada’s receive the highest snowfall amounts in the continental U.S. and there were 40 snowstorms during the two years it took to get through the mountains.

On May 10, 1869, the last of seven million spikes, the golden spike, was driven at Promontory Summit, Utah. The iron spike was wrapped with a telegraph wire that connected the two coasts. With a dot, dot, dot “It is done!” a message was sent simultaneously to San Francisco and New York. The wires were also connected to canons and fireworks in the two cities as America celebrated the completion of the monumental feat.

For more than 2,000 years, man had traveled at basically the same speed and communicated the same way. Now people could travel at the breakneck speed of 25 miles per hour and the telegraph could communicate instantly between Washington D.C. and San Francisco. The cross-country trip now took just three weeks, thanks in part to a young dreamer with a crazy idea named Theodore Judah.

Ironically neither Abraham Lincoln nor Theodore Judah ever got to ride the train to the West Coast. Lincoln’s presidency began, and ended, with a 700-mile train ride from Springfield, Illinois to Washington D.C. More than 25 million people paid their last respects to the president as the “Lincoln Special” made the final trip in April of 1865.

Just four months after railroad construction began, Theodore Judah died from yellow fever. Both visionaries were surely looking down when the first train from New York came through the tunnels in the Sierra Nevada Mountains on its way San Francisco.