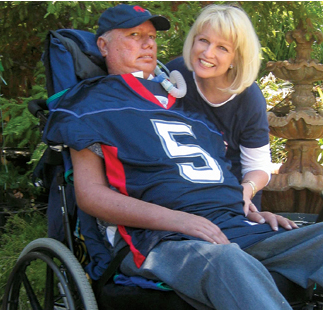 December 1984 – Los Gatos, California: Coach’s death seemed imminent. His 95- pound frame clung to life support in his bedroom. Ramona, one of his nurses, felt impressed to lay hands on him and pray. As she did, Coach felt a jolt of power flow through him. A wilted amaryllis plant next to the bed suddenly bloomed and he was able to eat two bowls of soup – more than he had eaten in two weeks. Charlie and his wife Lucy were saved that night.

Charlie Wedemeyer was born and raised on the island of Oahu, Hawaii. The 5’7” quarterback was voted the best high school football player in Hawaii during the decade of the sixties. In 1975, after a successful football career at Michigan State University, he married Lucy Dangler, his high school sweetheart, and got a job coaching football at Los Gatos High School in California.

In February 1978, a few months after becoming the high school’s head coach, 30-year-old Wedemeyer was diagnosed with Lou Gehrig’s disease. Doctors told him he would live a year. Lucy told him, “This isn’t your disease, Charlie. It’s our disease. Whatever happens we will face it together.”

Los Gatos won back-to-back conference championships in 1978-79. By then Coach had difficulty gripping chalk, and after several falls down the steps at school, the school principal moved his classroom to the ground floor. Lucy was shaving him and driving him to school. In 1980, Coach was voted conference coach of the year after winning a third straight championship. The principal did not renew Coach’s teaching contract but allowed him to continue to coach.

By the 1982 football season, Coach was in a wheelchair, but used a golf cart during games. His team was 9-1 and won their fifth conference championship in six years. Lucy drove the golf cart the following season. At that point, Coach had difficulty speaking so Lucy used signs to relay the plays to an assistant coach.

In the spring of 1985, a few months after Coach’s miracle, Lucy asked his doctors to place him on a ventilator and remove his “Do Not Resuscitate” status. The doctors were opposed. “Charlie has already beaten the odds. He should give up and die.” Lucy got her way and the ventilator had immediate results – Coach no longer struggled to breathe and could sleep through the night.

Next came the feeding tube. Coach began to gain weight. On life support, with Lucy at his side calling plays, he once again coached the 1985 season from his golf cart. Los Gatos won the California Central Coast Championship. After the season, Los Gatos demoted Coach to coach the freshman team the following season. It was OK with him. It allowed more time for the speaking requests that flooded his mailbox.

With Lucy reading his lips and delivering his speeches, Coach spoke at churches, and schools, at Folsom Prison and to scientists at NASA. “I believe it’s not our responsibility to know why,” Coach told audiences, “but to trust that God has a reason and purpose for everything that happens to us. And He can salvage good out of any circumstance.”

In July 2007, Charlie Wedemeyer was inducted into the National High School Football Hall of Fame. He died three years later, on June 3, 2010, more than three decades after his initial diagnosis. Several thousand former players, family, friends and celebrities attended the 64-year-old coach’s memorial service at Calvary Church in Los Gatos. They came to celebrate the life of a warrior. A fighter. A guy who refused to give up despite the odds.

“We will all be confronted with some adversity that seems insurmountable and we will have a choice. We can feel sorry for ourselves and make everyone around us miserable, or we can, with God’s help, become stronger and make a difference.”                                   Charlie Wedemeyer