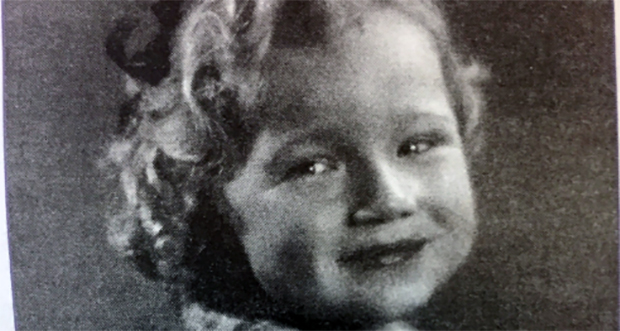 In 1986 fifty-seven-year old Sharon Elliott was flabbergasted to learn from her 86-year-old mother, Faith Morrow, that she had been adopted. Faith had promised herself that she would never tell Sharon her secret, but dying from cancer changes your plans. Sharon had been shocked and hurt to discover she was adopted and astonished to learn the unusual circumstances surrounding her birth. Over the years at Christmas she had read the story of the Hatbox Baby in the Phoenix newspapers, but she never imagined that she was that baby.

The story began on Christmas Eve, 1931, in Mesa, Arizona. Ed and Julia Stewart had decided to drive Julia’s 15-year-old twin cousins to Superstition Mountain, about 50 miles away, to see snow. It was a fun day, but late in the afternoon on the return trip, Ed’s car broke down in the desert. While Ed tinkered under the hood, Julia took a short walk. Hearing a cry that sounded like a baby or small animal, she quickly ran back for Ed.

They found a black cardboard hatbox underneath a mesquite bush and when Ed nudged the box with his foot, they heard the noise again. To their horror, when they opened the box they discovered a tiny redheaded baby girl wrapped in a blue blanket lying inside. Ed got the car running and the couple rushed the infant back to Mesa. They took the baby to Sheriff Joe Maier, who was working late on Christmas Eve. He took the baby to a local maternity home to be checked by a doctor. The baby was hungry and cold, but otherwise healthy, and about a week old.

The staff of the maternity home cared for the baby and they named her Baby Marian. The story of the Hatbox Baby, a Christmas miracle in the Arizona desert, made national news and brought hope to a nation in the throes of an economic depression. Gifts, clothes, and baby items arrived from around the country. During the next few weeks seventeen couples applied to adopt Baby Marian, and on February 16, County Superior Court Judge E.L. Green awarded the baby to Faith and Henry Morrow. They re-named their daughter Sharon.

When Sharon was eight, the family moved to Southern California where she graduated from high school, married, and had three children. She worked a career in the aerospace industry but when Faith got sick, Sharon retired and moved back to Mesa to be close to her mother.

When Sharon learned of her adoption, she contacted Orphan Voyage, an organization that helped children find their birth parents. They tried unsuccessfully for three years to find her birth parents. In 1989, due to the mysterious circumstances of the birth, NBC’s Unsolved Mysteries televised the story. The program chased numerous leads but failed to locate a birth mother. Sharon was disappointed and embarrassed when the show aired, because they insinuated the Stewarts had placed the baby in a hatbox and made up their story in order to protect an unwed teenage mother.

Eighty-one Christmas Eves later, the mystery of the Hatbox Baby remains unsolved. Why did the Stewart’s car break down at a certain spot? And what made Julia decide to take a short walk? Was it a Christmas miracle or was it staged? At 84 Sharon still isn’t sure but at this point it doesn’t matter. She has a wonderful family and has had a great life.

The real miracle of Christmas occurred several thousand years ago when a baby was born in a barn in an obscure little town on the outskirts of a desert. God, who created the universe and who dwells outside of time and the physical realm, entered His creation disguised as a baby. To this day that baby’s birth remains the greatest miracle of all time.

“What keeps the wild hope of Christmas alive year after year in a world notorious for dashing all hopes is the haunting dream that the child who was born that day may yet be born again, even in us.”  Fredrick Buechner