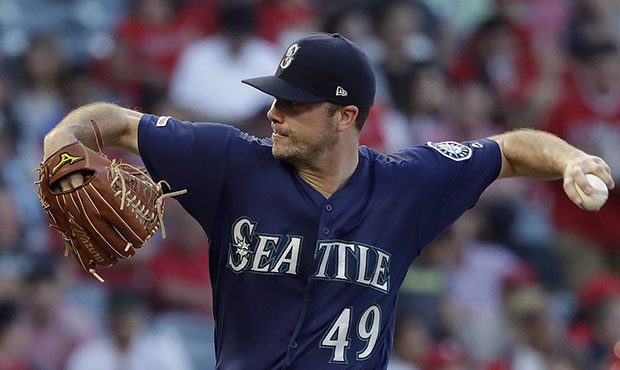 June 21, 2011 – Petco Park Stadium, San Diego, California: San Diego Padres pitcher Wade LeBlanc listened to the voice mail informing him he was going back to the Padres’ Triple-A team in Tucson, Arizona. It was the eighth time in three years he had been sent down to the minor leagues. He knew the drill well – pack up your bags, pick up your airline ticket and get lost in Tucson. His major league career was at rock bottom. Again.

LeBlanc hailed a cab outside the stadium. “Aren’t you Wade LeBlanc?” The driver asked, “Me and my buddies watched you pitch last night.” LeBlanc nodded his head, not wanting to be reminded of the previous evening’s pitching performance. “You’ve got good stuff,” The cabbie continued, “I don’t know. I’m not a player, but maybe you should try raising your arms over your head in your windup.” LeBlanc rolled his eyes. That was all the 26-year-old lefty needed on this discouraging day – a San Diego cab driver telling him how to pitch.

LeBlanc was born in Lake Charles, Louisiana in 1984. He was an outstanding pitcher at Barbe High School, and despite having a fastball that only clocked at 86 mph on his best day, he signed a baseball scholarship with the University of Alabama in 2003. LeBlanc became the first freshman in Alabama history to be chosen by Baseball America as national freshman of the year. After a stellar career in Tuscaloosa, he was a 2nd round draft pick of the San Diego Padres.

In 2008, after three seasons in the minor leagues, LeBlanc finally got the call to report to the Padres major league team in August. He pitched in five games with a 1-3 record. During the next three seasons, LeBlanc lived a nomadic existence. He pitched in 49 games for the Padres but was frequently sent down to the minors to make room for other pitchers on the roster. He endured all the jokes about his fastball. “Le Blanc throws like he’s afraid he will hurt the catcher’s hand; he pitches like he’s tossing an egg; or he pitches like he might break the baseball.

In July 2011 when LeBlanc was sent to Tucson again, he figured his career was over. He told pitching coach Steve Webber he was going to change his windup. What did he have to lose? Instead of keeping his hands close to his chest, he would raise them over his head like the cab driver suggested. In his next start, he pitched seven innings and only gave up one hit.

During LeBlanc’s 15-year professional career, he has played for seven major league teams, including the Florida Marlins, Houston Astros, New York Yankees, San Diego Mariners and Baltimore Orioles. He has pitched in 240 games with a record of 45 wins and 47 losses. In 2018, his best season, he pitched in 32 games and was 9-5 for Seattle.

In March 2021, at age 36 and despite being the oldest man on the Baltimore Orioles team, the veteran pitcher reported to spring training looking for a key role on the pitching staff. LeBlanc still holds his hands over his head in his windup. There have been plenty of potholes and perhaps not enough pinnacles in Wade LeBlanc’s career, but he’s still pitching. He says, “I think I could have been more successful earlier in my career if it wasn’t for the self-doubt and stubbornness. If you had asked me when I was with the Padres at age 26 years if I would still be pitching a decade later, I would have told you no.”

Wade LeBlanc credits the cab driver’s advice with helping to save his career. Although a small change, moving his hands above his head in his pitching delivery made him a better pitcher. He learned to accept the advice of others and not to be so stubborn. And along the way, he learned how to survive through all the ups and downs in his career.

“Advice is seldom welcome, and those who need it most like it least.”  Samuel Johnson