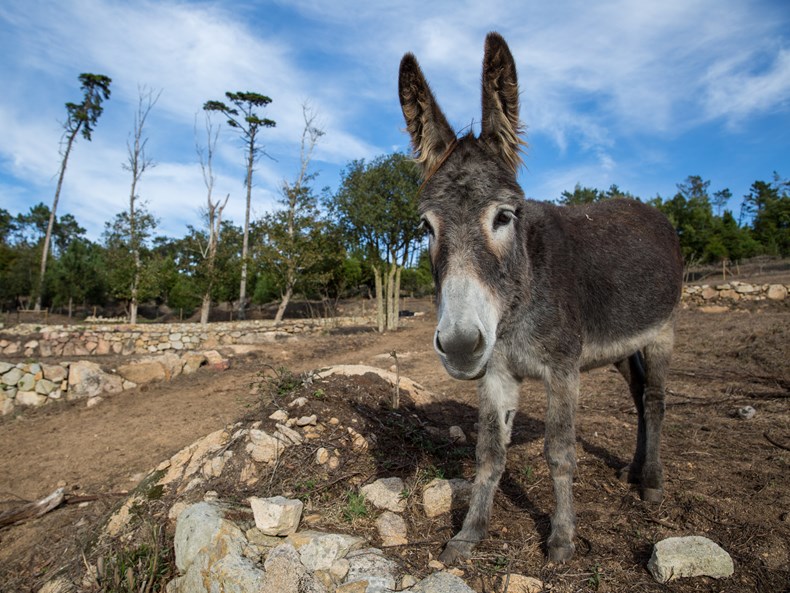 “When you start a thing, don’t quit until you finish it.”    Henry Ford

Sunday, May 8, 2008 – Camp Al-Taqaddum, Falujah, Iraq: U.S. Marine Colonel John Folsom, the top-ranking officer on the base was accustomed to waking up to the sound of helicopter rotors. But on this Sunday morning he was awakened by an unusual sound, “hee-haw, hee-haw, hee-haw.”

Folsom slipped on his pants and ambled outside his barrack to discover a scrawny, grayish-brown, three-foot donkey tied with a rope to a eucalyptus tree. Although Folsom had joked with his sergeant that the next time he saw one of the wild donkeys that roamed the base to catch it, he never thought he would be taken seriously.

Folsom made his Monday morning rounds escorted by the donkey on a rope. By lunch, everyone on base had heard about the colonel’s donkey. A few days later, when the donkey snatched a lit cigarette from a marine’s fingers and ate it, the marines christened him Smoke.

Within a few weeks Smoke was the star of the base and a big morale booster. He learned to open office doors and steal candy off desks. Service men wrote home to their children about him, and someone created a Facebook page for the burro. Because pets were prohibited in combat zones, Colonel Folsom persuaded a Navy physician to declare Smoke a therapy animal.

Everyone on base loved Smoke. In 2009, when their tour of duty ended, the unit that replaced his assured Folsom that they would take good care of Smoke. A year later, as Colonel Folsom prepared to retire from the Marine Corps Reserve, he phoned the major who replaced him to inquire about the donkey. He discovered that Smoke had been given to a local Iraqi sheik.

Folsom knew of the fate donkeys in Iraq – no longer used for farming, most were abandoned to run wild or were killed. Reminded of the Marine Corps tradition of “No Marine Left Behind,” Folsom decided to bring Smoke home.

It took the U.S. State Department’s involvement to finally track the sheik down. After some haggling, he agreed that the colonel could have the donkey on two conditions – Folsom would have to find someone in Iraq to round up the donkey and he would have to make the arrangements to ship the donkey to his house in Omaha, Nebraska.

Folsom discovered that Operation Baghdad Pups (OBP) had a program for helping reunite dogs and cats with military personnel. Although they had no experience with livestock, Folsom convinced them to give it a try. In mid-January 2011, Smoke was rounded up and shipped to Irbil, in northern Iraq.

OBP spent weeks getting approval to ship Smoke through Istanbul, Turkey, to Germany, and on to New York. On April 5, 2011, Smoke was ready to begin his journey when Folsom was informed that Turkey had not allowed entrance to Iraqi animals since 2003. After three weeks of negotiations with the U.S. Embassy in Turkey, Folsom received approval for the trip.

Smoke arrived in Istanbul on April 19 and was immediately involved in transit issues to Germany. At this point a frustrated Folsom, exhibiting the stubbornness of a donkey, flew to Istanbul, all the while wondering why he ever considered bringing a donkey to Nebraska.

Folsom made multiple calls to German officials, but his pleas fell on deaf ears. That is until he mentioned that the donkey had his own Facebook page. After checking Facebook, the German government contacted a Frankfurt veterinarian who was equally impressed that the burro was on social media and Smoke was cleared to travel.

Smoke finally landed in New York City on May 12, 2011, where Folsom met him. He wasn’t sure it was the same animal, until the burro caught sight of Folsom and greeted him with “hee-haw, hee-haw.” Then the little donkey rubbed up against him.

Smoke served in Wounded Warriors Family Support, a non-profit which Folsom created in Omaha. His role was helping improve the morale of children whose parents had been wounded in military combat. He served faithfully before dying of cancer in August 2012. John Folsom continues to help families of wounded veterans and on the shelf above his desk is an urn containing the ashes of Smoke, his old Iraqi war buddy.