by peteblack4ua@gmail.com | Feb 5, 2018 | Adversity, Against the Odds, Perserverance, Uncategorized 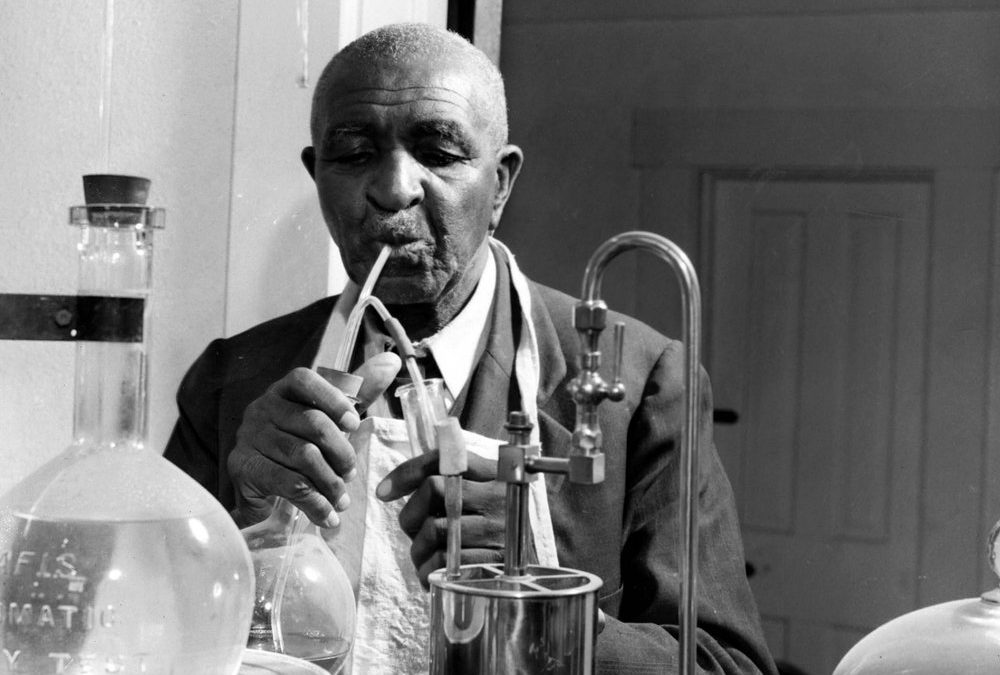 The baby boy was born to a slave woman in a one-room shanty on the Moses Carver plantation about the time the Civil War was ending in 1865. The exact date and year of his birth are unknown. Moses Carver, a German immigrant farmer in Diamond Grove, Missouri, had purchased the baby’s parents, Giles and Mary, for $700 in 1855. When the baby was six months old he, his mother, and a sister were kidnapped by slave traders and sold across the state line to a buyer in Kentucky.

Carver paid a friend to find his slaves and negotiate for their return. The friend traded a horse valued at about $300 to get the baby back. The mother and sister were never found. Moses Carver and his wife, Susan, raised the baby whom they named George Washington. Susan taught young George to read and write and value an education.

As a young child George developed a bad case of whooping cough, which left him too sickly to do the heavy work in the fields. His job was to help Susan with the cooking, sewing, and gardening responsibilities. He became an excellent cook and developed a life-long love for plants and flowers. Because George was not allowed to go to the white school in Diamond Grove, the Carvers sent him ten miles away to a small black academy in Neosho, Missouri, for high school. There he rented a room with a foster family and worked his way through school.

George successfully applied by mail to Highland College in Highland, Kansas, only to have his application rejected when he arrived on campus and administrators realized he was black. He applied to several more colleges before becoming the first African-American student to enroll at Iowa State College of Agriculture, now Iowa State University, in 1891. He worked his way through college by washing and ironing clothes for his classmates. Carver excelled in both botany and horticulture, earning B.S. and Masters degrees in Botany. He so impressed his professors with his intelligence and passion that he became the first black faculty member at Iowa State College.

In 1896, having heard of Carver’s success, Booker T. Washington, the first President of Alabama’s Tuskegee Institute, invited him to join the faculty and start an Agriculture Department. Remembering Susan’s words, “To learn all you can, then go out into the world and give your learning back to the people,” Carver saw a wonderful opportunity to serve the poor families in the South. When the boll weevil devastated Alabama’s cotton crop in 1910, Carver introduced farmers to alternative crops like peanuts, soybeans, and sweet potatoes to offset the cotton losses.

When imported peanuts from China undercut record peanut crop prices in the South, Carver devoted his research to coming up with alternative uses for peanuts. In 1920, he showcased his brilliance as a scientist and inventor by exhibiting 145 peanut products at the United Peanut Association of America conference. Carver would go on to create an incredible 285 different products from peanuts including milk, shaving cream, soap, shampoo, and housing insulation from peanut shells.

Carver’s research into alternative uses for sweet potatoes resulted in 118 products, among them flour, molasses, vinegar, shoe polish, dyes and rubber compounds. He made rope from okra fibers and fertilizer from swamp muck. A gifted artist, Carver’s paintings were exhibited at several World Fairs. He made his painting canvas from peanut shells, his picture frames from corn shucks, and his paints from Alabama clays.

Carver frequently told his students, “When you do the common things of life in an uncommon way, you will command the attention of the world.” And command the attention of the world he did. His research received international acclaim. Three U.S. Presidents – Theodore Roosevelt, Calvin Coolidge, and Franklin D. Roosevelt – met with him. Automobile inventor Henry Ford offered him a salary of $100,000 a year to come to work for the Ford Motor Company. Inventor Thomas Edison offered Carver a job in his research lab in New Jersey. He turned them both down.

Dr. George Washington Carver remained at Tuskegee Institute for 47 years. He never married. His two loves were his work and helping others. He was often seen walking to work in old patched clothes. He gave his meager salary away anonymously to help pay for the education of poor young students, both black and white.

The boy who was once traded for a broken-down horse was elected to the Hall of Fame for Great Americans in 1977 and inducted into the National Inventors Hall of Fame in 1990. Carver died January 5, 1943 at age 78 and is buried next to Booker T. Washington at Tuskegee University.

“He could have added fortune to fame, but caring for neither, he found happiness and honor in being helpful to the world.”        Dr. George Washington Carver’s Epitaph