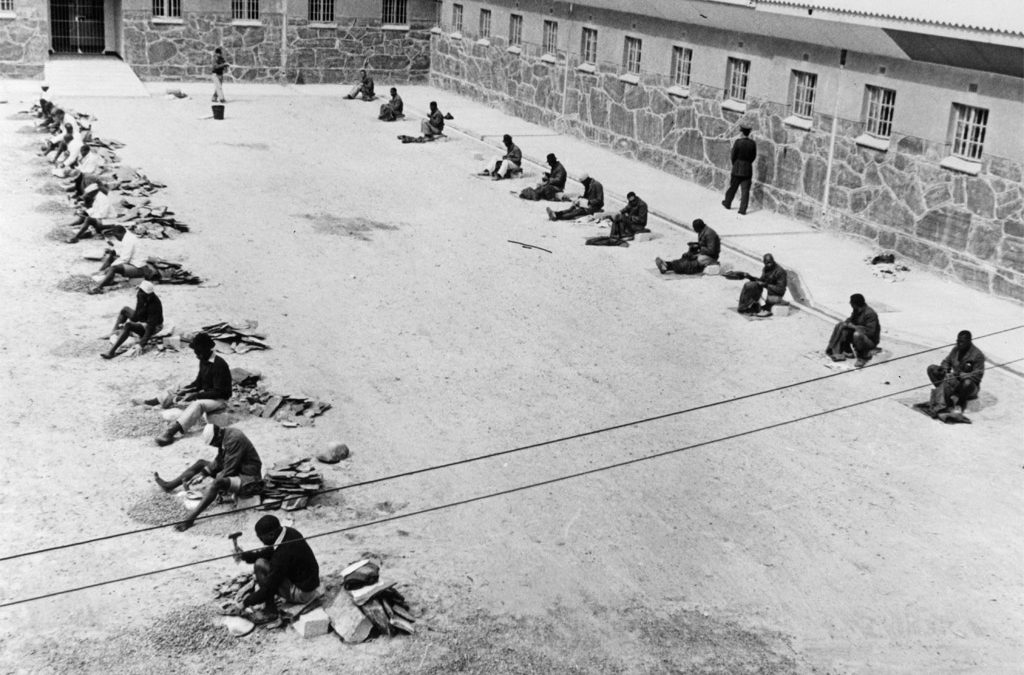 Robben Island was said to be Hell, a place of isolation and desolation, where many died. The small island, just three square miles, located just a few miles off the coast of Cape Town, South Africa had been a prison for political dissidents since the 17th century. The prison was cold, hostile, and notorious for human rights abuses, especially toward Indians and black Africans.

He arrived to begin serving his life sentence for political treason in the winter of 1964. To be given a life sentence at Robben Island was usually a death sentence. Prisoner 466/64 was forty-five years old. A six-foot by nine-foot cell would be his home for the next eighteen years. There was no bed, just a mat on the floor. There was no hot water; the toilet was a ten-inch diameter iron bucket.

He was awakened every morning at 5:30 am by a guard ringing a bell. After washing out his sanitary pot, breakfast was served through the small window in his cell door – a cup of bitter coffee and a small bowl of lumpy cold porridge. Lunch was a bowl of corn or rice, occasionally a vegetable like cabbage or carrots. Dinner was the same as lunch, except a 5 ounce piece of meat was included every other day. Labor in the lime quarry breaking rocks was the order of the day, every day.

At one point every Thursday during his incarceration at Robben Island Prison, he and some his fellow African prisoners were taken outside and ordered to dig a six-foot-deep trench. When the trench was finished, they were ordered to lie in the pit while the white guards urinated on them. Then they covered the pit back up, before being led back to their cells in solitary confinement.

Nelson Mandela was born to the chief in the small South African village of Mvezo in 1918. His African name, Rolihlahla, means troublemaker, and he would live up to his name during the turbulent years of apartheid in South Africa. In 1939, Mandela enrolled at the University College of Fort Hare, the only center of higher learning for blacks in South Africa at the time. While there, he became involved in student government, once leading a boycott against the quality of food, which resulted in a temporary suspension. He left without receiving a degree.

In the early 1950’s, Mandela joined the African National Congress, the oldest Black political organization in South Africa and soon rose to national prominence leading protests against racial discrimination and segregation. For his actions, he was arrested in 1963, and he served twenty-seven years in prison, eighteen of those on Robben Island. Breaking rocks did not break Mandela’s spirit. His imprisonment would become the crucible that transformed him. His peaceful, positive attitude, despite unimaginable circumstances, would not only influence prison guards and officials, but a growing number of followers across South Africa.

On February 15, 1990, the world watched on live television as Mandela, at age seventy-one, was finally released from prison. Upon arriving in Cape Town, a crowd of 500,000 people greeted him. On April 27, 1994, seventy-five-year-old Nelson Mandela was elected the first black president of South Africa, winning the country’s first multiracial election with 62 percent of the vote.

As a gesture of peace and forgiveness, Mandela instructed his advisors to invite the Robben Island prison guards who had been responsible for abusing him to his Presidential inauguration. When told by his advisors that he did not have to invite them, he responded, “I don’t have to be President, either.” Inviting the guards was a choice he made to begin the healing process. Mandela’s presidency was one of healing race relations and served as a shining example of the incredible strength of the human spirit to persevere in the face of unbelievable adversity.

Looking back, Mandela says, “There were many dark moments when my faith in humanity was sorely tested. But I would not, and could not give myself up to despair, that way led to defeat and death.”

“Difficulties in life are intended to make us better, not bitter.”       Dan Reeves