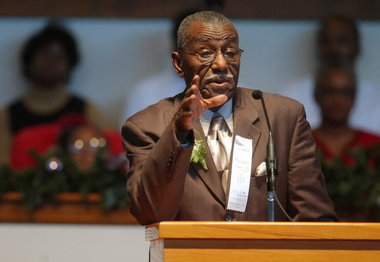 Christmas night, 1956 – Birmingham, Alabama: The late-night explosion reduced the small house to shambles and rattled windows a mile away. Ku Klux Klan members had placed 15 sticks of dynamite beneath the home of Reverend Fred Shuttlesworth, pastor of Bethel Baptist Church. Neighbors and police arrived to find Shuttlesworth, his wife, and children, miraculously unharmed, climbing out of the rubble.

“Reverend, I know these people,” said one of the policemen referring to the bombers, “These people are vicious. I didn’t think they would go this far. If I were you, I’d get out of town.” Shuttlesworth responded, “Go back and tell your Klan brothers that if the Lord saved me from this, I am here for the duration. The fight is just beginning.”

March 18, 1922 – Mt. Meigs, Alabama: Freddie Lee Robinson was born to sharecroppers. When he was a baby, his father left home and later when his mother married William Shuttlesworth he took his stepfather’s last name. He studied for the ministry at Selma University and earned a B.S. in English from Alabama State University in 1951. He preached at a Baptist church in Selma before becoming pastor at Bethel Baptist Church in 1953.

December 1956, Birmingham, Alabama: Encouraged by the successful NAACP bus boycott the previous summer in Montgomery, Alabama, led by Dr. Martin Luther King, Rosa Parks and others, Shuttlesworth planned for similar action in his city. On Christmas Day, he announced to his congregation that they would ride at the front of the city buses the next day.

The morning after the bombing, Fred Shuttlesworth’s congregation begged him to cancel the bus ride. “We’re going to ride,” he told them, “Find a crack to hide in if you’re scared, but I’m going to walk downtown after this meeting in this church and get on a bus. Boys step back,” he shouted, “And men step forward.” The police arrested the preacher and 21 others during the protest.

Several months later, when Shuttlesworth arrived to enroll his children at the all-white John Philips High School, a group of angry white men used coke bottles to smash his car windows and then beat him with brass knuckles and clubs. After crawling back to his car, he drove himself to the hospital and was treated for cuts, bruises and minor damage to his kidneys. That night from the pulpit he told his congregation he forgave his attackers. It was the second time in less than six months that a miracle had saved his life.

In 1957 when the state outlawed the NAACP Shuttlesworth co-founded the Southern Christian Leadership Conference to continue the protests. Despite being arrested more than 30 times and suffering multiple beatings, Fred Shuttlesworth remained a leader in the non-violent campaign for racial equality in Birmingham.

On May 2, 1963, Shuttlesworth was one of those at the front of the school children marching in the streets when police used fire hoses and German Shepherds to disperse the crowd. More than 600 people spent the night in jail, and Shuttlesworth spent the night in the hospital from being knocked to the street from the blast of a fire hose. It was this event, which finally moved the President and Congress to take action.