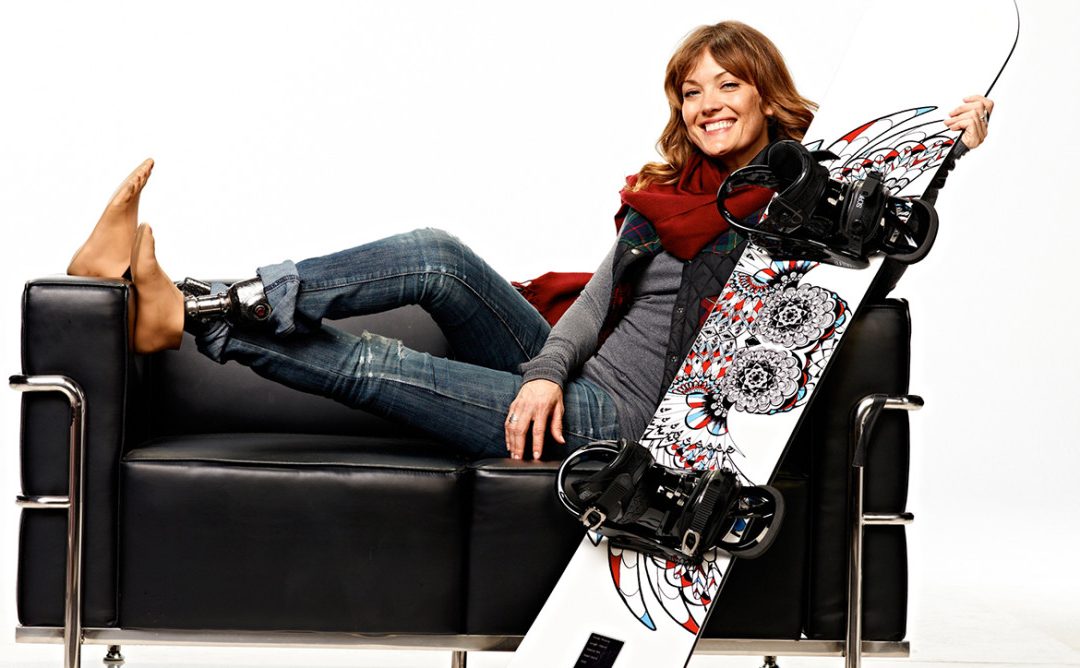 June 1999 – Las Vegas, Nevada: After a long day at work, 19-year-old Amy Purdy thought she was coming down with the flu. Less than 24 hours later, she was in the hospital in septic shock and on life support. The diagnosis was a rare form of bacterial meningitis with a less than 5% survival rate. Over the next two months, Amy lost her spleen, a kidney and both her legs below the knee.

Before leaving the hospital, Amy was fitted with her new legs. The stiff, clunky legs with yellow feet were painful and cumbersome. “How am I ever going to snowboard again in these things?” Amy asked her mother with tears streaming down her face. “How am I ever going to travel around the world?” Amy spent most of the next two months in bed, ignoring the artificial legs propped against her bedroom dresser.

Growing up in the hot Nevada desert around Las Vegas, Amy dreamed of traveling the world and living somewhere it snowed. At age 15, she went snowboarding for the first time and a piece of her dream fell into place. Snowboarding became a consuming passion and weekends found her making the 45-minute drive to the ski resort closest to her house.

The day after graduating from high school in 1998, Amy moved to Utah, because of the snow. She entered the Utah College of Massage Therapy. Upon completing the seven-month program, she accepted a therapist position at a world-class resort, Canyon Ranch spa in Las Vegas. Amy was living the dream, at least part of it, but she missed snowboarding on the weekends.

When Amy lost her legs, she thought her dream was over. One day as she lay in bed feeling sorry for herself, a question popped in her head. “If your life were a book, and you were the author, how would you want your story to go?” That question changed her paradigm and her life. It occurred to her that she was the author of her story and she began to dream of snowboarding again. If she could just get the right legs and feet, she knew she could snowboard.

Seven months after losing her legs, Amy was back on the slopes. But snowboarding with artificial legs was awkward and discouraging. It took a year, but with a prosthetic leg designer’s help, Amy finally got the right pair of legs. Those legs, and a wonderful birthday present from her father, a new kidney, enabled Amy to follow her dream.

In 2001, two years after losing her legs, Amy finished third in a snowboarding competition for adaptive athletes at Mammoth Mountain, California. Later that year, she won three medals at a U.S. Snowboarding Association event. In 2014 she won the bronze medals at the World Cup Para Snowboarding games in Sochi, Russia. That same year Amy finished as runner-up in the Dancing with the Stars competition.

Today at age 41, Amy Purdy is the only double-leg amputee competing at the world-class level in Para snowboarding. The actress, model, New York Times best-selling author and motivational speaker has been featured in Super Bowl commercials and has her own line of designer clothing. In 2005, Amy founded and continues to lead Adaptive Action Sports, a nonprofit organization that helps young disabled athletes go beyond their limits and compete in action sports.

“Losing my legs has not disabled me, but rather enabled me,” Amy says. “It forced me to rely on my imagination and belief in the possibilities. Our dreams can help us force through any borders.”