by peteblack4ua@gmail.com | Jun 1, 2018 | Adversity, Against the Odds, Chasing Your Dream 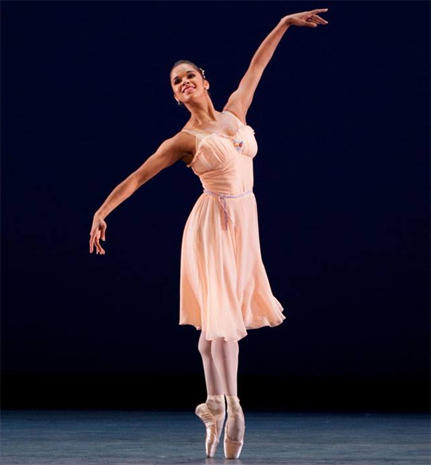 Summer 1997 – Los Angeles, California: Too disappointed to speak, fifteen-year-old Misty Copeland sat on the sofa in the living room of her ballet teacher, Cindy Bradley. Misty held the rejection letter from a top American ballet academy.

It read, “Thank you for your application to our ballet academy. Unfortunately, you have not been accepted. You have the wrong body for ballet. And at your age, you are too old to be considered.” Bradley hugged Copeland, “Misty, you’re perfect. God made you for ballet. And deep down, you know it too.”

Born September 10, 1982, Misty Copeland grew up in San Pedro, California, one of six children born to a single mother. Life was a struggle. The family moved around frequently. Every time her mother got a new boyfriend. At a low point, the family lived in two rooms at the Sunset Inn in Gardena, California.

Misty inherited an interest in dancing from her mother, a former Kansas City Chiefs cheerleader. At age 13, she discovered ballet on a basketball court at a Los Angeles Boys and Girls Club. Embarrassed that she did not have a leotard or ballet shoes, she watched a couple of classes before Cindy Bradley, the instructor, encouraged her to give it a try.

In the summer of 1997, after Misty received the disappointing rejection letter Bradley reassured her, “You are the most gifted dancer that I have ever seen. You have the talent to be a professional ballerina.” That summer Misty studied at the San Francisco Ballet Company and later that year she won the Los Angeles Music Center Award as the best dancer in Southern California. When her mother moved yet again, Misty moved in with Bradley so that she could focus on her ballet. She rode the bus two hours to visit her family on weekends.

The following summer, Misty studied at the prestigious American Ballet Theater in New York. Post-puberty and curvy, at 5’2” and a 100 pounds, she didn’t fit the rail-thin, porcelain-skinned ballerina mold. When an instructor told her that she needed to lose weight, she left his office in tears – uncertain she would ever be a prima ballerina.

In 2000 after high school graduation, Misty moved to New York to apprentice with the American Ballet Junior Company. Eight months later, she fractured a vertebra in her back and was forced to stop dancing for a year. Doubting her ability and believing the critics, she overate and quit going to class. Misty wrestled with returning to California but her American Ballet mentor talked her into staying. She had an opportunity to break down barriers and inspire others.

In 2007, the American Ballet promoted Misty to one of the solo dancer positions. She danced for five more years before landing a lead role in the ballet Firebird. However, after only one performance, a stress fracture to her leg forced her to drop out for the season. Surgery and more self-doubt were the aftermath.

On June 30, 2015, 33-year-old Misty Copeland became the first African American to become the principal ballerina in the 75-year history of the American Ballet Theater. A few months later, Time Magazine featured Copeland on of the cover as one of their 100 Most Influential People in the World.

“I had moments of doubting myself, and wanting to quit,” Copeland says. “I didn’t know if I could make it to this level. At the same time, it made me hungry to push through for the next generation of dancers.”

When Copeland dances at the Metropolitan Opera House, the Lincoln Center, or other New York ballet theaters, she draws large enthusiastic crowds to cheer her success. Outside the theaters little girls line up waiting on Misty to sign her autograph – dreaming of what could be.