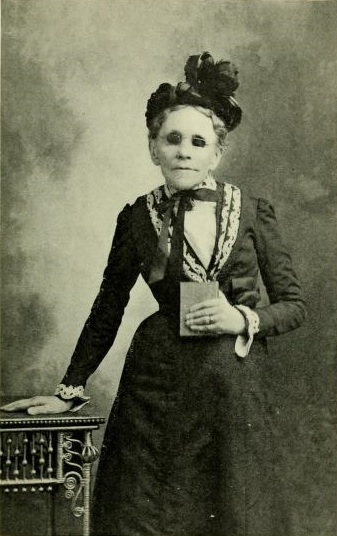 “Adversity is always unexpected and unwelcomed. It is an intruder and a thief, and yet in the hands of God, adversity becomes the means through which His supernatural power is demonstrated.”                  Charles Stanley

April 1820 – Putnam, New York: The 6-week-old baby developed an eye infection, and the country doctor recommended a hot mustard plaster be smeared on the infant’s eyes to draw it out. Although the baby’s mother protested, the doctor reassured her it was the only way to cure the infection. The plaster blistered the eyes, causing blindness.

Frances Jane “Fanny” Crosby was that baby born in 1820, on a farm in Putnam County one hour north of New York City. Fanny’s father died a year after she was born and her 21-year-old mother, Mercy, had to work as a maid to support herself and her baby.

While her mother cleaned houses, Grandmother Eunice kept Fanny. She described in detail for the child the wonders of God’s creation – the beauty of trees, flowers, birds, insects, sunsets and sunrises. Eunice routinely read the Bible to Fanny, who could memorize scripture passages after hearing them read a couple of times. By age 12, Fanny memorized the first five books of the Bible, the four gospels, Proverbs and many Psalms.

At age 15, Fanny moved to New York City to attend the New York Institute for the Blind. She studied music, history, literature, religion and philosophy with an insatiable desire to learn. After graduation, she became a teacher at the institute and remained on the staff for 23 years. Fanny became well known in local circles for the songs and poems she wrote while at the institute.

In March 1858, at age 38, Fanny married Alexander van Alstine, a former student and institute music teacher. They rented a tiny apartment in Manhattan’s poorer lower East Side. Two years later, Fanny signed a contract with publisher William Bradford to write hymns for $2 per song. She routinely wrote two to three hymns a day, and it wasn’t unusual for her to write six or seven.

Dwight L. Moody’s evangelistic team introduced Fanny’s hymns to churches across America and Europe. Her music was an essential part of Moody’s ministry success. Fanny and Alexander gave their time and most of their money to the Bowery’s Water Street Mission, the first rescue mission in the country to help alcoholics and those down on their luck.

Because some publishers were reluctant to have so many hymns written by one person in their hymnals, Fanny published under 200 different pseudonyms during her career. She was often invited to the White House to be the guests of presidents and she frequently read her poems before Congress. In 1885, Fanny played the piano and sang one of her hymns, Safe in the Arms of Jesus, at President Ulysses S. Grant’s funeral.

Fanny Crosby wrote hymns and played the piano until she died in 1915, a month before her 95th birthday. She considered her handicap a blessing. According to Fanny, “We all have sorrows and disappointments, but it seemed intended by the blessed providence of God that I should be blind all my life, and I thank Him for the dispensation. I might not have sung hymns to the praise of God if I had been distracted by the beautiful and interesting things about me.”

One hundred years before Elvis was the “King of Rock and Roll,” Aunt Fanny was the Queen of American Hymn Writers. She is among the most prolific songwriters of all time, having written more than 8,000 hymns during her lifetime. Today, a century after her death, more than 100 million copies of her songs remain in print and her most popular hymns can still be found in church hymnals in America.