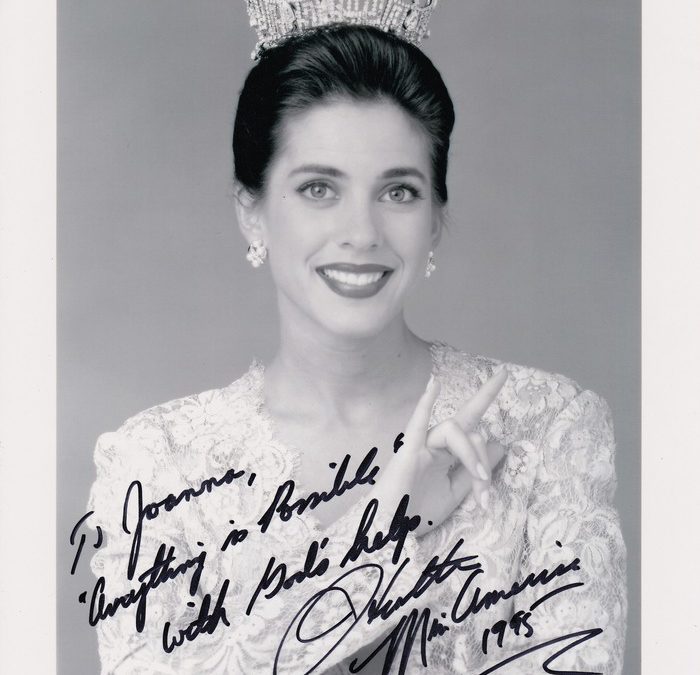 In her silent world, Whitestone did not hear Philbin’s comment. Knowing that the winner usually cried, she looked at Johnson. There were no tears. The 21-year-old dancer from Jacksonville State University, deaf since 18 months of age, was crowned the first Miss America with a disability in the 75-year history of the pageant.

Whitestone was born February 24, 1973, in Dothan, Alabama. A severe case of Haemophilus Influenza caused her to lose her hearing. Despite the situation, her parents refused to see her as disabled. Heather’s mother told her when she was a young girl that in America anything was possible, emphasizing that the last four letters of ‘American’ spell ‘I Can.’

Heather’s mom enrolled her in a ballet class at age five, hoping that dancing would enhance her speech rhythms. Heather fell in love with dancing. She could feel the vibration of the sound and she learned to keep time with the music by counting and memorizing the beats. While expressing herself in words was difficult, expressing her feelings by dancing came naturally.

Instead of communicating with sign language, Heather learned to read lips and speak. In the fourth grade, she read a book about Helen Keller and Keller became a source of inspiration for life. Heather’s deafness, like Keller’s, developed in her a fierce independence and a strong will. She believed her mother that anything was possible.

At age 11 Heather transferred to the Central School of the Deaf in St. Louis, Missouri, where she learned to sign and interacted with students from all over the world. After three years in St. Louis, she returned to Dothan. When she was 16, her parents divorced and Heather moved with her mother to Birmingham. She graduated from Berry High School in 1991.

Heather chose Jacksonville University because of a special program to streamline deaf students into regular classes. Needing scholarship money, she wrestled with the idea of competing in beauty pageants. Would she be able to hear the judges? She wasn’t like other girls, could she compete?

Despite her reservations, she won the Miss Jacksonville State University pageant and to her surprise was runner-up in the Miss Alabama pageant in 1992. In 1993, she again was runner-up, before winning the title of Miss Alabama on her third try the following year.

In September 1994, Heather flew to Atlantic City with no inkling that she might win. She didn’t dare dream that big. She was just happy for the experience. Before an adoring and supportive audience, she performed a ballet to the song Via Dolorosato win the talent competition.

Heather also won the swimsuit competition on her way to becoming the first and only disabled Miss America in pageant history. During her year of service as Miss America, she traveled 20,000 miles per month speaking in a different city every other day. She used the opportunity to share her message that anything is possible.

Today, Heather Whitestone McCallum lives with her husband and their three sons in St. Simons, Georgia. She has written three books including, Listening with my Heart and Believing the Promise. She is a former board member of the Helen Keller Foundation and a motivational speaker.