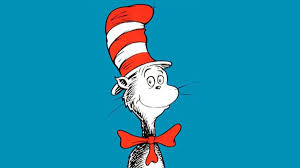 1937 – New York City: Ted Geisel was at the end of his rope. As he walked down Madison Avenue to his apartment, he made a decision. He would burn the manuscript in his apartment incinerator – 27 rejections were enough – his book would not be turned down again. His wife, Helen, was wrong. Writing children’s books was not for him.

Two blocks later, Geisel bumped into Mike McClintock, a classmate of his from Dartmouth College who he had not seen since they graduated. Geisel discovered that McClintock had been promoted that morning to children’s editor at Vanguard Press, located a few blocks away.

Pointing to the manuscript Geisel was carrying, McClintock asked, “What is that?” Geisel responded, “A book no one will publish. I’m lugging it home to burn.” McClintock took him to his office, and a few hours later Geisel signed a publishing contract for his first children’s book And to Think I Saw It On Mulberry Street.

Theodor Seuss Geisel was born in Springfield, Massachusetts, in 1904. His parents were German immigrants and his father was in charge of the small Springfield Zoo. As a child, Ted loved to accompany his father and mother on walks to the zoo where he took his pencil and sketchpad to draw the animals. With his parent’s encouragement, Geisel drew animal caricatures on his bedroom walls.

Geisel earned a degree in English from Dartmouth College in 1925. Then he attended Lincoln College – Oxford, England, with plans to earn his doctorate in English Literature. After two years, he married Helen Palmer and dropped out of school. Amazed by the strange and fascinating animals Geisel was always drawing, Helen persuaded him to move to New York City to pursue a career as an illustrator and cartoonist.

In July 1927, three months after arriving in New York, 23-year-old Geisel sold his first cartoon to The Saturday Evening Post for $25. Over the years, he worked for Vanity Fair Magazine, Life Magazine, Redbook and Standard Oil, among others. Along the way, he also worked as a political cartoonist for several New York newspapers.

Although Mulberry Street received glowing reviews in 1937, sales were lackluster at 31,000 copies. Geisel chose the pen name Dr. Seuss – Seuss was his mother’s maiden name – believing that using the title of doctor made him seem smarter, but it was also a poke at a doctorate never earned.

Over the next two decades Dr. Seuss published a dozen children’s books, but it was The Cat in the Hat in 1957 that finally supercharged his career. The book sold a million copies in the first year. It led to the founding of Beginner Books at Random House publishing dedicated exclusively to his book sales. Dr. Seuss followed with How the Grinch Stole Christmas and Green Eggs and Ham, his most popular book.

In 1994, Theodor Geisel was awarded a Pulitzer Prize “for his contribution over nearly half a century to the education and enjoyment of America’s children and their parents.” Many of Dr. Seuss’s 60 children’s books remain bestsellers today. His books have sold more than 600 million copies in 20 languages, which places Dr. Seuss in the top 10 best selling fictional writers of all time.

Theodor Geisel’s birthday, March 2, is referred to as Read Across America Day or Dr. Seuss Day. It was established in the early 1990’s to commemorate the influence Dr. Seuss’s books have had on child literacy and reading enjoyment for more than eight decades.