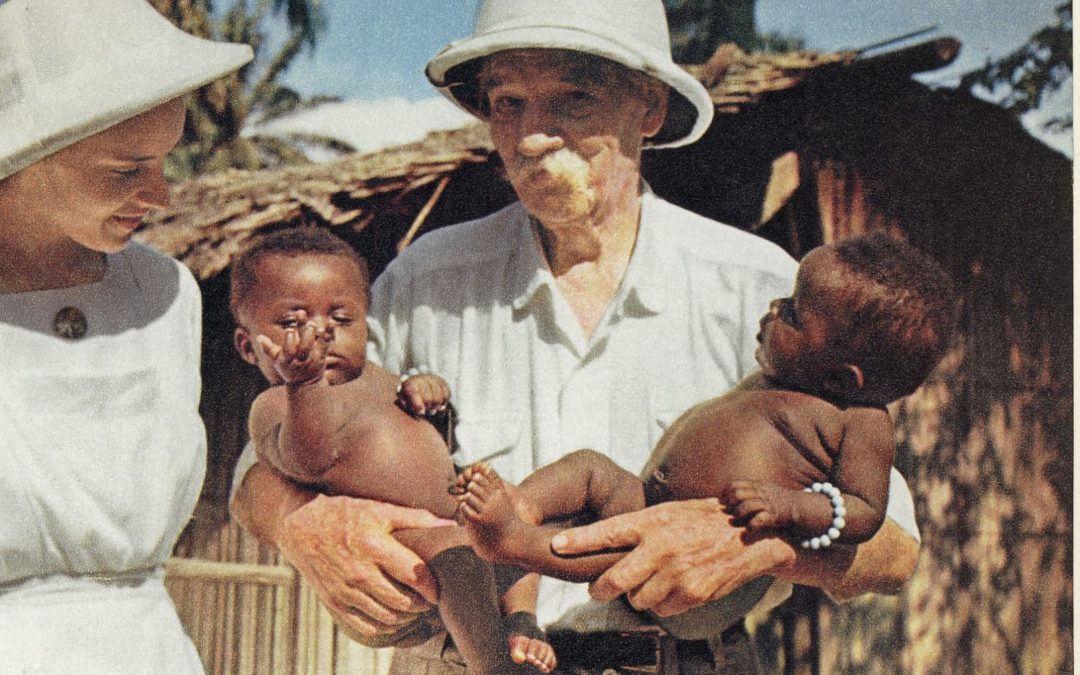 1904, Strasbourg, France: Albert Schweitzer, a 30-year-old Lutheran minister and theology professor at the University of Strasbourg, was paging through a Paris Missionary Society publication when he read an article by a doctor about the dire medical needs of people in Africa. The story concluded, “Is there anyone who will hear the call and come to help these people?” Schweitzer dropped to his knees and committed, “I am coming.”

A year later Schweitzer, the son, and grandson of Lutheran ministers, resigned as chair of the theology department and enrolled in the university’s medical school over strong objections from family and faculty. It was his second career change. A musical prodigy, he played the organ in his father’s church at age nine. Everyone thought he would pursue a music career, but at 18 he entered the University of Strasbourg and earned doctorate degrees in theology, philosophy, and music. After graduation, Schweitzer joined the Strasbourg faculty and pastored St. Nicholas Church.

Schweitzer was 38 years old when he earned his medical degree with a specialization in tropical medicine and surgery. On Good Friday 1913, eight years after learning of the needs in Africa, he and his new wife Helene, a nurse, sailed for Lambarene, a small village in the Gabon province of French Equatorial Africa.

A month after arriving the Schweitzers started a medical clinic on property owned by the Paris Missionary Society, on the banks of the Ogowe River. The clinic was located only a few miles from the equator in the only available building, an old chicken house. During the first year, they treated more than 2,000 people for malaria, yellow fever, malnutrition, and worms.

During World War I, the Schweitzers, who were of German descent, were arrested in Lambarene and sent to France as prisoners of war. After their release from prison, Schweitzer devoted several years to raising money for his Africa project by performing organ concerts, giving lectures, and writing books. He had become a world-recognized scholar on the classical music of German composer Johann Sebastian Bach. Concert halls across Europe sold out wherever he performed.

After six years in France, the Schweitzers returned to Lambarene in 1924 to continue their work. Helene became a nurse anesthetist and worked shoulder to shoulder with her husband during surgeries. Dr. Schweitzer wore many hats – physician, surgeon, building superintendent, pastor, and chief fundraiser. In 1952, he received the Nobel Peace Prize for his humanitarian work. He used the $33,000 prize money to build a wing on his hospital for leprosy patients.

By the late 1950’s the Albert Schweitzer Hospital complex included 70 buildings, 350 beds, and a leper colony that could accommodate 200 patients. The volunteer staff included three doctors, seven nurses and 13 support team members. Helene labored alongside her husband until her death in June 1957 at age 79. She was buried in a small cemetery at the hospital.

September 1965 – Lambarene, Gabon: Except for occasional trips to Europe to raise money for supplies and equipment, Schweitzer remained in Lambarene until his death on September 4, 1965, at age 90. He died in the hospital that bears his name. A simple cross he made himself marks his grave, which is located next to Helene’s on the banks of the Ogowe River.

True to his commitment, Dr. Schweitzer took the road less traveled and journeyed to Africa. There in a steamy jungle location so remote that most of his colleagues feared to visit, he devoted more than half a century to serving people desperately in need of medical help.