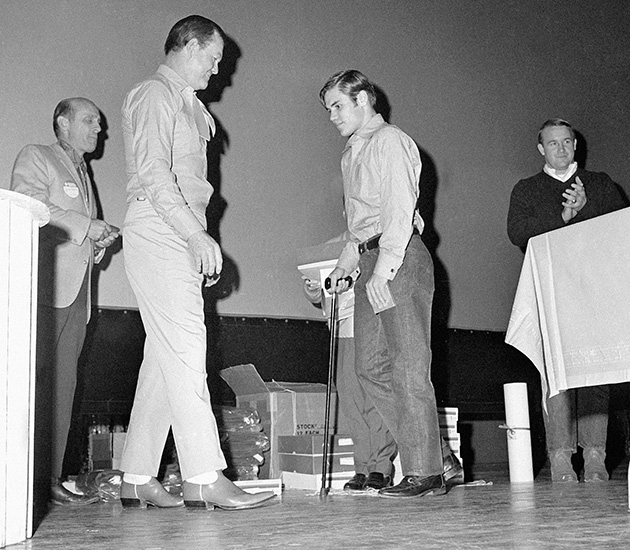 December 12, 1969 – M.D Anderson Cancer Institute in Houston, Texas: Doctors amputated Freddie Steinmark’s left leg at the hip. What he had hoped was a deep thigh bruise had been diagnosed as osteogenic sarcoma, a deadly form of bone cancer. Just six days before the surgery, Freddie had played safety for the University of Texas in the biggest football game of his life, and one of the biggest games in Texas football history.

In what ABC TV called the Game of the Century, in commemoration of 100 years of college football, No. 1 ranked Texas had beaten No. 2 Arkansas 15-14 to win the National Championship. On the Monday following the game, Freddie limped into Texas Coach Darrell Royal’s office and told him, “Coach, I am hurt a lot worse than I have been letting on.”

Freddie Joe Steinmark grew up in Denver, Colorado, in the 1950s with a football tucked under one arm and a baseball in the other hand. His father, who had been a professional baseball player, encouraged him in all sports. Freddie, who was smaller than most other players on his football teams, overcame his size by being fast and fearless.

Freddie once played in a Tiny Mite game with a broken arm and during his junior year in high school, he played three quarters of a game with a cracked fibula. Despite his size, 5’ 10” and 150 pounds, the University of Texas offered him a football scholarship because Darrell Royal liked the fight and spirit in the little safety.

In the summer of 1969, Freddie, a junior safety for the University of Texas Longhorns, began to notice a pain above his left knee. By the time Texas was 3-0 in late September, the pain was a chronic ache that kept Freddie awake at night. In early November, both his roommate and his girlfriend begged Freddie to tell Coach Royal about the severe pain in his leg, but he was determined to play in the Arkansas game.

By the Arkansas game, Freddie’s limp had become evident to the coaching staff. But because he had still not complained of an injury, and was playing well enough, the coaches decided to let him start against Arkansas. Freddie played for three quarters in the Game of the Century before the excruciating pain in his leg forced him to the sidelines. He had achieved his goal of playing in the national championship game.

The annual Texas Football banquet was held in January, roughly a month after Freddie’s amputation. When Coach Royal called Freddie’s name, he surprised the audience as he walked to the podium to receive his letterman jacket by making a slow, wobbly trek across the stage on his new prosthetic leg. There wasn’t a dry eye in the building as the crowd stood and for three minutes applauded the courage of the Texas safety.

On April 13, 1970, Freddie and Coach Royal met with President Nixon at the White House to mark the annual fundraising drive for the American Cancer Society. Three months later, Freddie died at the M.D. Anderson Cancer Institute. He had faced cancer with the same class, grace, and the fearlessness that he played football. His short life and his courageous battle with cancer became a national symbol of courage.

At Notre Dame football players touch the famous “Play Like a Champion” sign as they leave the locker room headed to the stadium. At Clemson, players rub Howard’s Rock as they run down the hill into the stadium. At the University of Texas, football players form the hook ‘em horns sign and touch a picture of Freddie Steinmark. Almost 40 years after his death, the legend of Freddie Steinmark still inspires young men to be fearless and brave.

“Keep your fears to yourself, but share your courage with others.”   Robert Louis Stevenson