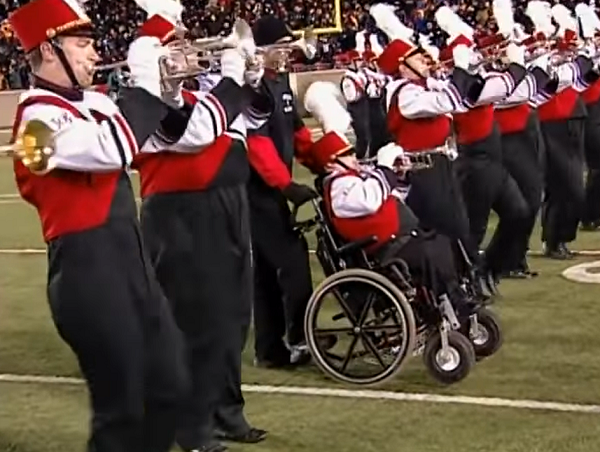 March 1988 – Louisville, Kentucky: Patrick John Hughes and his wife Patricia were heartbroken. They held each other and cried. “What did we do wrong?” questioned Patrick John. “We did everything by the book. You didn’t drink alcohol during your pregnancy. Why us? What did we do to deserve this? I don’t understand. I’m never going to play ball with my son.”

Their baby Patrick Henry was born without eyes. He was also born with pterygium syndrome, a rare condition in which the joints are rigid, preventing the limbs from straightening. Doctors told them their baby would never walk. Most of their dreams for their son died that day.

It took a few months, but the Hughes’ heartbreak began to fade. They accepted their baby’s limitations and decided to raise him like any other little boy. When Patrick Henry was a year old, Patrick John, a talented violin and piano player, sat with his toddler at their piano so he could plink the keys. To Patrick John’s amazement, within a week the baby could find any note his father played after only a couple of tries. He learned to play simple children’s tunes in a few weeks.

Patrick John was ecstatic. “Patricia, we’re not going to play baseball together, but we’re going to play music together. He may be a musical prodigy.” By the time Patrick Henry was 2, he was taking requests at the piano.

Despite being blind and wheelchair-bound, Patrick Henry was a straight A student and made the all-state band at Atherton High School. His incredible musical gifts on the piano and trumpet were well known in Louisville. When he enrolled at the University of Louisville, the band director, Dr. Greg Byrne, invited Patrick Henry to join the Cardinal Marching band. “Dr. Byrne, I am honored to be asked, but how will I march? I can’t see the field?” Byrne assured him they would figure it out.

Patrick John and Patrick Henry became the only two-person band members and the popular favorites in the 215-member Marching Cards band. It wasn’t easy for 45-year-old Patrick John. He worked the graveyard shift, 11 p.m. to 6 a.m., at FedEx, loading packages on planes. Then he slept from 7 a.m. to 11 a.m., had lunch with Patrick Henry and accompanied him to all his college classes before band practice in the late afternoon. Performing intricate band moves while pushing his 160-pound son in a wheelchair on a soft football field required hours of practice. They both loved every minute of it.

Today, the father-son team travels around the world sharing their amazing story. During their inspirational talks, Patrick Henry plays the piano, and his music captures the audience. When people hear him play, they are reminded of the possibilities and potential in their lives.

“Yeah, I’m blind and I don’t have the ability to walk, but it’s not a big deal,” says Patrick Henry   Hughes. “Crying, moaning and groaning about my situation isn’t going to change anything. God gave me the talent to play piano and trumpet and all the wonderful opportunities that go with it. We should always count our blessings. No matter how bad we think we’ve got it, there’s always somebody in the world that has it worse.”

Patrick John has made many sacrifices so that his musical prodigy son could realize his dreams, but he wouldn’t change anything. “Lots of my dreams for Patrick Henry died when he was born,” says Patrick John. “But God has done so much more than I could have imagined. A father could not ask for any more than the relationship I have with my son.”