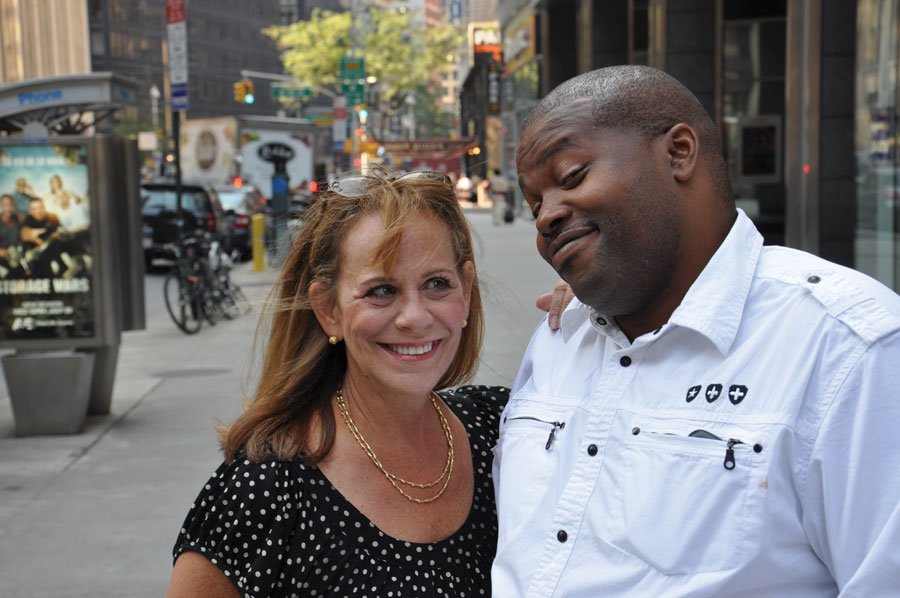 “You are to pay special attention to those who by accident of time, or place, or circumstances, are brought into closer connection with you.”     St. Augustine

Labor Day, September 1, 1986 – New York City: Laura Schroff, a 35-year-old USA Today ad executive, had planned to take clients to the U.S. Tennis Open. Heavy rain that morning canceled the Open and she found herself with nothing to do. Laura left her up-scale Manhattan apartment on 56th Street and went for a walk.

That same morning, a few blocks away, 11-year-old Maurice Mazyck woke up in a 12’ by 12’ room at the Bryant Hotel, a run-down welfare building that housed drug addicts, alcoholics and gangs. He shared the small dirty room with three sisters, several uncles, and a drug-addicted mother and grandmother. Maurice put on his grimy burgundy sweat suit, the only clothing he owned, and headed to his usual street corner at Broadway and 56th Street to beg for money to buy something to eat.

When Laura approached the intersection Maurice asked, “Excuse me lady, I’m hungry, do you have any spare change?” Laura barked, “No,” and kept walking. As she started across Broadway she stopped and walked back to Maurice. She had never seen a child begging for money. “I am not going to give you any money,” she told Maurice. “But if you are hungry, I will take you to McDonalds.” They each had a cheeseburger, fries, and a milk shake.

They met the next three Mondays at 7:00 p.m. at the same busy corner and went to dinner. On their fourth meeting, Laura bought Maurice his first steak at the Hard Rock Café. After a few months, she began to cook for him at her apartment. One Saturday in November, Laura got a call from Maurice, wanting to know if they could go to McDonalds. Laura discovered that he had not eaten since Thursday.

Laura bought Maurice new clothes. She offered to give him lunch money, but he asked if she could make his lunch and put it in a brown paper bag. Maurice explained, “When I see kids with their lunch in a brown paper bag, I know that somebody cares about them.” Thus began a tradition of Laura making Maurice’s lunch each day and leaving it in her apartment lobby.

One weekend, Laura took Maurice to her sister Annette’s house on Long Island. It was the first time Maurice had ever left New York City. He enjoyed riding bicycles with Annette’s three children, but the thing Maurice remembered the most about that the trip was enjoying a meal at a big table as a family. Maurice told Laura that when he grew up he would have a big table where all his family could eat together.

Laura gave Maurice his first real Christmas present, took him to his first major league baseball game, bought him his first bicycle and gave him something that he had never had – love and hope. Although Maurice dropped out of high school, he later completed the GED. Then he completed the two-year college program at Medgar Evers College in Brooklyn.

Maurice got a job as a security guard with Doar Security Company in New York City. Within six months he was promoted to supervisor. Then he started his own construction company to refurbish dilapidated apartment buildings.

Today Maurice and his wife Michelle have seven adult children. Maurice and his family try to get together with his adopted mother Laura once a month. She often comes over to Maurice’s apartment where they sit as a family around Maurice’s big dining table.

“At that busy street corner almost 35 years ago, Laura saved my life,” says Maurice. “I was going down the wrong road. The Lord sent me an angel. Without her, I would not be the man I am today.” Laura says, “Whatever I gave to Maurice, he gave me back ten-fold. He taught me courage, the true value of money, thankfulness, and the real meaning of love.” Laura has captured their story in the beautiful book An Invisible Thread. Proceeds go to support Partnership Share: No Kid Hungry.