by peteblack4ua@gmail.com | Mar 26, 2019 | Against the Odds, Determination Despite the Odds, Underdogs | 3 comments 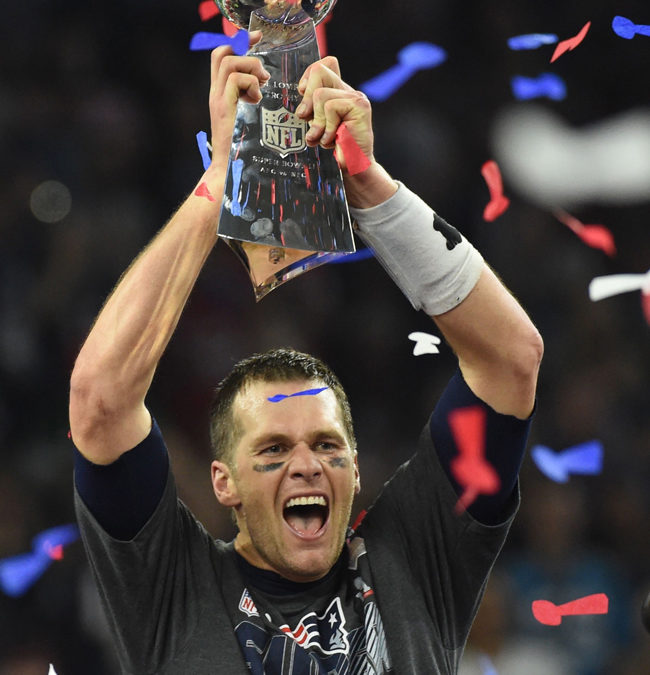 November 1996 – Ann Arbor, Michigan: Tom called his mother in California. He was ready to quit the University of Michigan football team. He had been seventh on the quarterback depth chart as a freshman and received a red-shirt. Now his sophomore season had been a big disappointment. A pre-season appendix operation took 30 pounds off his already skinny frame. He only threw five passes during the season – the first one of which had been intercepted and returned for a touchdown.

Tom’s mother encouraged him to stick it out. “The road to your destiny is never straight – there will be lots of twists and turns, you know that. Talk to your coach.” Tom sought out the athletic department counselor who persuaded him not to quit or transfer back to a California school closer to home.

Tom Brady was born in San Mateo, California in 1977. Though he was not the fastest or most talented high school football player, he was a coach’s dream. After school in the off-season, he went home, did his homework, and then headed to the gym for a three-hour workout. His coach was so impressed with Brady’s work ethic that he adopted his rigorous workout regimen for the entire team.

Brady’s four-year career stats at Junipero Serra High School – 13 touchdown passes, a 53 percent pass completion rate, and a total of 3,700 yards passing – did not land him on the college recruiting radar. At 6’4” and 175 pounds, he was considered too skinny and too slow for big-time college football. The only Division I school to offer a scholarship was Michigan.

Brady experienced more disappointment during his third season as quarterback for the Wolverines. He played in only four games, completing 12 of 15 passes for 100 yards. During his junior year, Brady split playing time with another quarterback and once again thought about quitting the team. His big break did not come until the eighth game of his senior year when Brady finally became the starting quarterback. He led the team to three straight wins and a 35-34 victory over the University of Alabama in the 1999 Orange Bowl.

The NFL scouting report on Brady read, “A skinny beanpole, does not run well, better arm than people give credit for, smart and hardworking – a gamble at best.” But Coach Bill Belichick of the New England Patriots saw something in Brady and took the gamble. They drafted Tom Brady 199th, in the sixth and final round of the 2000 draft.

In 2001, Drew Bledsoe, the Patriots starting quarterback, was injured in the second game, and Brady got his chance. In a Cinderella season, the 23-year-old became the youngest quarterback ever to win a Super Bowl. The Patriots traded Bledsoe after that season.

Today, 18 years later, 41-year-old Tom Brady is still the starting quarterback of the Patriots. He has led his team to nine Super Bowls and is the only quarterback to have won six of them – including a 13 to 3 win over the Los Angeles Rams on February 3, 2019. Brady holds the distinction of being the youngest and oldest quarterback to win a Super Bowl. He is the only player to have been the Super Bowl Most Valuable Player four times. Selected to 14 Pro-Bowls, Brady is the winningest quarterback in NFL history.

The slow, skinny, gamble-at-best Brady never quit. He thought about it many times while at Michigan, but he followed his mother’s advice and stuck it out. NFL analysts consider Tom Brady the biggest steal in the history of the NFL draft. The chances of a sixth-round draft pick winning a Super Bowl are five percent.