by peteblack4ua@gmail.com | Dec 24, 2018 | Courage Under Fire, Determination Despite the Odds, Never Give Up | 5 comments 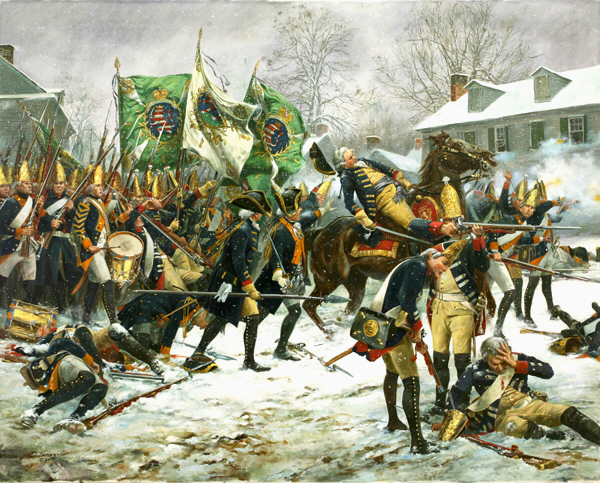 Christmas Eve 1776 – Outside Trenton, New Jersey: Annoyed by his barking dogs, Dr. John Riker ventured out into the snowstorm to investigate. He discovered a small regiment of soldiers on the road. Assuming they were British regulars, he shouted angrily at them to get off his property. To his surprise, James Monroe, an 18-year-old lieutenant leading a small regiment from the Virginia militia, called back to him.

James Monroe had recently dropped out of The College of William and Mary and joined the 3rd Virginia Regiment of George Washington’s Continental Army. Because of his education, he received an officer’s commission despite his age. Having crossed the Delaware River a few miles back, Monroe’s orders were to join General Washington in a surprise attack on the 1500 Hessian soldiers encamped 10 miles away at Trenton.

Time was quickly running out for Washington’s army. In a week, the one-year enlistment commitment would be up for the majority of his troops. Some had already deserted and gone back home. Washington knew that without a decisive victory, his short-lived army was probably doomed. If ever an army needed a victory for the morale of the troops and the confidence of a country, it was Washington’s pitiful group of Patriots.

Only four months earlier, Washington’s army had numbered 20,000 men. He had subsequently been driven out of New York and across New Jersey to his current winter camp in Pennsylvania. Having lost four consecutive battles, Washington was down to 3500 ill-equipped soldiers, and short on food, ammunition, and supplies.

Dr. Riker and his wife provided food and a short respite by the fire for Monroe’s soldiers. When Dr. Riker learned of Monroe’s mission, he got his coat. “I know something is to be done,” said Riker, “And I’m going with you. I am a doctor, and I may help some poor fellow.” Despite Monroe’s objections, the doctor went with the soldiers.

Under cover of darkness and a blinding snowstorm, Washington had quietly mobilized 2400 men, horses and artillery across the half-frozen Delaware River at McKonkey’s Ferry. Following a silent nine-mile march in the snow and sleet to Trenton, the battle began at 8:00 a.m. Monroe’s regiment came in on the north side of Trenton. They successfully captured the Hessian cannons.

The Hessian troops were caught entirely by surprise. The battle lasted just 45 minutes. More than 900 Hessians were captured, 22 were killed, 92 were wounded, and only three Americans lost their lives. James Monroe was almost one of them. He took a musket ball in his shoulder and the ball nicked an artery. He would have bled to death except for the intervention of his new friend, Dr. Riker. Lieutenant Monroe was the poor fellow Dr. Riker came to save on this Christmas Day.

News of the dramatic victory at Trenton spread rapidly throughout the colonies. The success brought hope to the Patriots and reinforcements to the Continental Army. It also shocked England and helped convince potential allies France and Spain to eventually join the cause of the young nation.

In 1777, Monroe was promoted to major and rejoined Washington and the Continental Army at Valley Forge for the remainder of the war. His political career began in 1782 when he was elected to the Virginia House of Delegates. He served two terms as Governor of Virginia, twice as Ambassador to France, and as a Senator before being elected the fifth president of the United States in 1816. He served two terms.

James Monroe died July 4, 1831, 55 years after his providential encounter with Dr. John Riker on a snowy Christmas Eve. He is one of three presidents, including Thomas Jefferson and John Adams, to die on Independence Day.